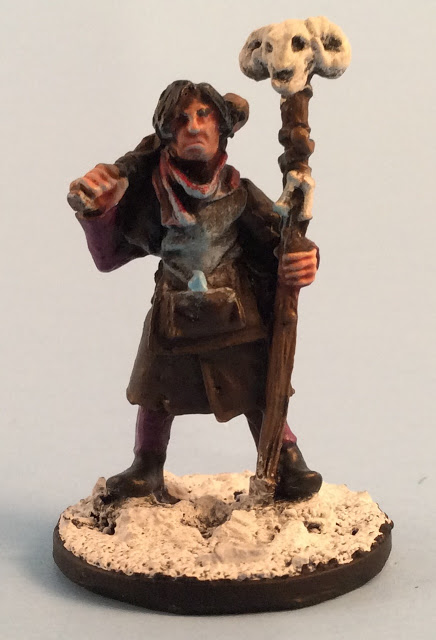 This comparative post compares Wizards, from the Original Frostgrave, to Wardens, of the new Frostgrave: Ghost Archipelago. This analysis is at the figurative level with observations straight out of the rule books. It does not represent an actual battle. No Wizards or Wardens were hurt in the making of this post.  🙂

The Novel in Play

The novel I have slowly been reading through and enjoying. Some authors I like better than others, but that all comes down to personal taste. In one of the stories, a Warden casts a spell with no apparent effect, minutes later a lightening strike comes down and kills a man. At the end of the story, it was clear this lightning strike was intentional. At the time, I thought that there wouldn’t be specific rules to recreate this situation, but I was wrong.

When I read the Ghost Archipelago rule book I came across a spell called Lightening Strike. It captures the essence of the above description perfectly. With this spell, you choose a target (within 20″ and line-of-sight) and at the end of the targets next round, a +6 lighting blast comes down and strikes that character. When I read this spell description, I thought – “my goodness, they got it.” That description captures perfectly the effects of the lightening spell in the novel!

Now that Lightening Strike spell is cool, but there is a comparative spell in the original Frostgrave.

In comparison to the original Frostgrave, the Lightening Strike spell matches up well to Elemental Bolt. Both have the same casting value, but Elemental Bolt works immediately, is a +8 attack spell, and a limitless range (within line of site).

It is clear to me when I compared the two spells, that the Original Frostgrave spell is much superior to the new one in Ghost Archipelago. I then went through the rest of the spells to see if this trend is uniform between the two books. For the most part, it is. The Wizard Frostgrave spells are simpler to work out and are more powerful than Warden spells in Ghost Archipelago.

As you can see from the small sampling above, many of the spells have similar effects between the two books, but the spells in the Original Frostgrave seem more powerful. I find that the difference in spell effects instantly means that the Frostgrave Wizard more powerful than the Warden in most cases.

As an interesting note, the spell effects in GA add more conditions and complications to the spells (such as Lightning Strike hitting its target at the end of the target’s turn). These new conditions make the spells different (and perhaps more strategic) than those in Frostgrave and should lead to more advanced game play where players use their Wardens as support characters rather than as the main power force in a warband.

Statistics wise, the Warden is more powerful than an Apprentice, but not as powerful as a Wizard.

The next obvious question is who is more powerful – The Heritor or the Wizard?   🙂

Hopefully everyone enjoyed this quick article about the Warden versus the Wizard.

How has COVID-19 affected your gaming?