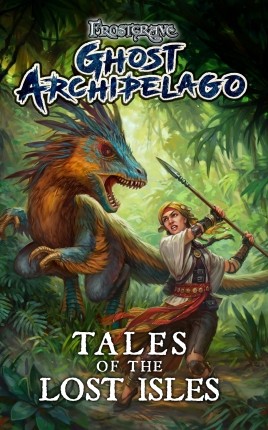 I will be honest, one of the things that attracted me to the Original Frostgrave was that the rulebook did not spend a lot of time building a gaming world. I really liked this as it let me use whatever models I wanted and also build my own gaming world. Of course, I used the descriptions in the rule book as a framework for a starting point, but the freedom was there to adapt the setting if I wished.

In today’s post, we are shinning a quick spotlight on three Frostgrave books. If you have read the books (or are in the process of reading them), please feel free to leave your opinions of them in the comments section at the end of this article.

This book contains nine short stories and a gaming scenario.

As I read through the stories, I find myself wondering if Osprey gave each author a certain direction with rules, creatures or descriptions that they wanted covered in the stories. Why? Because as I read the stories, I recognize the ways that they tie right into the rulebook of Ghost Archipelago.


I won’t include any spoilers to the novels in this article, but I did talk a little bit about how perfectly the rules fit the descriptions in my post about Wardens vs Wizards.

As I continue to enjoy the book, I see more and more rules reflected in the stories. I find that enjoyable.

Below is the description of the book from Osprey Publishing’s website.

The Ghost Archipelago has returned. A vast island chain, covered in the ruins of ancient and otherworldly civilizations, the Archipelago appears every few centuries, far out in the southern ocean. At such times, pirates, adventurers, wizards, and legendary heroes all descend upon the islands in the hopes of finding lost treasures and powerful artefacts. A few, drawn by the blood of their ancestors, search for the fabled Crystal Pool, whose waters grant abilities far beyond those of normal men. It is only the bravest, however, who venture into the islands, for they are filled with numerous deadly threats. Cannibal tribes, sorcerous serpent-men, and poisonous water-beasts all inhabit the island ruins, guarding their treasure hordes and setting traps for the unwary.

This book of fiction collects all-new stories set in the Ghost Archipelago.

Frostgrave: Tales of The Frozen City

Short stories is something I have always enjoyed. I read plenty of short stories by H.P. Lovecraft, Edgar Allen Poe and other authors in the past and like short stories because they are easy to pick up and put down.

Tales of The Lost Isles is the second collection of short stories set in Frostgrave. The first book was set in the original setting and called Tales of the Frozen City.

I missed this book, but below is a description of the book from Osprey Publishing’s website.

Long ago, the great city of Felstad sat at the centre of a magical empire. Its towering spires, labyrinthine catacombs and immense libraries were the wonder of the age, and potions, scrolls and mystical items of all descriptions poured from its workshops. Then, one cataclysmic night, a mistake was made. In some lofty tower or dark chamber, a foolish wizard unleashed a magic too powerful to control. A storm rose up, an epic blizzard that swallowed the city whole, burying it deep and leaving the empire as nothing more than a vast, frozen wasteland. The empire shattered, and the magic of the world faded. As the centuries came and went, Felstad passed from history to legend and on into myth. Only a few wizards, clinging to the last remnants of magical knowledge, still believed that the lost city had ever actually existed. But their faith was rewarded. After a thousand years, the fell winter has passed. The snows have receded, and Felstad has been uncovered. Its buildings lie in ruins, overrun by undead creatures and magical constructs, the legacy of the empire’s experiments. It is an evil, dangerous place. To the few hardy souls who inhabit the nearby villages, the city has acquired a new name, ‘Frostgrave’, and it is shunned by all right-thinking people. For those who seek power and riches, however, it is an unparalleled opportunity, a deadly maze concealing secrets of knowledge long forgotten… This new fiction anthology collects ten stories of wizards and adventures as they venture into the ruins of the Frozen City.

The newest Forstgrave book is actually a full blown novel by Matthew Ward called Second Chances. This book is based in the original frozen world of Frostgrave and like Tales of The Lost Isles, features a scenario written by Joseph McCullough.

The book is described on Osprey Publishing’s website as follows.

Time is running out for Yelen and Mirika Semova. Though the sisters have earned an enviable reputation amongst their fellow explorers of the Frozen City, their lives are haunted by a curse – the more Yelen uses her magic, the closer the demon Azzanar comes to claiming her, body and soul. But Azzanar is not the only one manipulating Yelen and Mirika…

When catastrophe separates the Semova sisters, it falls to Yelen to save them both. But in a city shrouded in deceit, who can she turn to for help… and what price will she pay to get it?

For those that want to know more about this book, Osprey has done something very cool and made the entire first chapter free as a sample on the web. Feel free to head on over there and read the chapter to see if you are interested in more.

Osprey Games remains a company that impresses me. I really like that they created a family friendly environment with their Frostgrave game. I also really like their consistent positive representation of women in their books and art work. Both Second Chances and Tales of The Lost Isles feature nicely clothed women in powerful positions on their covers.

I believe that the next book that we will see will be a novel for Ghost Archipelago if Second Chances sells well. I don’t have an inside scoop, but that is my guess.

Who should pick these books up?

Personally, I am enjoying Tales of The Lost Isles. While the book has my imagination sparked up for the game, I don’t think you need to be a gamer to enjoy the stories.

These books would also be nice for non-gamers interested in Fantasy settings. If they enjoy the books, you could say, “hey, did you know that Frostgrave is also a game that we can play.” 🙂

I am always looking to get more people interested in our hobby and sometimes think of novels based on games as a tool to make the world of tabletop miniatures less marginalized. In fact, that is one of the mandates of Must Contain Minis – to show that there are other great games out there aside from the largest one in most retail shops. I would like to see our community grow and flourish and I think that products, like these books (which are based on the game but something separate at the same time), help with that goal.

Aside from potentially introducing new people to this game, these books are aimed perfectly at the people who already like the Frostgrave game setting. So far, I have found that the book has only enriched my experience of the game.

Finally, one of the things that I like about these novels is that I can enjoy them anywhere and not get strange looks. That is not always the case when I travel with my rule books. It is always nice when someone asks about the book that I am reading and then I can tell them about miniatures gaming in general and point them to my website, Must Contain Minis, too.  🙂

Must Contain Minis has a Sales Affiliate Relationship with Amazon, RPGNow, DriveThruRPG, and the Wargame Vault. This article includes affiliate links. If you visit one of the sites from the links on this page and make a purchase, a portion of the sales goes to supporting Must Contain Minis at no extra cost to you.