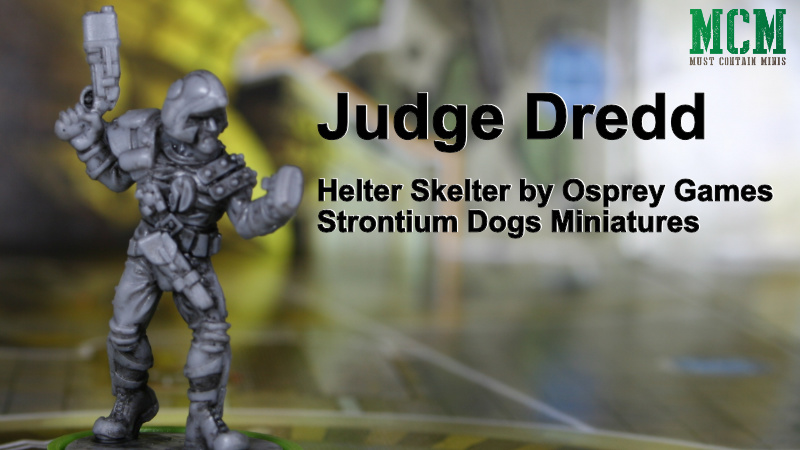 In this post, I show off the Strontium Dog miniatures as found in the Osprey Games‘ Judge Dredd: Helter Skelter board game. The miniatures in this post are as found when you open the board game box. They come pre-dipped so you can get started right away with well shaded miniatures. This post is a continuation of my other Judge Dredd Miniatures posts for this board game. You can also check out my posts about the miniatures of the Judge Faction and the miniatures for the Slaine Family.

In the interest of full disclosure, Osprey Games sent me a copy of the Judge Dredd: Helter Skelter Board Game for review purposes. It is a lot of fun and I have a review of the game over on Bell of Lost Souls.

Now, let’s get to those miniatures!

The Strontium Dogs represent a band of head hunters from the Judge Dredd universe. These mutants are good in a firefight and enjoy the benefits of cover more so than any other faction.

Middenface McNulty packs a great deal of long ranged power. He brings to the table the only explosive attack of the group. He also has plenty of long range attacks and good cover cards to avoid the ranged attacks of others.

This woman with vampiric powers happens to be an absolute monster in melee combat. One of my favourite strategies with her is to take a hit or two and regenerate those wounds by scoring hits in melee combat. That’s right, she heals herself whenever she hits an enemy with a melee attack.

Johnny Alpha is my favourite of the Strontium Dog miniatures. He has psychic powers and the most ranged attacks in the group. Using his psychic powers, he can bend the path of bullets to miss him and can cause enemies to lose focus (their game cards).

Meet Wulf Sternhammer. He carries a giant warhammer and can go toe-to-toe against almost anyone. He has the most melee attacks of the whole group and two of those attacks actually hit extra hard!

Aside from team fight and ranged attack cards, the Gronk has no attack ability of his own. He is actually a doctor and healer. His ability is to heal the others in the group. I use him as a distraction and to collect “shards of reality.”

This concludes our individual look at each miniature. Now, let’s take a look at how these miniatures scale against other miniatures. If you are into miniature agnostic games (like most of Osprey Games titles), this will be of interest to you.

Personally, I prefer scale comparison pictures of miniatures side by side miniatures of other systems. Despite this, I get a lot of email asking me to place a ruler in the mix so people can better judge the size of the minis. For the first time, I include two such photos.

The scale comparison pictures above wrap up my Strontium Dog Miniatures post. While looking at these miniatures keep in mind, these miniatures come in a board game, and a good one at that. Osprey Games pre-washed the minis to make them look good right out of the box. This helps them stand out from miniatures that come with other companies’ games.

What do you think of these miniatures? Also, which type of scale comparison pictures do you prefer – the ones with the ruler or without?

If you want more Judge Dredd: Helter Skelter content, I have a review of the game on BoLS as well as miniature breakdowns of each of the factions. I have articles looking at the Nikolai Dante’s faction and the Strontium Dogs. I also an article looking at the Slaine Family too. Be sure to check all of this content out!

Lannister Miniatures Showcase – Round Up – A Song of Ice and Fire