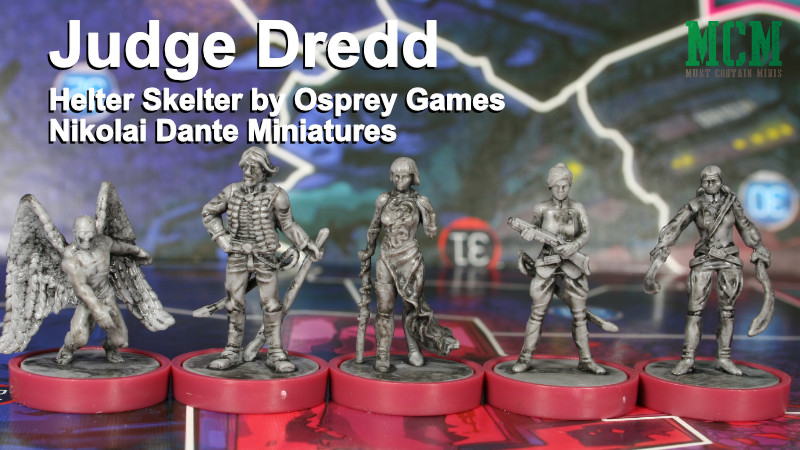 This post marks the fourth article looking at the minis in the Judge Dredd: Helter Skelter Board Game. This game by Osprey Games is a blast and contains fairly nice minis for a board game. They even come pre-washed, so they look good right out of the box! This time around, I am showcasing the Nikolai Dante Miniatures in this game. Now, let’s take a closer look at the group.

The Nikolai Dante Gang is a force to be reckoned with. This group is fast and good at close-quarters combat. In fact, they even have a Demon on their side with the ability to make melee attacks at an extended range. Pretty cool. So, let’s take a look at the members of this group.

Viktor Romanov is the fastest member of the group and he can fly. On the downside, he has absolutely no ranged attacks.

Jena Makarov excels at helping her allies move around the game board. She is also good at ranged attacks. She has the most long-range attacks in the entire group.

While Jena is a natural born leader, Nikolai Dante is the true leader of this group. He carries a sword and a very powerful gun. That gun can make long ranged attacks and up-close powerful attacks too.

Elena Kurakin is Nikolai’s body guard. Personally, I use Elena to hunt down enemy units. She is the best in the group for melee combat.

Lulu Romanov possesses demonic powers. She can actually use her melee attacks in adjacent spaces as well as the same space as an enemy. Other characters have to be in the same game space to make a melee attack. This gives Lulu a true edge in melee combat.

As with all of my miniature reviews, I like to add in a scale comparison shot or two. So, let’s see how the minis scale versus others. In today’s post, we compare the minis to a Bolt Action miniature.

There you have it. The Nikolai Dante faction is a great faction to take if you like fast moving and hard hitting melee fighters. All of these characters can fight extremely well, but only two of them have ranged attacks. The only group with fewer ranged attacks is the Slaine Family.

Hopefully you enjoyed this look into Nikolai’s gang.

If you want more Judge Dredd: Helter Skelter content, I have a review of the game on BoLS as well as miniature breakdowns of each of the factions. I have articles looking at the Judges and the Strontium Dogs. I also an article looking at the Slaine Mac Roth group too. Be sure to check all of this content out!

Combining Conan with Frostgrave: Painting Up Conan The Boardgame (by Monolith)

Review and Showcase of my “Outlander” Gang