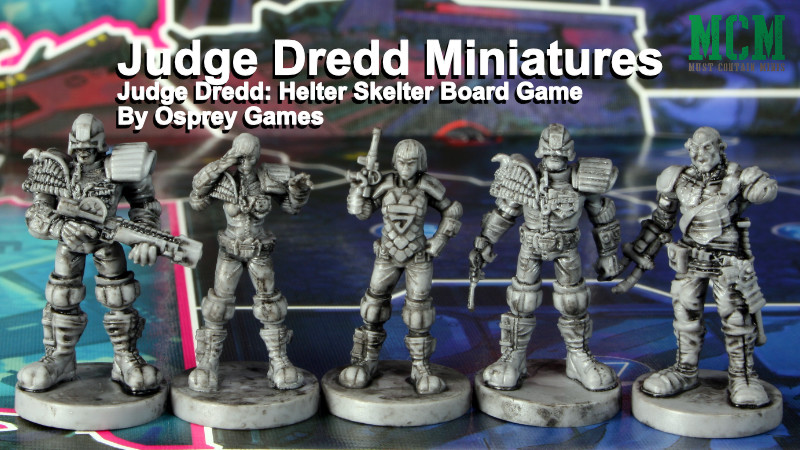 In this post, we take a look at the miniatures of “The Judges” in Osprey Games‘ Judge Dredd: Helter Skelter Board Game.

Judge Dredd: Helter Skelter is Osprey Games’ second miniatures board game. They based the rules off of their first miniatures game, Wildlands. Like Wildlands, you play as one of four factions in search of “shards of reality” (aka treasure gems) with the added objective to take out the other group’s faction members. The game handles two to four players with simple and quick rules. This post, however, is not a review of the game. Instead, we will focus in on the miniatures in Judge Dredd: Helter Skelter.

Like WildLands, the miniatures in this board game look great and come pre-washed. The core box comes with 20 miniatures and in this post, we look at five of those minis. Specifically, I showcase the miniatures of “the Judges” faction. Basically, this is the team that you take if you want to play as Judge Dredd and his allies.

If you want to play as Judge Dredd, this is the faction that you want to take! They are the law of Mega-City One and act as the Judge, Jury and Executioners of criminals. They are fast in a group, fight hard and are not scared to get their hands dirty in the name of justice. Their defense levels are also fairly good.

Now, this violent law enforcer is not just a one man army (although he could be). He also happens to have help with him. Now, let’s take a look at the Miniatures of the “Judge” faction.

Judge Giant fights well in melee but hits even harder with his shotgun. 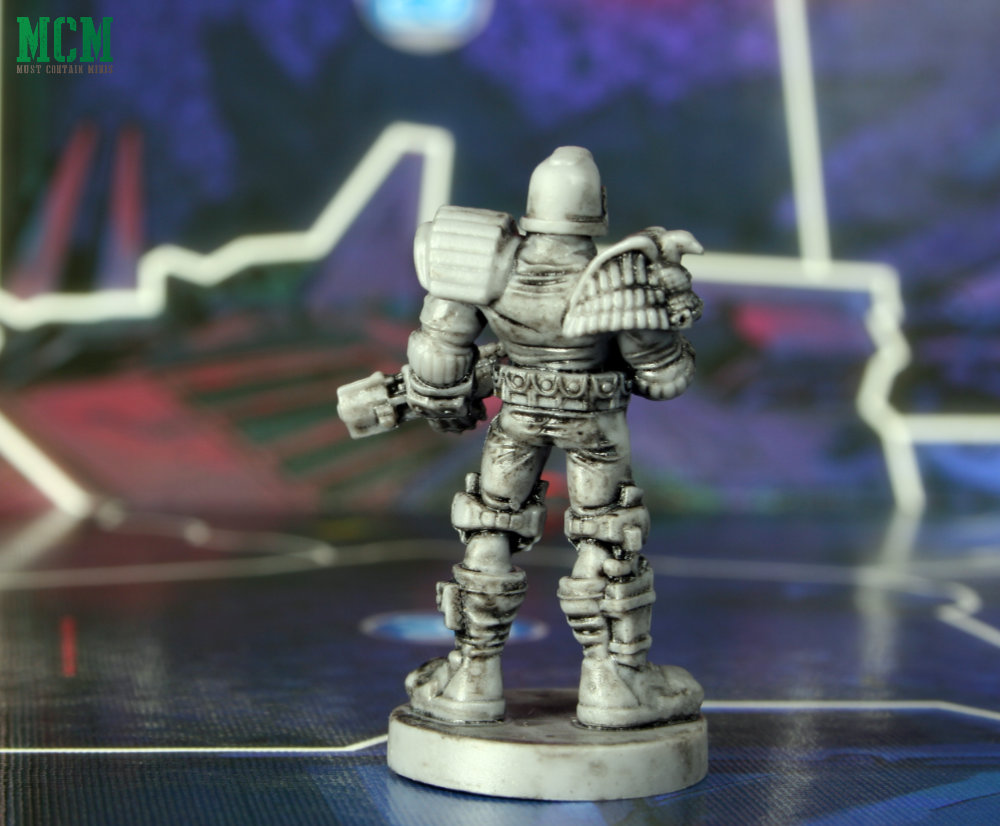 This is Judge Anderson. She happens to be a Judge with Psi abilities. Psi abilities basically allow you to reduce the cards available for your target. If the other player has no cards left for that character, that character takes a damage instead. She is also an okay commander and able to instruct those around her to move on her turn.

Chief Judge Hershey is a master at moving her teammates around quickly. Her combat abilities are also fairly good. She is the leader of the Judges.

This is Judge Dredd, the one man army as far a Judges are concerned. He is not super powerful in the game, but he is the best all-round character on the Judges’ side. He also happens to be the most powerful in terms of cards available, but he is not overpowering like one might think.

Mean Machine is the melee monster of the Judges’ faction. He hits extremely hard and has the best defense options of the whole group.

Comments on the Quality of Miniatures

The miniatures in Judge Dredd: Helter Skelter are all of a very good quality (especially for being board game miniatures). Personally, I really like that Osprey Games pre-stained these miniatures. That means that you can use these miniatures on the tabletop right away and they will look great. They did the same thing with Wildlands, and those miniatures also look great.

I am going to see if I can get someone to paint these miniatures up for me to see how they look when they are painted. Overall, I think they are pretty good even unpainted.

Osprey Games continues to pump out top quality work and Judge Dredd: Helter Skelter is no exception. I look forward to getting this game to the tabletop.

If you want more Judge Dredd: Helter Skelter content, I have a review of the game on BoLS as well as miniature breakdowns of each of the factions. I have articles looking at the Nikolai Dante’s faction and the Strontium Dogs. I also an article looking at the Slaine Mac Roth group too. Be sure to check all of this content out!

Rolling Around With My Brain in My Lap