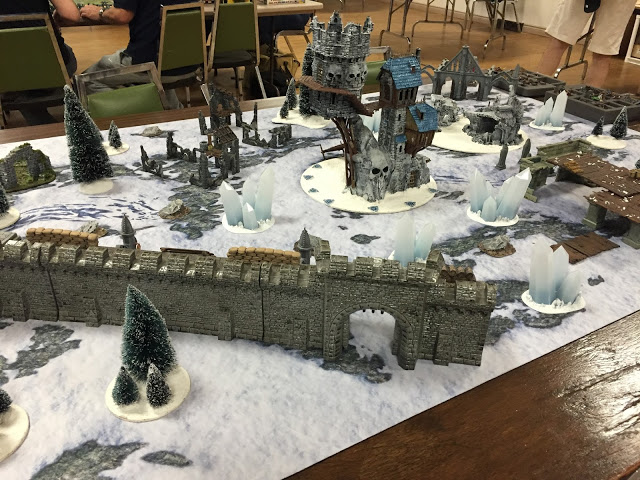 At the Lords Of the North Over The Top games day, I was able to get an enjoyable game in of Frostgrave. This table was sponsored and ran by the guys from 6 Squared Studios.

Because the game is just a demo a convention, the campaign system did not come into play. Instead, each treasure on the table was assigned a predetermined number of points and whomever carried the most points worth of treasure off the board would win.

My battle plan was similar to how I won The Lords of War Frostgrave Campaign Day. That is, to split my forces and run them in quick with Leap to capture the treasure and get out. Without the fog spell, this strategy did not work for me this time.

In turn two I leaped the guy with the three point treasure off the board. Seeing that I was winning so quickly, two out of the three warbands immediately placed their focus on me. This was not good and my Archer with the one point treasure died very quickly as a result from a bone dart.

From here on out, the guys around the table had a great time teasing me whenever it was my Wizard’s turn to activate. “It’s your turn. What you can’t go because you have no Wizard. Sorry about that, I forgot.” Oh well. I was still in the lead with points since I got the most treasure off the board.

In the end, I got second place by treasure count. I took the most casualties, but I did manage to get one three point token off the board before the game timed out. One of the other players managed to get four points off the board. The other two groups were so focused on the battle that they didn’t get the treasures off the board in time.

This was my fourth game of Frostgrave and I had a great time. It sucked that my Wizard died, but sometimes the dice are just against you. All it takes is one bad roll off. This game, it was against a lowly wild dog that took most of the hit points off of my Wizard. Then my opponent was able to take advantage and finish me off with his Apprentice’s Bone Dart. Good thing this wasn’t Charlie Company as I would have lost automatically for my main character being a casualty.  🙂

6 Squared Studios sponsored this table and they have some products that I would like to bring to my readers’ attention. When I left the world of miniatures, I was dismayed with the constant price-hikes that the big miniatures company was taking. At the time, I did not know about the little guys and other gaming companies out there so I felt “monied” right out of my hobby. I could not afford GW prices and was so happy when I went to my first Hotlead Convention and found that there are plenty of alternative games out there that cost less. As my readers know, I bought into some more affordable games at that convention and one year I noticed a new company selling bases and river tiles. That company is 6 Squared Studios. The first thing that I noticed about them was their prices. They are an amazing value for what you get. You will not have to mortgage a house to outfit a table with their products. Lately, they have got more into scatter terrain and tokens.

I would like to bring my readers attention to some of the products on the Frostgrave table by 6 Squared Studios. Specifically check out how great the products look for the price that they are asking. All of the prices are in Canadian dollars because that is where I live.

I have no idea what 6 Squared Studios charges for shipping to my international readers, but for me, their products are a great value because I buy from them direct at conventions. At the last convention I went to, I bought a number of their items and plan to do a review of those items once I have them painted.
I hope that you enjoyed this post. If you did, please check out my Facebook Page and give it a Like and feel free to add yourself to my Google Plus Followers using the tab on the right (if you are surfing by Computer or Tablet).
Suggested Stories and Ads...
Tags: Battle Report, Frostgrave, Osprey Games

How Important is Historical Accuracy… Really?