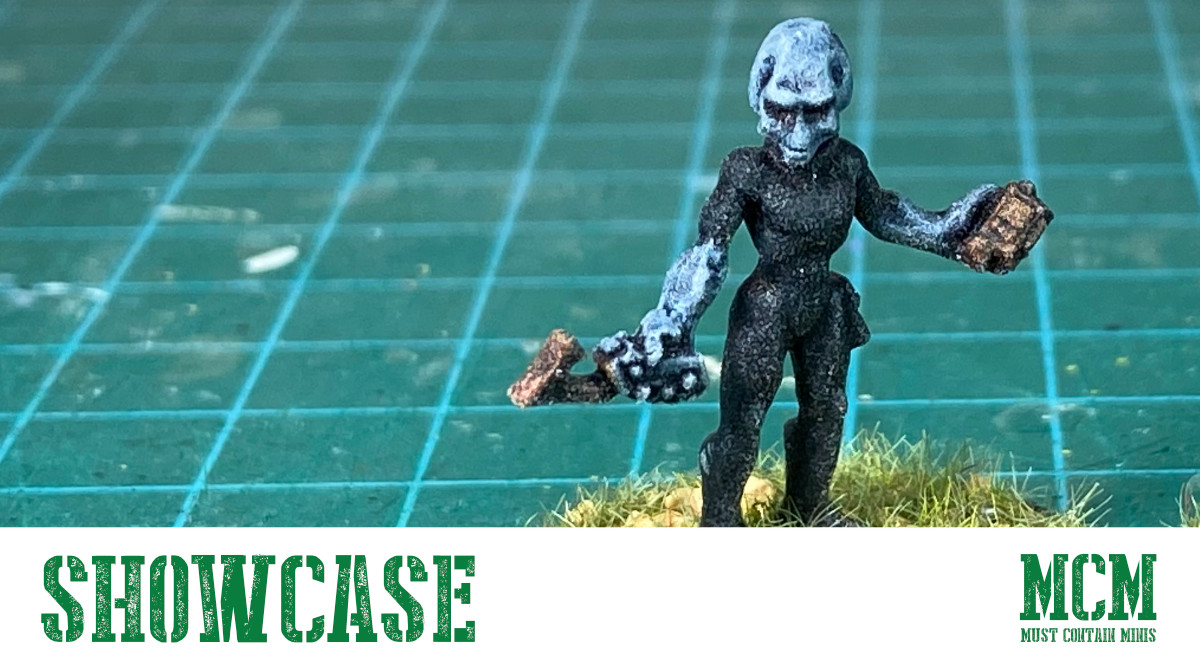 Ever thought of adding in painted Gray Aliens to your Role Playing Games or skirmish miniatures games?

In this post, I am going to show you how I painted up a pair of Gray Aliens by Reaper Miniatures. I also learned a very hard lesson while painting these miniatures. I will share that lesson with you too.

Now, let’s talk about these aliens by Reaper Miniatures.

The Gray Aliens that I painted for this post come as two humanoid aliens and some sort of space creature. The creature is still on my paint desk for another day, but you will see both the humanoid aliens completed in this post.

Reaper also made these miniatures sculpted by Bob Ridolfi available in their Bones line too. The difference between the two is the material that they are made of and their price. The third alien also happens to be different between the two packs.

As you may notice, both sets of minis are part of their Chronoscope line of miniatures.

With all that out of the way, let’s look at how I painted them.

Because I have had these miniatures for a long time, I don’t have their original bases. Instead, I used some MDF bases that I bought from a third party vendor. There will be links to them further below.

How I Painted the Miniatures

To paint these miniatures, I used just a handful of colors. To do so, I followed the steps below…

After I completed the above steps, I took the miniature out to the garage to spray varnish on it. That is where I ran into my tough lesson about painting miniatures. More on that further below.

After the spray of varnish, I finished the model off with some basing materials. I just made my own mix with items I have laying around in my collection.

Now it is time for the hard lesson. If you pay attention to the mini on the right, you might notice the issue. Let’s talk about it.

What Happens if you Varnish Miniatures in the Same Spray Box as where you Prime Miniatures?

Here is an image of the miniatures before I varnished them. The miniatures with them I painted at the same time and you will see more about them in a future post. Check these out!

If you want to see more of the other miniatures in the picture above, be sure to check out my Cerulean Clade Posse Review. These are some really nice miniatures by Warcradle Studios for Wild West Exodus. You can learn more about those aliens here.

I took these miniatures out to the garage to varnish them. After shaking up the varnish, I put them on the same platform and put them in the same cardboard box that I used to prime some other miniatures.

After I finished spraying the varnish, I noticed all of this white powder stuck to my miniatures. Looks like the aerosol from my varnish sprayed around the primer remains from the box and dusted it onto my figures and their bases.

Some of my readers let me know that the dusting could have also been caused by a reaction between humidity and the spray varnish I used. Which one caused the problem, I am not sure. I just know that I will have to be more careful the next time I go to varnish something to protect my paint job.

Here are pictures of how the turned out after the varnishing. Both theories seem plausible to me me as the dried primer was dusty in the box too.

Having a backlog of miniatures, I decided to error on “good enough.” I repainted the rims black and then applied the basing materials.

What do you think? I think they are still good enough to move on to my next project.

This post is not the first time that these miniatures appeared on Must Contain Minis. They also appeared in a post about miniatures that I found suitable for Rogue Stars. They looked pretty good back then even unpainted. Here is a picture of the alien creature that I did not paint.

If you are interested in these miniatures, be sure to check out Reaper Miniatures, or your favorite retailer to see if they carry the line.

For those wondering, the MDF Bases that I used for these figures are all by Six Squared Studios.

Now, let’s wrap this article up.

Even when I don’t have a game in mind, I find myself buying miniatures off of them when I just like the figures. That said, these miniatures can work for a wide variety of miniatures games and RPGs (Role Playing Games) too.

If you are a fan of Osprey Games like I am, you know exactly what I am talking about. Star Grave, Rogue Stars, and I am sure you could work them into other systems too. Other games that come to mind include Five Parsecs from Home and 5150: Gaea Prime First Defense.

For some reason, whenever I see miniatures like these, I think of recreating X-Com, but on the tabletop.