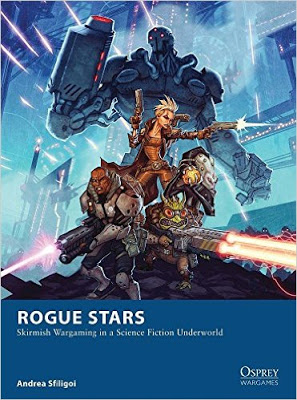 Now here is a game that I have been eagerly anticipating for a very long time. Osprey Publishing has been kind enough to send me an advance copy of Rogue Stars for the purposes of this review.

Rogue Stars is a game where players control a small “crew” of Intergalactic Travelers all working together for adventure and profit. Each crew consists of 4 to 6 figures and there is rules to play this game in either 15 or 28mm. Reading through, it is obvious that it is geared for 28mm, but it is nice that they also offered the option to run the game in 15mm. The game itself is intended for play on a 3′ by 3′ table.

What this game gives is incredible flexibility in the characters that players can bring to the table. Andrea Sfiligoi crammed a lot of information into this product. The font size in this book is much smaller than most of the other Blue Cover Osprey Wargame books that I have read and there is absolutely no fluff between the pages. In the absence of fluff, there are plenty of rules and options to create an extremely flexible sandbox environment where players can build pretty much whatever character types they can imagine.

Of course, there are some limitations to what one could reasonably build. For example, building a crew of 4 Space Marines (using you know who’s models) is not possible simply because Power Armour costs too many points for 4 suits in a standard point game. That said, there would be no issue fitting 1 to 2 Space Marines in a Crew and then using various Imperial Guard miniatures for the rest of the Crew. Ideally, one would want to spend points on non-combat abilities as well as combat abilities because there are 20 different missions set across 20 different environments. Players need to be equipped to handle all scenarios rather than being optimized for straight up combat.

Tallying through the book, there are about 23 pages of rules, 8 pages of scenarios and environments, 20 pages about creating your crew and 1 page about how to string the game along into a campaign. Some of the Internet sites out there billed this game as “Frostgrave in Space” or the “new Necromunda” while building hype, so I was very surprised to see just one page about building campaigns. That said, I am sure that these campaign rules will work well enough and I do like that it uses a points-buy system. One thing that I always hated about Necromunda was that what abilities a gang member gained or what weapons they could find between battles was random. Rogue Stars, on the other hand, truly allows players to design and play whatever characters they can imagine.

The other game that I have played by Andrea Sfiligoi is A Fistful of Kung Fu published by Osprey Games and I have heard a lot about Andrea’s Song of Blades and Heroes System. For a while, I was thinking that Rogue Stars might be an adaptation of that system. It is, but it is much-much more complex. Veterans of the other games will recognize strong similarities in that they use the same back-bone of a system, but there are also plenty of differences.

The first change is the dice. This game operates on d20s, not d6s. This game also introduces the idea of Critical Successes (roll a 20) and Critical Failures (roll a 1). Like A Fistful of Kung Fu, activations are rolled against a target number. You can choose up to three dice and for every success, you get an action. For every failure, your opponent gets a reaction. To switch turns of who has the “initiative” the other player can try to “Take the Initiative” when either certain requirements are met or by spending a reaction. When trying to take the initiative, a Leadership roll with modifications is made against a target number. If that number is met or exceed, then the initiative changes.

Jumping to combat, combat is done by rolling a modified dice roll versus a target number of 10. This is done for both melee and ranged attacks. If the attack hits, the degree of success determines where on the body the target hits and the targets rolls a die and applies modifiers to determine the result. Yes readers, body parts are target-able and called shots may be made. Want to focus all of your might onto the target’s head, you can do that. Likewise, a player can try to cripple their opponent by aiming for the arms or legs. If enough damage is rolled, a limb can even be severed from the body.

If a character goes Out of Action (OOA), every miniature in that crew needs to make a Morale check. If that roll is failed, they take a pin and stress. If they roll a Critical failure, that character has a 50/50 chance to either surrender (dropping all weapons and allowing themselves to be captured by any enemies within 4″) or attempt to run off the board. The winner of each game is actually determined by mission objectives and not necessarily who is standing on the table last.

The missions themselves are fairly interesting. There is a total of 20 of them and the idea is that players would randomly determine which mission to play when they come to the table. That way, there is no real min-maxing to best fill a mission. 20 missions gives a lot of variety. Below is an image of one of the missions page. Note how small the text is. This book packs a ton of content into its 64 pages. Missions can vary from getting to an object and completing a special role to killing an enemy’s crew. Not only is there a mission table, but there is also a location table and a complications table each with 20 entries. After rolling on the mission table, roll on the Location table to determine where the mission takes place and them roll on the complications table to determine if there are any interesting conditions to consider. Using the fundamental counting principle, these three tables gives us a total of 8,000 different gaming scenarios to play (20*20*20=8,000). To account for all of these possibilities, players need to make a balanced crew with a variety of skills and abilities.

Having read through the book, it is in the character creation that this game really seems to shine. At the very start of crew creation, the player must decide what theme to run with. The themes determine which skills, abilities and equipment a character can start with. Themes here include Bounty Hunters, Cultists, Cyborgs, Mercenaries, Merchants, Militias, Miners, Pirates, Psionics, and Star Cops. After a theme is chosen, players may choose one tactical discipline for their crew. There are 19 traits and which ever one is chosen gives all figures (ranked above civilian or green) a buff of some sort.

Using these themes offers so much variety to the gamer in what can be designed.

I have already chosen out my first models and I can’t wait to get them to the table. One is a group of Space Cultists from a large miniatures company that I plan to use as Pirates and the other is a group of miscellaneous miniatures that I plan to use as a Merchants crew. For those interested, North Star Military Figures has an official line of miniatures for this game.
Once the figures are chosen, character creation is a matter of assigning abilities and equipment to characters. Both cost points and are restricted by the crew’s theme. Experience is awarded (XP) through missions and players can upgrade their characters between missions using that XP. New skills and equipment are limited by the player’s theme, unless items were found during the adventure and then those items can be equipped by paying the XP (even-though the character would normally not be able to take those options).

This pretty much completes the overview of the book.

I like what this book offers. It provides the reader with an extremely flexible game system pitting small crews of intergalactic crews against each other. There is no Fluff to get in the way of the rules, but players can easily make their own stories through the play of this game. Although I really enjoyed the read, I do have some criticisms of the book.

The biggest issue that this book may suffer is whether it meets the expectations of the readers. There is certainly an interesting game here, but some of the pre-release Internet Hype has classified this game as “Frostgrave in Space” and a Spiritual Successor to Necromunda. This game is neither of those things. Rogue Stars comes across as much more complex than Frostgrave, and just different in scope and theme to Necromunda. There is an experience system, but it is not two tiered (using experience and gold) like it is in either of the previously mentioned games. While some of the pre-release hype may have missed the mark, the Facebook Fan Page has been doing a good job of presenting leaks and setting expectations.

Another thing that I noticed is that there are a few errors and omissions within the book. With the size of this book, that is bound to happen and Andrea Sfiligoi has been very good about mentioning the mistakes on the The Rogue Stars Facebook Fan Page and I am sure that Osprey will eventually release an errata or FAQ for this game. I would also like to see a quick reference pdf for easy referral to summary rules without flipping through the book.

Below is a quick summary of the good, the bad and my final thoughts on the book.

For $25 Canadian (11.99 UK Pounds or $19 American), this is a fun book with a lot of value. I love how much flexibility it gives to players in character and “crew” creation. Some of the rumours floating around the web before the game’s release were wrong, but there is certainly an interesting product here. What I like the best about the game is that it offers a massive sandbox to build the type of characters that I would like to play in a small crew of 4 to 6 Intergalactic Travelers. Personally, I enjoyed the read and am looking forward to getting it on the table.

Thank you again Osprey Games for sending this book.