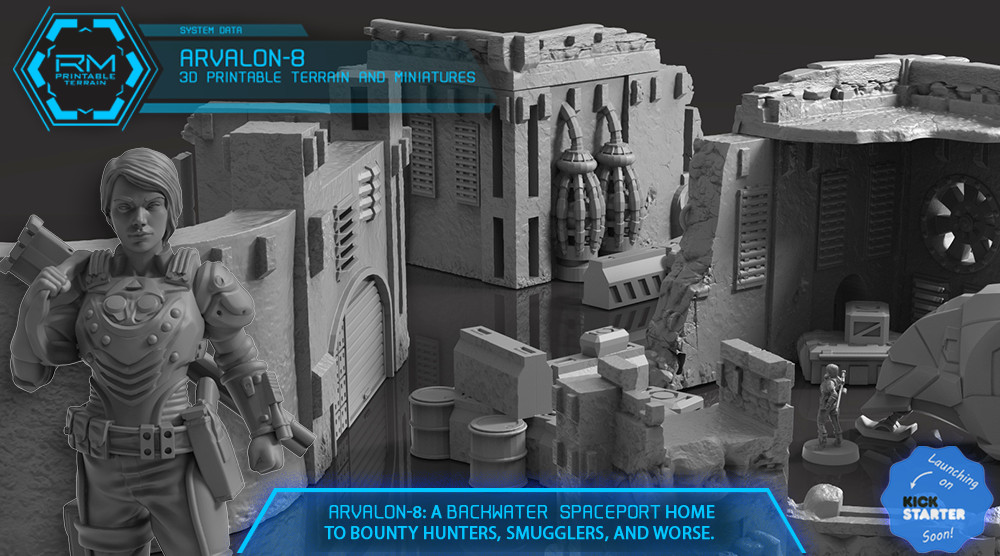 When I see something neat, I like to draw attention to it. In this post, we take a quick look at an upcoming Kickstarter Campaign. In this campaign, RM Printable Terrain brings their latest 3D printable terrain called “Arvalon 8” out for some crowdfunding support. Much of this collection, RM Printable Terrain already completed. Some of it is still in development. This post is an Arvalon 8 Kickstarter Preview.

Now, this campaign is soon to launch. You can sign up for a Kickstarter notification for when they go live.

To learn more, I talked to the creator and he sent me some preview pictures along with a good deal of discussion back and forth. The theme of this terrain set is Sci-Fi, specifically for desert planets. We are talking space rugged terrain, space ships and even space bounty hunting miniatures. This looks exciting to me. Now, let’s take a closer look!

Marc, the man behind RM Printable Terrain, sent me the pictures in this article. These images are mostly to do with Warhammer 40K, but really, you could use this terrain for any Sci-Fi game. I could see these items working well for Star Wars Legion and a number of other settings too.

The pieces themselves are scaled to Warhammer, but, being 3D printer terrain, you can upscale and under-scale them as you want to make them good for any scale of gaming.

Overall, some really neat terrain options if you are looking to outfit a desert table for a sci-fi game. These pieces are just the beginning though. Marc let me know that they have many more pieces planned as stretch goals. I saw a preview image of one item, but I am not going to share that at this time.

Wait a minute, didn’t I mention space ships off the top of this Arvalon 8 Kickstarter Preview article? I sure did! They are here too. I managed to find a couple of preview pictures of them, but they are still in development. So far, I have seen 2 of the ships, but I hear there are 9 more depending on if the Kickstarter stretch goals get unlocked. Below are some pictures of the ships that I have seen so far. Please note that the images below are of a quick prototype model. This may not be the final product and it may have been quickly printed as a demo.

I am not sure about you, but I really like the look of these two ships – especially the first troop carrier. In my mind, I am already imaging a gaming tabletop with these ships scattered around as the deployment areas for the troops on the battlefield. I totally want to see that sometime. I think this sort of deployment would make for an exciting narrative miniatures game.

Marc also plans to develop a number of miniatures related to the Arvalon 8 theme. These miniatures will be Space Bounty Hunters and depending on how the unlocks go, there could be up to 40 of them.

Right now, you can pick up the STL file for the mini below for free from RM Printable Terrain. This is a printable miniature with more to come. Just looking at the render and I am already thinking about how she might be used in Zona Alpha, Fallout or Rogue Stars. The minis are meant for RPGs (Role Playing Games), but can you think of other games you might use these figures and ships for? Please let me know in the comments below.

3D Printing is yet another hobby that I want to get into. As you can see from this Arvalon 8 Kickstarter Preview, 3D printing has a lot of uses for miniature wargaming. At this time, I have been gathering STL files and conducting research on what is involved.

A friend of mine bought a Creality CR-10 and told me that the he has already saved the price of the printer just off of the terrain pieces that he printed off for himself and his friends. Very nice! Makes me want to be that guy.

Hopefully you enjoyed this Arvalon 8 Kickstarter Preview article. My main goal was to provide awareness of this neat looking kickstarter.

It should go live in early June, and I am most excited to see the development of the Arvalon 8 ships. I always wanted to recreate an old-school XCom type game on the tabletop. I wonder if I might be able to do that with some of RM Printable Terrain’s upcoming models.

Special thanks goes over to RM Printable Terrain for sending me these images to share with you in this post. This Kickstarter project looks interesting, and I am looking forward to seeing how the campaign progresses.

If you already have a 3D printer, don’t forget to pick up the free sample files.