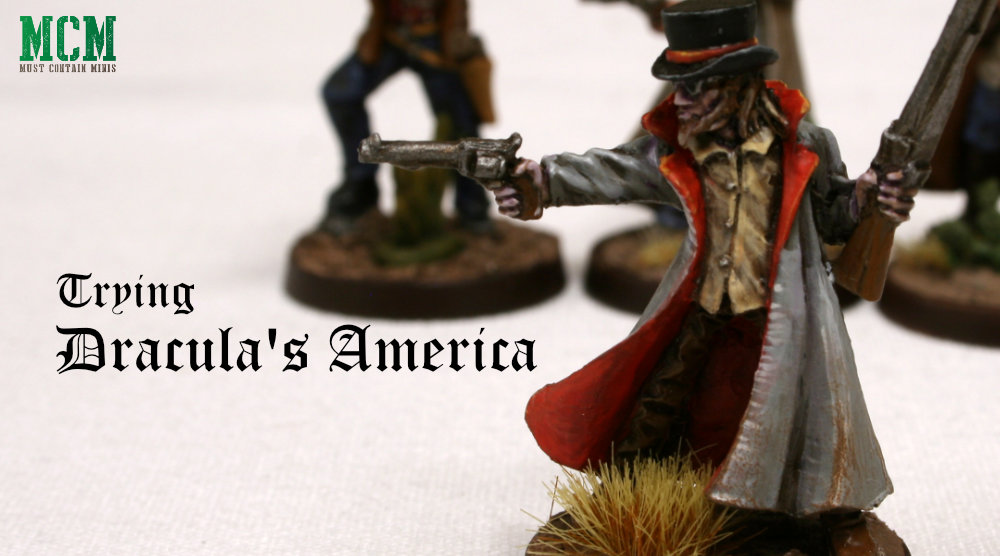 At Sword and Brush 2019, I gave Dracula’s America a try for my first time. Personally, I always liked the look of Dracula’s America, but have not had the opportunity to play. I read through all three books and it is really nice to give the game a try at the table. Les of Underground Painter’s Desk ran this excellent participation game at Sword and Brush. In this post, I discuss the narrative that unfolded in the game I played and give a quick review of the rule set in use.

Dracula’s America is nothing new to Must Contain Minis. I read through the rule book and the two expansions. My favourite of the expansions was Forbidden Power because it adds in Cthulhu type elements. Meanwhile, Underground Painter’s Desk tells me the best expansion is Hunting Grounds because of the rules it adds and some changes he felt helps balance the game.

For those that don’t know about the game, the Civil War ended and Abe Lincoln has been assassinated. This alternative history game by Osprey Games takes a turn into the weird from there. Dracula seats himself as President for Life of America. The Game itself is Miniatures Agnostic so you can use whatever figures you want. There are official figures for the game, but Les used mostly models by Black Scorpion Miniatures.

Les set up an excellent table with well painted miniatures for his demo game of Dracula’s America. I will mention that if you like his work, Underground Painter’s Desk does do commission work.

Now, let’s take a look at the table he brought to the convention. As a note, all of the miniatures, terrain and buildings on this table were painted by Les. Nice work!

Four Factions came to play on this table. I played as The Red Hand Coven. One of my opponents played as The Skinwalker Tribes and the other played as The Twilight Order. The fourth order did not make it to the table and that is The Crossroads Cult. Our fourth player was missing in action so we went without the Forsaken. For more information on three of the different factions, check out the Faction’s Blog Post at Osprey Games. The fourth (The Forsaken) is actually from the expansion Hunting Grounds. You can find more information about them over on this post.

The Red Hand Coven (my group) was tasked to search four buildings to find a greater Vampiric Demon. That creature could be in the Church, the Watertower, the Marshall’s Office or the Store. My group got bonus points for searching each location and extra points if we found the Demon.

The Twilight Order was to stop my group. They got extra points for each character in my warband that they killed. That put an instant target on my group and leaders.

The Skinwalker tribes were simply to make it straight across the map from one side to the other. They would get extra points for each character they got safely off the map.

Meanwhile, the Forsaken were to put a stop to the Skinwalkers. They would get extra points for each Skinwalker they killed.

All players got points for kills too. There were also some human NPCs that would run from the Vampires of the Red Hand Coven and Shape-Changers of the Skinwalkers. They didn’t have any real effect, but Vampires could use them to recover damage and any faction could use them as meat-shields to absorb bullets. Not a very nice thing to do.

Although the game suggests that deployment zones go corner to corner, Les modified the deployment zone to the middle of each board side. He finds this puts the players into the action faster. I deployed on the closest edge of the table (see image below). The Twilight Order deployed directly across from me. The Skinwalkers deployed on the right side and The Forsaken were to deploy on the left side of the table. Being that there was no Forsaken Player, Les decided that they would enter the field as NPCs he controlled at the top of turn 7.

All of the objectives were known to the players at the table from the start. While no one was directly opposed to the Skinwalkers, we all knew it was in our interest to not let them cross the map.

The Red Hand Coven deployed their models as per the picture above. My plan was to explore the close objectives with the two models on the right hand side while making a push to the objectives at the far end of the table with the four models on the left of the church.

I did not plan for the Skinwalkers to engage my forces, or for the disaster coming in the church.

I missed the memo that Vampires do not enter churches. I am too used to modern shows where demons have no troubles entering houses of God. Boy, was I in for trouble!!!

A priest blew the head off of my Thrall that entered the church. He then went to the door of the building and went on what is akin to “overwatch.” My characters would avoid his line of site from that point forward. No point in suffering more loses from a priest armed with a shotgun!

That route would be right through my forces. Now I am watching out for The Twilight Order, A Preacher with a Shot Gun and the Skinwalkers. Things are not looking good for Dracula’s America Red Hand Coven. To make it even worse, my dice rolls were terrible during this game!!!

At this point, I have just three Miniatures left and am acting sluggishly with just two command cards left to work with. I knew my time was near.

The civilians had enough and were getting out of here! Sadly for the citizens, they were running right into the hands of a blood thirsty Vampire Demon. That’s right. I completed my objective with my leader and found the beast!!!

Unfortunately for me, I took so many loses, I had to take a moral (grit) check. My leader failed the roll and the three guys I had left exited the table.

My summoned Demon actually did not last long on the table at all. The Twilight Order took him out the very next turn with a very lucky shot. They collected a good number of points too for taking out a demon.

The other two factions continued to battle it out to the end.

In this game, The Twilight Order came out on top for points. They accumulated their points through the kills of demons and enemies alike. The Skinwalkers did not get that many characters across the field. They put up a better fight than the Red Hand Coven, but it wasn’t enough. Congratulations goes out to The Twilight Order for winning the game!

Rules of Note in Dracula’s America

Overall, Dracula’s America was a simple yet fun game. It runs on three different types of dice (d6s, d8s, and d10s). Your highest level characters use d10s, with the second in command using d8s and your lower rank soldiers using d6s. You use these dice to complete test rolls against target numbers. For each action, you get to roll a number of dice. You count for success that are at or above the target number.

For example, if you have a target number of 5 and you roll three dice, you need to roll five or higher to pass. Each die that passes counts as one success. As you can guess, it is easier to roll this on a d10 than a d6. Saving throws are based off of a die roll versus a target number, but that number changes depending on how many success your opponent hit you with.

During the Draw phase, you draw one card for every miniature you have plus an extra one if your leader is still alive. As you lose characters, the number of cards you get decreases each turn. During the action phase, you play your cards against your opponents. Black Cards beat red cards and if there is a tie in colour, then you look at the number on the card. Highest card (or colour) acts first. If both players play the same card, a random event happens. Each card gives you two actions. You can use them both for one character or split the two of them between two characters.

The NPC Phase and Recovery phase I am going to skip over, but they are what you would expect.

Below are pictures of the leaders of my group.

Hopefully you enjoyed this Battle Report along with a short review of the game. Overall, I had a lot of fun and it is a game that I wanted to try for a while.

I almost forgot to mention that the game comes with a campaign system where you progress through the game an learn new skills and abilities as you go.

Special thanks goes out to Les of Underground Painter’s Desk for running this event. There are some great miniatures here and he does do commission work too. Also, if you haven’t checked out Osprey Games before, check them out. They are publishing great games of pretty much every genre. If you like miniatures, they likely have rules that will fit the collections you already have.

If you liked this article, please check out my post showcasing the miniatures in this game (nice and close) and my review of the game over on Bell of Lost Souls.

Finally, be sure to check out my Wrap Up Article gathering together every single Sword and Brush 2019 article that I wrote.