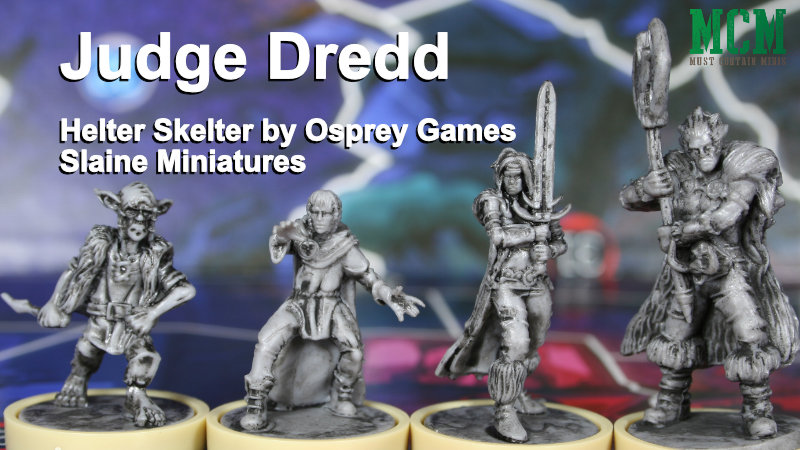 In this post, we look at the Slaine miniatures in the Osprey Games‘ Judge Dredd: Helter Skelter the board game. This is a continuation to the post I did earlier looking at the Judge miniatures of the game. Now, let’s take a closer look at Slaine and his family.

As a note, I did not apply any dip or treatment to these miniatures. This is how they come out of the box. Osprey Games already pre-washed them some they look nice right from the start. Makes for a very nice looking board game.

In the interest of full disclosure, Osprey Games sent me a copy of the Judge Dredd: Helter Skelter Board Game for review purposes. It is a lot of fun and I have a review of the game over on Bell of Lost Souls.

Okay, straight up, I know nothing about the Slaine Mac Roth group from Judge Dredd. Fortunately there is a very short write up in the Osprey Games rule book. This group is the smallest of the factions in Judge Dredd: Helter Skelter. This group contains just four members instead of the full five of the other gangs. Below is a picture of the group.

As a group, this family fights strong. They are the best in melee combat and are extremely fierce. Speaking of fierce, Slaine even transforms as his wounds and kill count go up.

All gangs in this boxed set come with five figures. The Slaine family is just the same. This group comes with five miniatures, but only four are on the board at a time. The fifth figure of the group is a berserk version of Slaine. As Slaine takes damage and scores kills, he gets closer and closer to transforming into his berserk mode. When he reaches the threshold, you replace his miniature with a different one.

They named that berserk version of Slaine as Warp-Slaine.

As Warp-Slaine, he hits enemies twice as hard in melee combat, but also loses his ability to block melee attacks.

In his normal form, Slaine uses his giant axe to destroy his enemies.

As a character, Slaine excels in close combat and has a decent amount of armour against ranged attacks. He has 5 hit points. That is very good!

Once Slaine’s kills match or exceed his hit points, he turns into Warp-Slaine for the rest of the game. The difference between the two is the miniature and the fact that Warp-Slaine’s attacks hit harder, but he loses his ability to block incoming melee attacks.

Niamh is Slaine’s wife. She is just as good in battle as Slaine and even a little better at taking cover from ranged attacks. She does not transform into a more powerful figure, and she has one hit point less than her husband.

I consider Slaine’s son Kai a Wizard. In the instruction book, though, it says that he is “trained in the druidic arts,” so I guess he is a druid.

Regardless, he is the only one in the whole family with ranged attacks. He can heal his allies, attack ranged opponents and even cause explosions in adjacent spaces. He is not a fighter, but his group does have 6 open melee cards. This means that even though he has no melee cards of his own, he can still end up surprising his enemies and being good in hand-to-hand combat.

Ukko is very sneaky. This character holds two location cards (instead of one) at the start of the game and can choose which one to deploy from during the game. This gives flexibility in where he starts on the game board. To me, he looks like a Goblin, but apparently, he is a Dwarf. He is great at hand-to-hand combat and at taking cover from ranged weapons.

While these miniatures come from a board game, I figured a scale comparison would not hurt. Below I paired up a couple of Slaine group miniatures against a 28mm Bolt Action miniature.

I hope that you enjoyed this post. The game is really good and the miniatures are pretty cool too.

Osprey Games pre-washed these miniatures to make them look better than just plastic figures. The miniatures pictured above look like this right out of the Judge Dredd: Helter Skelter board game. I applied no washes or inks for them to take on the appearance they have.

As far as gangs go in the board game, this is a good one to play. They hit hard and the characters have more cards specific to them than characters in other gangs. They are great at melee and protection but seriously lack in long-range firepower. The only character in their whole group with long range attacks happens to be Kai.

While I wasn’t sure about this group when I opened the box. Now that I have played a number of games, I can tell you this is an interesting group to add to the game.

If you want more Judge Dredd: Helter Skelter content, I have a review of the game on BoLS as well as miniature breakdowns of each of the factions. I have articles looking at the Nikolai Dante’s faction and the Strontium Dogs. I also an article looking at the Judges group too. Be sure to check all of this content out!

Age of Conan: The Strategy Board Game