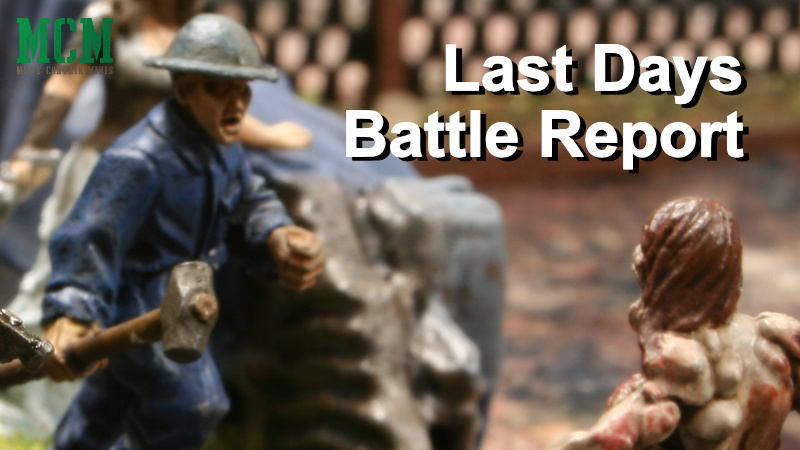 One of the things that I love is trying out different games with the miniatures I already have. As a result, Osprey Games has been a perfect fit for this site. They have plenty of Miniatures Agnostic (use whatever miniatures you want) games to choose from. Many, I have covered on this very site. With that out of the way, let me introduce you to my Last Days: Zombie Apocalypse Battle Report.

Before selecting a mission, we built our groups of survivors. I took a selfless leader with a group of 7 members (for a total of 8 survivors). My opponent Randall took a trained leader with an elite team of 4 people (for a total of 5 bodies on the field). This means that I had my opponent outnumbered, but they had me out gunned. In fact, many of my survivors didn’t even take firearms with them. I armed many of them with wrenches and clubs on purpose. More on that later.

As a note, I had one survivor without a weapon. That is not allowed in the rules – everyone has to be armed in some way. We made a mistake, but we still had fun.

Now, let’s get right into the Last Days Battle Report.

We rolled up the scavenging mission. In this mission, the object is to collect more scavenging tokens than your opponent. It is very much like the treasure collection objective in many Frostgrave scenarios. This is actually the scenario that the book suggests you play for your first battle. We were happy with this selection.

Perhaps a Little Too Confident

When the Group Becomes One

Acting in the interest of the group, everyone on my side steps to the plate. They act as a well formed team instead of as a collective of individuals. Any differences they may have had, they put aside to make sure they all come out alive.

Back to the Other Side of the Table

The Elites are doing well at killing zombies, but have attracted a large number of more zombies due to the noise of their weapons.

Walking off with the First Token

While my opponent still has not yet reached their first scavenger token, my group already picked up their first one and are sending it off the board.

At this point, I was very nervous. I feared that my opponent would try to take a few shots at my survivors. That said, the other side found themselves too busy dealing with zombies to attack me.

In the end, my side collected more scavenged treasure than my opponent (2 to 1). This means that my side won and would be better equipped for our next engagement.

Thoughts About the Game

I read through Last Days: Zombie Apocalypse sometime ago and reviewed the game last August. This Last Days Battle Report was the first time that I played the game with Randal and Dave and I had a lot of fun. Randal played as my opponent while Dave helped with the rules.

I will say though that this game plays just like Carniverse. They use the same gaming engine, but one focuses on dinosaurs while the other on zombies as the environmental danger. Knowing that, I decided to arm much of my group with melee weapons to attract fewer zombies. That strategy paid off as Randal found that the more he fired his advanced weaponry at the zombies, the more the zombies swarmed his forces. He held them off well, but dealing with the zombies made his side less capable at collecting scavenger tokens.

Personally, I found it very interesting that neither side engaged the other. In essence, we played two simultaneous solo skirmish games on the same table. Regardless, we both enjoyed the match and did our best to do better than the other.

Hopefully you enjoyed this Last Days Battle Report. We had a lot of fun playing the game and the table looked great.

As I mentioned at the top of the article, one of the beauties of this game (and most by Osprey Games) is that you can use whatever miniatures you want. In this game, I used miniatures by Warlord Games, RAFM, and Tally-Ho Games for my group of survivors. My opponent used minis by Reaper Miniatures. For those wondering, all of the zombies in this report were from Zombicide.

As for the terrain, we used a mat by Cigar Box Battle, a building by PlastCraft Games, and those awesome fences are by Six Squared Studios.

Please feel free to let me know what you thought of this battle report in the comments below.

Most Visited Posts of the First 500