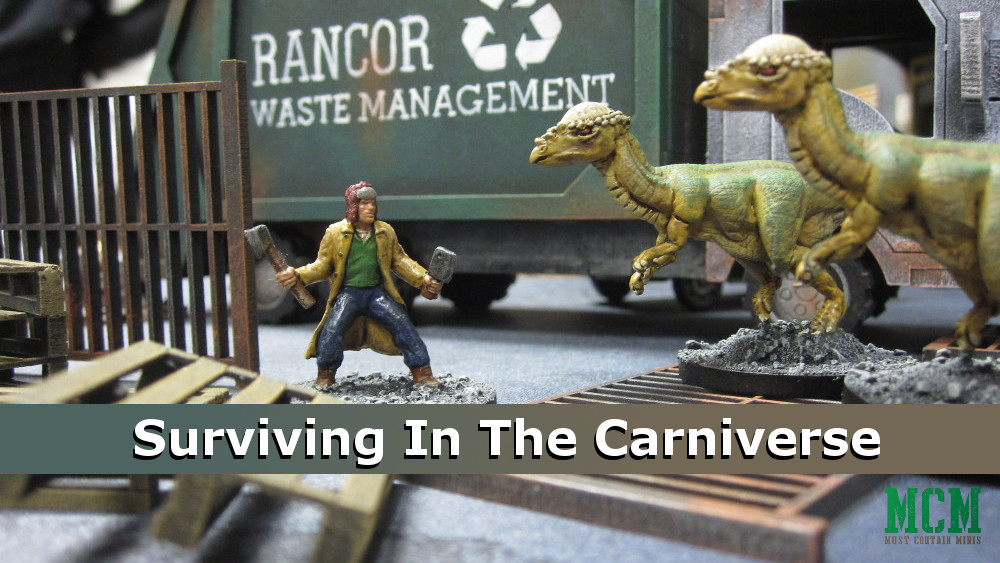 Lately I have been writing about a cool Kickstarter called The Carniverse. You may have seen my article introducing the campaign or my interview with the game’s creator. In both those articles, I mentioned that I found the game a lot of fun. How do I know the game is a lot of fun? I gave it a try at an event back in May.

In this post, I describe the first narrative battle I had in The Carniverse.

As I played the game as a demo, the rules may be slightly different than the final version of the Kickstarter. As such, I will do my best to focus on the narrative and strategies that developed through the game rather than the exact rules and terms of the game.

Now, let’s get on to the Battle Report.

The Battle Report – Setting the Scene

At Broadsword 8 in Hamilton Ontario, Nick Wilkins hosted a demo of his brand new game The Carniverse. In this battle, players each controlled one set of survivors. I chose my set, and my opponent chose the other. Our goal was to search for and collect the treasures on the board. Whomever takes off with the most treasures and survivors is the winner.

With this in mind, we deployed. I had all my characters on the near side of the board in hidden positions. My opponent, on the opposite side of the board, took a more daring and stronger approach.

Stealth versus Overt Operations

My opponent moved his characters towards the nearest treasure markers and placed three of his models on overwatch. Meanwhile, I moved my characters very slowly into place. I did not want to attract the attention of any dinosaurs.

Seeing that my opponent was now closest to the small dinosaurs, I picked up the pace on my own soldiers. With the little dinosaur locked into combat with my opponent, I knew that any new Compsognathus would go after my opponent instead of me! I could move with confidence.

I ran two of my characters to the closest treasures.

I also collected the treasure out of the back of the garbage truck. By this point, I have three characters working on exiting the board with newly collected items. Meanwhile, my opponent continues to be busy with the dinosaurs and finally searches his first dead body.

Since Carniverse is meant to be a game of survival, I walked some of my guys off the board. Three of them had treasures. To add pressure to my opponent, I moved two of my guys in a pincer maneuver and started firing on my opponent’s model in the middle of the board.

At this point, Barnaby, the Event Organizer came over to help my opponent with his strategy.

As such, my opponent had the last miniatures on the field, but my side won the battle because we managed to carry more treasure off the board, and keep more of the survivors alive, than my opponent.

Overall, I had a lot of fun with Carniverse. I am really looking forward to seeing the final rules. For those interested, this game is on Kickstarter until August 29 (2019). It ends at 7:25am (EDT) on the 29th.

The rules presented at the demo were simple and easy to follow. I love the promise of the campaign rules and I don’t think you can go wrong if you add dinosaurs to a miniatures game. 🙂

In our battle, the stronger dinosaurs did not make it to the table. That said, the little guys did really well at keeping my opponent occupied while I took off with the treasures.

In this game of survival, the dinosaurs are much more than just a nuisance. In fact, they might even be more powerful than your enemy’s party.