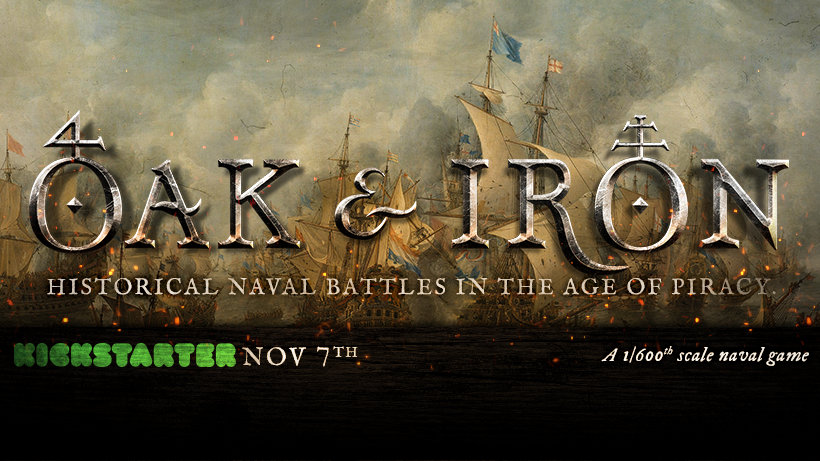 It is a great time to be a gamer. There are so many interesting upcoming releases and Kickstarter projects. Among the many potential projects that has captured my eye is Oak & Iron. This post is our second about the new game by Firelock Games. The biggest news since our first preview post is that the guys set the Kickstarter date for this project to November 7th, 2018.

In preparation for the Kickstarter Release, Firelock Games has started leaking out information about this 1/600th scale naval miniatures game set in the age of piracy. I actually had the pleasure of releasing one of the preview pictures yesterday as an exclusive over on Bell of Lost Souls. That image is a rendering of a 5th Rate Ship for the game. The other images sent to me by Firelock Games are in this post. We will keep the 5th Rank Ship exclusive to Bell of Lost Souls. 🙂

Aside from some images of the game, I want to share a video by Beasts of War (OnTableTop). They actually got to try the new game with the designer, Mike Tunez. Below is that video embedded from Youtube.

Aside from the picture of the 5th Rate Ship, my contact at Firelock Games sent along a few more images.

Oak & Iron is a 1/600th scale naval game set in the age of piracy, imperial expansion, and above all, fighting sail. It allows players to recreate battles between small fleets and squadrons of armed sailing ships. The game is designed to be simple and intuitive while also challenging players by providing significant tactical depth, being true to the theme and tactics of the period, and supplying significant flavor for the various factions represented in the game.

If you are interested in keeping up to date with the developments and news for this game, Firelock Games has set up a page were you can sign up for their game related newsletter.

Hopefully you enjoyed this quick Kickstarter Preview article. I will say that I am a fan of Blood and Plunder, and I am really looking forward to seeing Oak & Iron develop into a cool game!!!

Remember, if you like the content that you see on Must Contain Minis, you can help support us and cover our costs. I don’t have any patreon accounts or places for you to donate, but I do have affiliate sales connections to DriveThruRPG, The Wargame Vault, and Amazon. If you buy from any of them after going there using one of the links on this site, about 5% of that purchase goes to supporting this website. The best part is that you don’t even have to buy the product you click on. Just going there from here helps us out if you buy something.

The Wargame Vault in particular has PDFs of Blood & Plunder and its expansion, No Peace Beyond the Line. Or you can get the physical versions of the rules through Amazon.