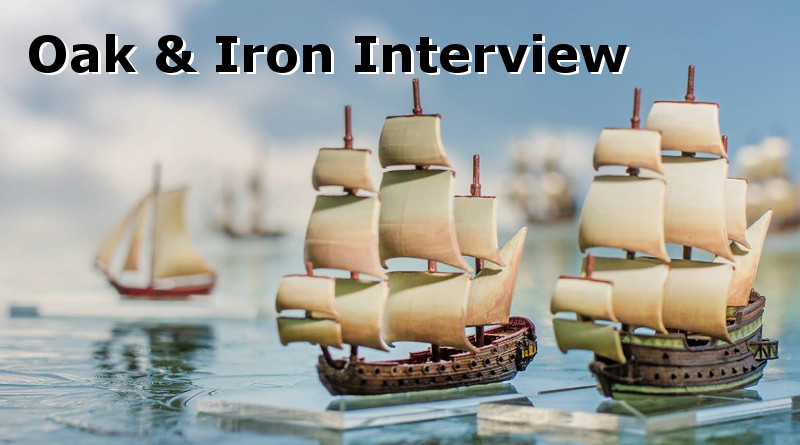 Oak & Iron continues to sail incredibly well on Kickstarter. This week, I had the pleasure to discuss through email the new Oak & Iron Kickstarter with Mike Tunez of Firelock Games. This article is a post of that Interview.

For those not yet familiar with Oak & Iron, it is a naval combat game set in the age of pirates. Firelock Games set the scale of these miniatures to 1/600, and it looks very exciting.

All pictures in this post are from Firelock Games and used with their permission.

Below I posted the email interview between myself (Jacob Stauttener) and Mike Tunez. Mike designed the rules of the games Oak & Iron and Blood & Plunder. Most of the content is straight out of the email, but I added pictures and section titles to break up the content a bit for better readability.

What gave you the idea to start Oak & Iron?

This is a type of game I’ve always wanted to get into. Similar to Blood and Plunder, I realized there was a desire for squadron/fleet level set of rules and nothing out there was really scratching the itch for myself and lots of other people I have talked to so I decided to give it a go!

A few reasons. Most prominently, it works well for smaller ships such as sloops and brigantines and adds a lot of presence and perspective to the massive size of the ships on the line especially. It’s also a good size to capture lots of detail for painting without having to exaggerate details too while also not being too big so that moving a large group of ships around wouldn’t take too much space.

How many points is a “standard” game, and what size of table do you play on?

How many points are in the core boxed set?

You can get a 100 point squadron out of all of the ships in the box.

How Do You Determine Victory?

Your Kickstarter Page discusses how victory is determined by strike points. When a Fleet has more strike points than remaining ships, it will sail away to cut its loses. Can you discuss what strike points are and how they are achieved? Will players want larger fleets because of this rule?

Sure! There are three primary ways to get strike points, when your ships become distressed, when your ships are captured, and when your ships become disabled. A ship becomes distressed when it receives (usually) 5-10 points of damage. Ships become disabled when they suffer critical damage while distressed and a ship is captured when it is crew becomes shaken and it either boarded or unsupported by friendly ships. Constructing a fleet will always be a balance between tough, hard hitting ships and numbers and somewhere in the middle is usually your best best. A first rate ship of the line can be squeezed into a 100 point game, but will probably be outmaneuvered and overwhelmed by a balanced list made up of mostly rated frigates.

Tell Us More about the Number of Ships

How many ships would be in a typical Oak and Iron Fleet?

It depends on the type of gaming your playing, but I think 4-6 is what an average game will consist of.

The image of the core box shows 2 to 6 players. Would 6 players be a possibility using only what is in the core box?

Not really, but the rules for doing so are in there and we will be sure to make that clear on the final box. When playing with multiple players, each player controls their own squadron of at least two ships.

I am thinking this might make for a fun participation game at conventions if it can bring 6 players to the table.

Definitely! You can probably do double that number if you have a big table with really big squadrons where each one is shared by two players.

How about Campaign Games?

Can you talk more about the linked Blood and Plunder and Oak and Iron Game Play? It looks like you plan to link the games together in two separate ways for those interested. Can you discuss more about that?

Sure! The easiest, ad what I suspect will be the most common way to link games together is through linked games. Linked games work by the outcome of one game effecting the start of another. For example, say you play an amphibious Escape! Scenario in Blood & Plunder and successfully get your ship off the table. You can then link the results of that game to a game of Oak & Iron where now a squadron of enemy ships is moving in to capture the escaped ship while a friendly squadron moves in to protect it. The second way is side by side games. Ships in Oak & Iron will be able to give fire support and land troops in Blood and Plunder games.

Will there be campaign rules for Oak and Iron?

Not in the box, but there will definitely be an expansion for that post Kickstarter.

Do you have plans for fortresses or coastal defences in the game?

Will the setting of Oak & Iron remain in the Caribbean (like Blood & Plunder)?

Partly. Oak & Iron expands the scope to all of the Caribbean. As we expand the game, we will be moving into other regions as well such as the Mediterranean. the Baltic and the Indian Ocean just to name a few. We definitely have long term plans to support this just like we do with Blood & Plunder for years to come.

Tell Us More about the Starter Set

How much play is in just the starter box? Is it like other games where it is just a sample of the core rules and you have to buy more to have a meaningful game?

You can definitely have a very meaningful games with white a lot of deployability right out of the box. The box is designed to give you two 50 point squadrons which can be used in many different combinations. Since the ships are not unique to specific factions, you can play them  with any of the five factions we are launching with. Each of those factions adds a significant amount of variety to the way the ships are played and the scenario builder that is also included will give you quite a lot of variety so that every game feels different.

What kind of missions do you plan to include in the game?

Right now we have missions like escort, blockade, raid, troop landing, and of course strait battles just to name a few.

I can’t wait for people to start playing! I’m really excited by the deep tactical challenge the game gives players all while using a very basic and easy to learn ruleset that really gives you a good impression of the limitations and difficulties present in not only sailing and fighting individual warships, but also (and especially!) gives a good impression of the difficulty in effectively coordinating and fighting effectively with large groups of them.

Hopefully you enjoyed this interview with Mike Tunez. Oak & Iron continues to do extremely well on Kickstarter and I am excited to see where this game goes.

Thanks again Mike for taking time out of your busy schedule to conduct this interview with me. Special thanks also goes to Alex of Firelock Games for providing us with these excellent preview images!