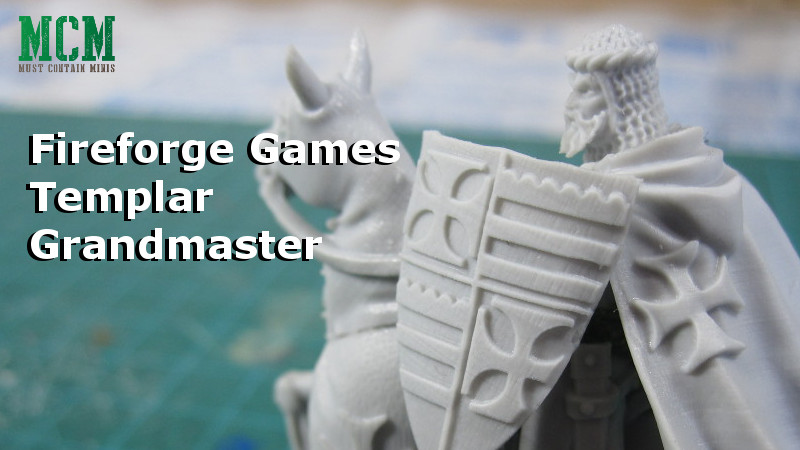 Fireforge Games has captured my attention for a long time. They make plastic models that fit for both Historical and Fantasy miniatures game enthusiasts. In this post, I write a quick review of their Templar Grandmaster miniature. Before I get to that miniature though, I want to discuss a little bit more about Fireforge Games in general.

As mentioned above, Fireforge Games focuses in on Fantasy and Historical miniatures. They make 28mm figures, and many of their kits are plastic. Fireforge Games’ model kits cover the Dark Ages, Medieval Times and their own Fantasy World. On top of that, Fireforge also makes their own line of 28mm Fantasy Football miniatures. If that wasn’t enough, they carry products by other manufacturers too. The settings they carry minis for from other manufacturers includes Frostgrave, Late Medieval Battles, Napoleonic Wars, and World War 2. You might have even seen previews about a 1:1800 WW2 Naval Combat Game that they are currently working on.

Back to their fantasy setting. Fireforge Games’ own fantasy world is called “Forgotten World.” You may remember this game from the post I wrote about their campaign. Check out the upcoming starter set below. Wow!

Fireforge Games sent me some Forgotten World miniatures to look at. I am so excited about that and will be writing about them in the near future! These minis are available for pre-order now.

Fireforge Games also surprised me with a few more miniatures. They sent me two blister packs of their historical Crusader miniatures. These minis are beautiful and in this post, I take a close look at the miniatures in one of those sets.

The Templar Grandmaster miniature comes in a clam-shell of two minis. One mounted, one on foot. You can find these minis off of the Firelock Games website by following the Historical -> Characters menu options of their store. The minis are made in a soft resin that slices very easily. You will want to be careful as you build these figures so you don’t accidentally cut something you shouldn’t.

If I remember right, the foot soldier came in 8 pieces and the mounted warrior came in 10 or 11 pieces. Each figure came on a single resin sprue. The minis came with square style bases, but I mounted the foot soldier on a 25mm round base rather than the squared one provided.

Check out this mini. The details on this mini are so crisp.

What do you think of this model? I like it a lot.

Here we have the Templar Grandmaster on horseback. Again, fantastic details. This time, I made a few mistakes while building it. Not all of the pieces fit together 100% for me, but I think that was my error. I decided to fill in the small gaps that I made with green-stuff. Now, let’s take a look at the mini.

Overall, a clear and crisp miniature. The next miniatures by Fireforge Games that I built I did a better job on. I did not need any green-stuff on those ones. I think the issue here is due to builder error.

As the first miniature that I ever built and constructed from Fireforge Games, I can confidently say that I like the Templar Grandmaster. This is a nice looking historical miniature with lots of character. As with most minis, you could easily use these figures for various fantasy games or as a RPG Miniature if you didn’t wish to use them for their initial purpose. Special thanks goes out to Fireforge Games for sending me these miniatures.

Tell me what you think of these minis.