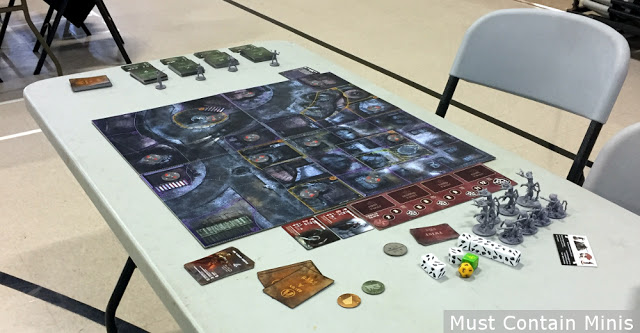 Recently, I took Fireteam Zero to a board game night at a local community center. There, I got a group of four players (counting myself) to run through the second act of the Typhon’s Children Campaign.

In this Act (entitled Village Recon), our heroes made it across the river (from Act One) and are now searching for an artifact in a village. Again, I played as Rat, the close-combat specialist.

This time, when we rolled for random deployment of the monsters, we ended with most of them being extremely close to our starting spot.

On his first turn, Rat entered the square of the closest corrupted human and took him out!

So far, so good. All of the other characters then followed Rat into his square except for Sonny. Sonny instead moves to his own spot and gets taken out by a different corrupted human.

Right away, this game was looking forbiddingly hard yet again. Now that the coin is flipped (due to Sonny taking a fall), the full team loses the game if one more person goes down. Sonny decides to stand up on his next turn. With all the monsters coming for us, we had to move fast!

Using this technique, we were able to save a turn or two of combat by skirting around the building down below.

On the next turn, a player pulled out a bombshell for all of the monsters. He threw down the Tactical Response card killing a ton of monsters!!!

When the monsters respawned, they were fairly spread out. For the rest of the game we were just maneuvering and clearing out spaces, while checking different spawn points. The pressure on our team was further reduced as we flipped the coin back over after finding one of the side objectives.

Instead of an artifact, we found a journal that told us to where the artifact was moved. Victory for the players!!!

Overall, we had a good time playing this game. The players were able to have a little fun at my expense as I forgot the rule book at home. That said, the game is simple enough that I was able to remember the rules off the top of my head. The only two mistakes that we made were…

Aside from those two rules, we played everything correctly. Unlike the first time, we stuck together as a group, and in the end, achieved victory.
Special thanks goes out to Emergent Games for sending Must Contain Minis a review copy of Fireteam Zero. The verdict is that it is a good dungeon crawler game with a theme that I enjoy.

If you are interested in Fireteam Zero, they are currently running a Kickstarter for a second printing of the game. Be sure to check out the link below for more information on that campaign.

Disclosure: Emergent Games sent Must Contain Minis a Review Copy of Fireteam Zero and two of the expansions.

Blood and Plunder Battle Report – The English Come to Town