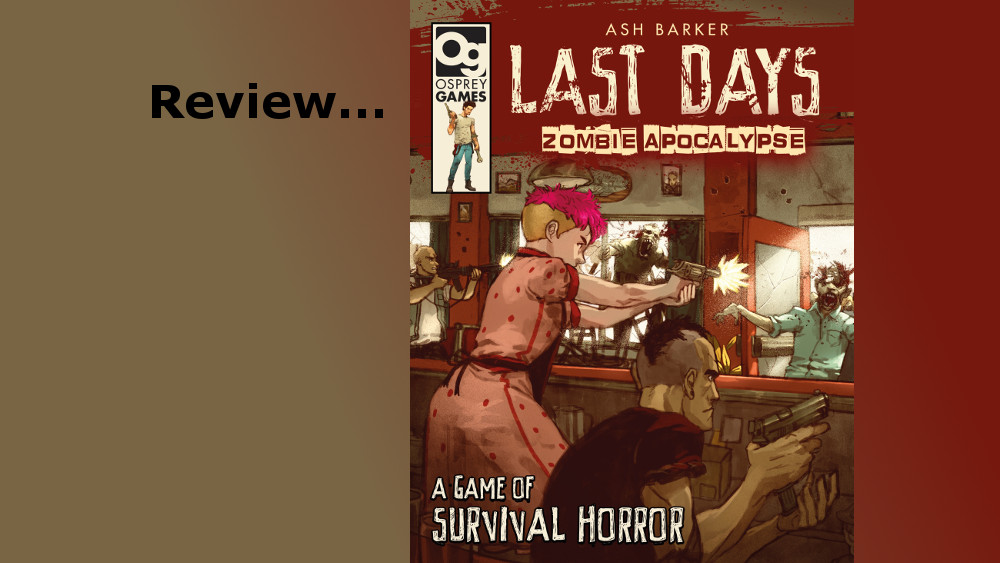 In the Interest of full disclosure, Osprey Games sent me this book for review purposes. That said, I really looked forward to receiving this book for a few reasons.

One of those reasons is that Ash is a somewhat local guy to me. He lives about an hour-and-a-half drive from where I do and I follow his YouTube Channel – Guerrilla Miniatures Games. Not only do I follow his work, but I also appeared in three of his videos for Frostgrave.

Another reason I looked forward to Last Days is because I just like the theme of the game. I also have plenty of miniatures and terrain that I can use to get into the game quickly. Unfortunately, the move to a new house got in the way of me actually getting the game to the table.

That said, it is a good read and I like what I see here. I do believe that you will see some Battle Reports for the game in the future.

Earlier, I wrote an article about my First Impressions of Last Days: Zombie Apocalypse. This article is a full review of the game.

The premise of the game is simple. You are a survivor of a Zombie Apocalypse. Why did everyone turn into Zombies? It is not clear, but you could make up your own reason for you Campaign if you want.

Your group of survivors will spend their days defending a Refuge. Some days you will have to leave that refuge, and other days, you will have to fend it off from attack. With Zombies everywhere and groups hostile to your efforts, how are you going to survive?

Choose your leader from one of three different archetypes, choose your refuge and hire your group members. Don’t forget to outfit your guys with weapons as the world out there is unforgiving.

The game itself is played on a 3′ by 3′ table. You can play on a bigger table if you wish, but 3′ by 3′ is recommended to give the Zombies a better presence. Speaking of Zombies, you are going to need about 20 Zombie Miniatures and a handful of miniatures per survival group (most survival groups will start with 6 to 8 models and likely end up with 8 to 14 models).

Once you have your minis and survival group ready, you are good to go. Of course, games like this one do best with lots of terrain on the table so be sure that you are well stocked in scenery too.

Gamewise, the mechanics of Last Days: Zombie Apocalypse are very simple. In fact, there are just 16 to 19 pages of core rules depending on how you count them. Outside of that, there are another 9 pages of special rules which cover the skills and abilities available to your characters and equipment.

The quick summary of the rules is as follows…

There are five phases.

Players resolve each phase together. No one gets to move and shoot all of their guys all at once. Instead, they step through the phases and alternate back-and-forth figure-to-figure.

The Menace Phase contains rules for Noise, Ammo and Zombie Activation. It is here that you may find that your gun ran out of bullets or that all the noise they have been making attracted more Zombies to the board.

In this phase, players take turns moving their figures. Each figure has a set number of action points per turn. Each point allows you to move an inch, or you can use those points to do other actions such as run (moves farther, but makes more noise and makes it so you can’t shoot this round) or go into Locked and Loaded for 4 points (basically Overwatch but you are also allowed to still take your normal attack during your shooting phase).

In the shooting phase you choose your target and make your shots. The person that took the first action in the Action Phase acts second during the Shooting Phase.

To hit, you are making a rolled test versus a set value of 7 using your firearms skill, a roll of a d6 (six-sided die) and a handful of modifiers.

When two models get into close combat, they make opposed tests using a d6, their Close Quarters Combat statistic and a few other modifiers. The model with the highest roll is the winner of the combat.

After that, damage is resolved.

During the End Phase, Courage Tests are taken if needed.

Back to the top

After the End Phase, players go back up to the first phase again and repeat the phases again.

Of course, there is more to the game then what I outlined here, but I wanted to give you a taste of the game without giving away too much of the book.

Last Days itself is very simple, but its charm is in its campaign rules. This is the sort of thing that I really like. Character and base development. I talked a lot about this in my First Impressions Article, but we are going to take a look at it a little further here.

When recruiting, there are 15 character types to choose from for your non-leader characters. Characters get 8 stats each and special abilities too. As characters level up, they can gain better stats or abilities.

Through this mechanic, you can watch your characters learn and grow into better survivors.

Now what gets me really excited about this game is base building. You can choose your refuge. Some examples of Refuges include a Farm House, a Mall, or even a Church. Each come with different character capacities, empty spaces for upgrades and built-in perks.

The empty spaces you use for upgrades. Below is a sample page showing some of the upgrades you can take for your base.

In many games, what you do in your fort doesn’t matter too much. In this game, there is actually a chance for you to design a battlefield based on your base! How cool is that!!! Reminds me totally of the base defense mission of the old computer game X-Com!

Below is that mission!

Outside of this encounter, there are 5 others that players can play through. Each could be played multiple times if one wishes.

For those that have not read my reviews before, I do not assign scores. I find that what I like about a game, others do not and vice-versa. What I think is most helpful to readers is information on what the game is like and about. From there, you can make up your own mind on whether you want to get into it or not.

Hopefully you enjoyed this review of Last Days: Zombie Apocalypse published by Osprey Games and written by Ash Barker. Personally I really like the game and am looking forward to setting up my new studio so I can get some pictures of this game in play.