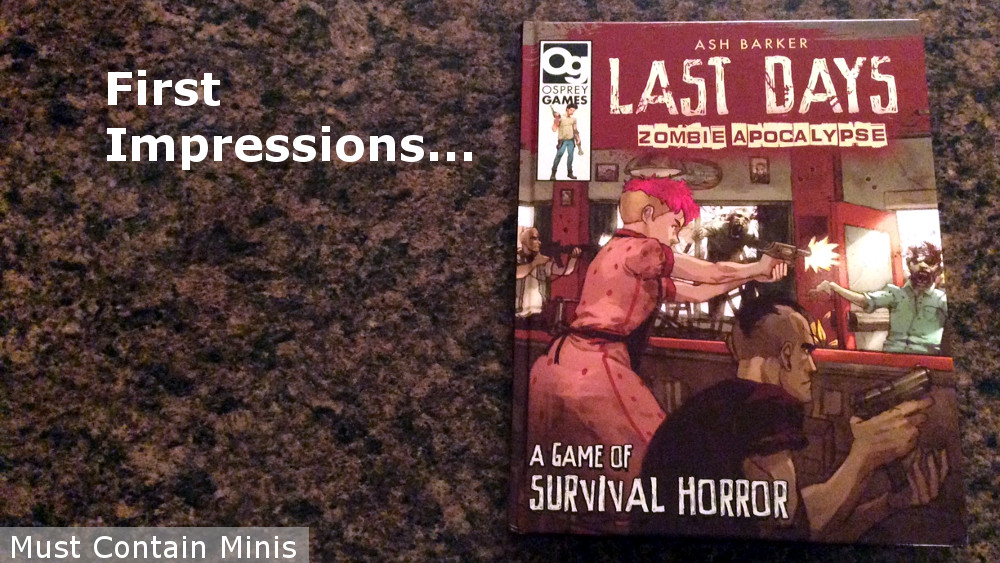 Osprey Games has really been hitting it out of the park with their miniatures games of late. I don’t know if you have heard of Last Days: Zombie Apocalypse by Ash Barker, but it is a game that I have been waiting a long time for with a lot of anticipation. Osprey Games sent me a review copy of the book, and I was not disappointed!!!

Ash Barker (the Author) included a lot of great elements that really make a game for me. This game has Warband Creation, Character Development, Base Building and some Cool Rules.

Today’s post is a brief article featuring my first impressions of the game. I plan to do a fuller review later, but with a school course, full-time job and a house move in the mix, I am not sure when I will complete the full review.

One thing that I really like in my games is Warband creation and the ability to choose out your own characters. In Last Days, your warband is referred to as a “group.” You get to choose a leader, hire group members, and arm the group. When you initially choose the characters, you can arm them as you see fit. Some weapons (especially military grade weapons) are restricted to only certain leader types at the top of the game, but these weapons can also be acquired as you play.

As a note, when you create (hire) your characters, that is the only time that you can choose their armament. In all other instances what your warband has is based on what you can salvage during game play.

I really like that Ash allowed players to choose how to arm their Survivors when they are hired as I like using WYSIWYG (What You See Is What You Get) models. Keeping things WYSIWYG is much more difficult when your equipment load-outs are random. As the game goes on, you can purchase more Survivors for your Group, upgrade for your base (Refuge), and guard your base from Zombie attacks.

Like many of the games that I enjoy now, this game features character development. Your characters can all learn skills as they gain experience. The skills are somewhat predetermined as each survivor type (i.e. Cop, Goon, etc.) has certain skill groups available, but players roll randomly on those skill tables to see what skills the player actually learns. The skill rolls can be slightly modified by paying extra experience.

On top of developing in Skills and Characteristics, each model has a keyword. This keyword determines how the model fits in with the leader. Only 25% of your group can be made up with characters with a keyword different than your leader’s. That said, your leader can have a chat with someone of a different keyword between games.  If that chat is successful, than that person’s keyword changes to that of their leaders. This leads to some rich campaign rules.

In Last Days: Zombie Apocalypse you build up your group of survivors and their place of refuge. You buy upgrades to your refuge and the upgrades you choose can even come into play physically when other players raid your base. That’s right, people can raid your base!!!

You can set up Fences, Fortified Windows and even a Watch Tower to help protect your refuge. Perhaps you might want to go a more peaceful route and build less militaristic options. That is possible too. You can build Gardens to increase your revenues, an Infirmary to treat your injured, or Bunk Beds to accommodate more survivors in your Group. Whatever you choose, you get to also model in case someone attacks your base. To me, this is cool and a huge selling feature of the game. How often someone actually raids your base though is likely not that frequent. Regardless, this is cool!!!

As you guide your survivors and try to avoid wounds, you level up your characters – and (unlike other games) you upgrade all of them. I wanted to point this out as some people complain that only Wizards gain levels in Frostgrave. Overall, this product was worth the wait. I can’t wait to move into my new house and give this game a try!

Getting into the Game

Where do you get the models from? Anywhere!!!

Personally, I will be starting into this game with a collection of figures that I already own by RAFM. What figures will you use?

For those wondering, Last Days works on a D6 system, so make sure you have D6s too (I doubt finding those dice will be a stretch for any of us).  🙂

As I stated earlier, I am really impressed with the quality of books that Osprey has sent me of late. Burrows and Badgers, Outremer and Last Days: Zombie Apocalypse are all great books. Last Days, in particular, I think has a good chance of becoming yet again another run-away success for Osprey. If it does, I wouldn’t be surprised if we see expansions to this cool game.

Stargrave Creatures and Aliens: What do I need?