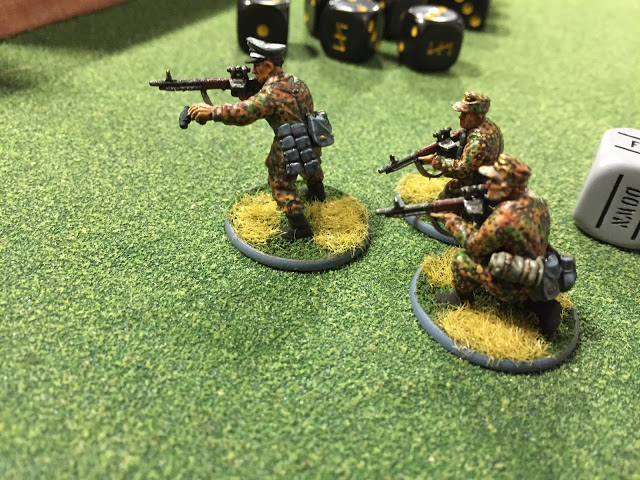 This week, I got a game of Bolt Action in at my favourite local gaming store (Forbes Hobbies). My opponent for the week was Roy. There are a few things about Roy that I would like to share now. First off, he is a fun and friendly guy that happens to be amazing painter. Second, this was Roy’s First Game of Bolt Action. And Third, Roy is a bit of a power gamer and he gets a lot of enjoyment about planning out the best possible lists that he can make.

Before I made my list, Roy disclosed to me that he was bringing a platoon full of Fallschirmjager without a single vehicle. He also warned me that his units all completely kitted out with Automatic Rifles and the maximum allowable number of Panzerfaust. I figured that I would like to have some fun with this game and see how well a strongly mechanized Platoon would do against Roy’s all infantry Army. We decided on play 1200 points.

Roy’s army consisted of three large units of Fallschrimjager fully loaded with Assault Rifles and Panzerfaust, a Panzerschreck team, a Large Anti-Tank Gun, Medium Mortars, a Sniper and a Couple of Command units. All of his soldiers were rated as Veterans. I brought to the table two 10 man squads of Regular Infantry with one Bren and one SMG each and a regular Forward Observer. The rest of my force was rated as Veteran and included three Universal Carriers for the purpose of transportation, an Otter, a Sherman V, two 5 Man units with 3 SMGs each, a Flame Thrower Team, a Medic with his helper and a Commander with his aid.

For the Mission, we rolled Demolition. The goal in Demolition is to have a unit touching the enemy’s base marker at the end of any given turn. The table was set as below. Both Roy and I placed the objectives in diagonally opposite corners of the table. That is my objective on the bottom left and he is placing his over on the top right.

At this point, I was happy to concede victory to Roy. Having destroyed my Otter, I had no push left that could get to his objective fast enough to win the game. At this time, it was a question of whether I could withhold the overwhelming opposition and drag this game out into a draw. I had lost 4 units to Roy’s loss of none and the units that he had left were in good shape while mine were weakening.

Over at the other table, a couple of the guys were playing Tank Wars. Hanging out with friends and playing Bolt Action was a fantastic way to spend an evening.

I hope that everyone enjoyed this Battle Report. Until next time, happy gaming!