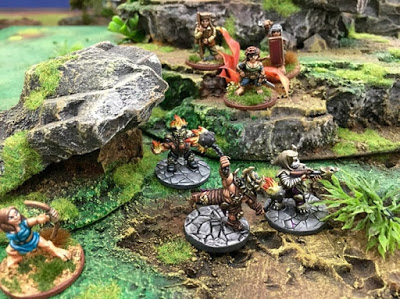 When I first started this blog, I wanted to shine a little bit of hobby light on items that capture my attention. One of those items that has captured my attention more than once is A Song of Blades and Heroes by Ganesha Games. Lately, this game has come back on my radar for two reasons.

Personally, I have not yet played a game of A Song of Blades and Heroes. I can tell my readers though that I did thoroughly enjoy A Fistful of Kung Fu and the two games share plenty of the same mechanics. For those that are interested, please feel free to read my review of A Fistful of Kung Fu. Ganesha Games describes A Song of Blades and Heroes as follows on their Kickstarter Page.

ADVANCED SONG of BLADES and HEROES is the updated incarnation of the award-winning Song of Blades and Heroes miniatures system, which was funded in our previous Kickstarter,Hammer and Forge. With these rules, you can play fantasy skirmishes in any scale, with any models you already own. With an easy to use magic system, an exciting turn sequence, an optional background setting, weapon rules, an open-source point system, and combat mechanics that keep players involved at all times, there is no limit to the epic stories you can create.

Aside from my positive experience with A Fistful of Kung Fu, I have read and seen a number of positive reviews on the Web about the Song of Blades and Heroes miniatures systems. One of the “Youtubers” that I like to watch is Uncle Atom from Tabletop Minions. In one of his videos, he discusses why A Song of Blades and Heroes is his favourite game to run at conventions. For convenience sake, I have embedded the video below. He holds an older copy of the rules, but check out his thoughts about the game.

The last time that this game system really hit my radar was when Ganesha Games ran the Hammer and Forge Kickstarter, which is a Dwarf expansion for A Song of Blades and Heroes. The concepts introduced looked interesting and I really like that they encourage the use of models by any manufacturer. That said, Ganesha has their own line of figures and that is part of the reason for the Kickstarters – to get those miniatures produced.

AXE and BRIMSTONE is a narrative campaign for you to use these miniatures in ADVANCED SONG of BLADES and HEROES. It will tell the story of the Possessed (a group of evil, demon-worshipping dwarves) that are trying to summon their dark masters to the material world. In order to gather enough magical energies to open the gates to Zo, the region of the Netherwhere (Hell) where the demons are confined, the Possessed must offer a number of innocent souls in sacrifice. And what is more innocent than a village full of peace-loving, land tilling Halfling farmers?

Two additional warbands are being Kickstarted for this campaign. These warbands represent Halflings and Possessed Dwarfs. All of the following images are from the Axe and Brimstone Kickstarter page.

These are some interesting minis and the tabletop pictures look really good. It will be fun to see what else comes from Ganesha Games as they expand their gaming world.

Update (December 2, 2017): Axe and Brimstone is now available on Amazon.