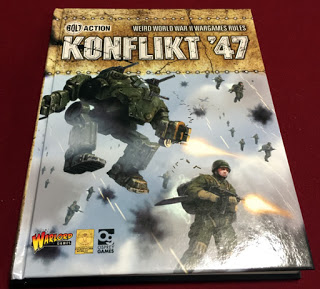 When I got home, I was absolutely thrilled to find a copy of Konflikt ’47 sitting in my mailbox.

Now, Osprey sent me this book for review purposes and I could not be any more pleased. Upon receiving the book, I cracked it open and looked through its pages. It is gorgeous. Even my wife looked through it a bit and started picking out some of the artwork that she thinks I should share with my readers. Normally she does not take this kind of interest into my hobby, but she enjoyed seeing the full paged artwork within and thought that the pictures of the Zombie troops taking on American G.I.s and some Russian Ursus soldiers (Werebears) destroying a recon group of German soldiers might be worth sharing. I agree with her, but I won’t be taking any pictures out of the book until I do a proper review.

To begin my article series into Konflikt ’47, I will likely start by fleshing out possible army lists that I could get all-in and build. These lists will be using what I already own for Bolt Action and branching off from there. Later content should consist of some battle reports and ultimately a review of the book itself.

Initially though, after just cracking it open, I can confidently state that the book looks gorgeous and is of the high-production values that we have come to expect from Osprey Publishing. It follows a similar format to the original Bolt Action with some noticeable tweaks. Changes to Close Quarter Combat seems to be one of the more obvious changes. After the rules section is the section about Force Composition. One will find army lists to build American, British, Russian and German forces here just like in the original Bolt Action.

It is going to be a lot of fun getting stuck in on those army lists and figuring out how I am going to proceed into Konflikt ’47. I plan to share that journey with my readers.

Until next time, Happy Gaming Everyone!

The Wargame Vault and DriveThruRPG