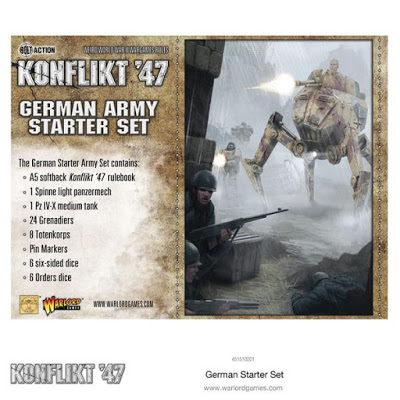 I am very excited about Konflikt ’47 after receiving my book from Osprey Games. When Konflikt ’47 was first announced many months ago, I intended to get in on the game by buying a Konflikt ’47 German Army Starter Set. Boxed sets always seem to be the most economical way to get in on a game. Unfortunately, due to real life constraints (and the fact that Bolt Action 2 and Konflikt ’47 are released so closely), I will be getting in on Konflikt ’47 piecemeal.

Instead of buying the above boxed set, I will begin with what I already have. Hopefully I will have Band of Brothers (the Bolt Action 2 Starter set) from my favourite FLGS sometime this weekend. In that box are 12 German Soldiers and a SdKfz 250/10 half-track. I already own two Panthers from Tank Wars so that gives me a base of about 860 points if I run them all as Veterans. A standard sized army is 1000 points.

A friend gave me a number of winged creatures that resemble Nachtjagers to act as Demons in Frostgrave. I could easily proxy those models in for a unit or two of Nachtjager Assault Squads. To get to 1000 points, from the initial 864, I need to spend 136 points. That happens to be exactly what a fully kitted out Nachtjager Assault Squad costs. Without spending any additional money, below is what my first 1000 point Konflikt ’47 army would look like.

The nice thing about the above list is that it would get me into Konflikt ’47 without spending any additional funds. Personally, I am fine with proxy units and would never give anyone a hard time about the use of a proxy unit provided that the models resemble what they should. That said, I would likely want to get the official models if I enjoyed running the list.

Having 864 points of a German army makes it easier to get in on Konflikt ’47. Basically, I just have to buy one unit and I have enough to get involved. I could move the 250/10 from the recon slot into a transport slot and add a regular Spinne Light Panzermech for a 989 point list. I could also buy a box of German Infantry and get stuck in with a fully compatible Bolt Action force. But what I would really like to do is get in with something I like the for its looks. I want an army that looks cool!

The currently released German units that look the coolest to me are the Wehrmacht Heavy Infantry Squad and the Schreckwulfen. Creating an army with the Schreckwulfen seems pretty easy. Add 6 Schreckwulfens and with the remaining points, a second extra can be added to the First Lieutenant’s squad. To field that second Aid, I would have to buy a few more infantry models in addition to the Schreckwulfen.

Making an army with the Wehrmacht Heavy Infantry fit what I already have is a little more complicated because a full squad of them costs more than the remaining 136 points. The points needed can be reached by dropping the Lieutenant’s extra man and by dropping 3 of the 4 Panzerfausts. Either squad could be given the Panzerfaust for the same points, but I decided to give it to the Veteran Infantry Squad. Having dropped most of the fausts, this army will have to rely on the two vehicles to to provide any necessary anti-tank power.

This final platoon would by my favourite way to start. I have visions of running a large number of these guys and their tank hunting units too. They are slow on the battlefield, but they would be backed up by other units. Once I have my base German army, I can play with points by lowering their skill level and buying more units to fill 1000 point lists.

Other models that I am really interested in seeing for the Germans include the Waffen-SS Shocktrooper Squad, the Fallschirmjager Falcon Squad and the Thor Heavy Panzermech. So how is everyone else getting into Konflikt ’47? Are you buying in piece-by-piece like me or are you buying in with an army box? Are there any particular units that capture your imagination?

As a disclaimer, I do not yet have the Bolt Action 2 boxed set, and as such, I am unaware as to whether it can be built to kit out 12 Assault Rifles. I am assuming not, but I am daydreaming that it can be for the sake of simple math. I also happen to know a lot of German players in my area, so I could ask to check their bits boxes if I needed 12 Assault Rifles that badly.