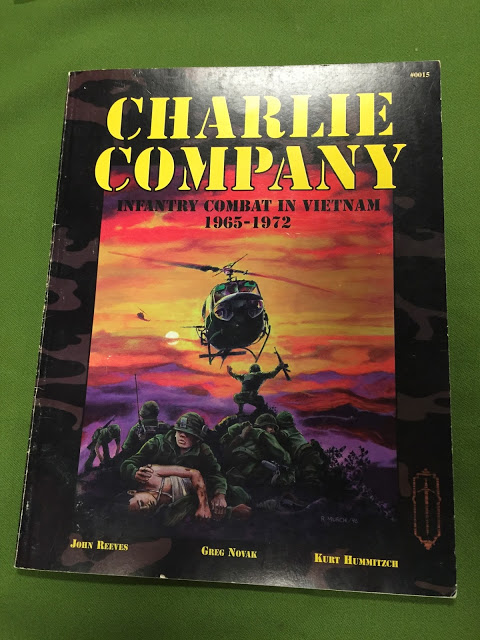 Today’s game report is about my first game ever of Charlie Company. As such, it is fitting for me to write this article as a game report while detailing my initial impressions of the system.  Be sure to click on the images to see them in their full size.

I have seen this game played at multiple conventions but have never actually played it myself. At all these conventions, the excitement and commotion caused by this game is great. When I saw it on the games list for Lords of the North’s Games Day, I had to give it a try.

Right away, the game was described to me as a game about the Campaign System and the missions are to be strung together. Being a demo game at a convention though, we only saw how a single engagement played. To start, we were each assigned a miniature. That miniature represents us. If that mini dies, you lose. It doesn’t matter if the mission was successful or not. This element added a neat aspect to the game. In a campaign, that character has to complete a one year tour of duty. A tour of duty is 12 games, or more specifically a year represented by one game highlighting each month’s deadliest conflict. The conflicts themselves are fully pre-scripted by the Game Master. As such, it is the players versus a story (like a game of Dungeons and Dragons) rather than the GM versus the players (like a typical war game). I understand that the outcome of each mission affects the later games, but I am unsure how this is done. Needless to say, it is a very cool concept and lately I have really been enjoying games with a campaign system.

Our Game Master was Graeme (a Playtester working on tweaking the rules for a future edition) and his help for the game was Dave (one of the game’s original illustrators). It was absolutely awesome to be introduced to the game by two people that know it so well that they were involved in the game’s creation. Graeme talked about how the company plans to streamline the game in future releases, but as the game stands now, it was a blast. Our figures were revealed. Mine was the lieutenant and the other player’s character was a squad commander. Our goal was to get from one side of the board and exit on a specific spot on the opposite side of the table.

Overall, I had a great time playing this game. It was really awesome to have one of the play testers host the game and chat with one of the illustrators. The game was published in 1986 but in this demo game, it held up well to today’s competition. Whether that was because our Game Master just knew the rules really well or the game is just simple to understand, I could not discern. There are a fair number of charts in the game to refer to while playing. Our GM knew most of those charts by heart.

It was interesting to note that the GM mentioned that they were testing ways to streamline the rules, but if you want to buy into a fun Vietnam game, this one is quite affordable. The rules themselves are only $12 Canadian. Blister packs are $8.95 to $9.95 and the two available boxed sets are $42.95 for the American USMC platoon or $26.95 for the NVA platoon. These miniatures are all in 20mm.

Would I play this game again? Absolutely! It was a ton of fun and I would really like to see how the campaign system strings together. Will I be buying into the system? Probably not. There are other games that I want to get into and other collections that I would like to finish first. RAFM sponsored this table and was kind enough to give everyone that played the game a Blister Pack of Soldiers. I took one of the NVA blisters and am grateful for the swag. It is really nice of them to give out miniatures at this event.

This game would be right for anyone that would be interested in the Vietnam War and wants a campaign system to play through a “tour of duty.” I believe it would be great in a club enviroment where you play the same people repeatedly and I found it a lot of fun as a convention game. At just $12 for the rule book, it would also be worth while for any collector that likes to read miniature rule books for the sake of reading them. I myself often fall into that category.

I hope that you enjoyed this battle report. If you did, please head over to my Facebook page and give it a Like.

Returning from Hotlead – What a Rush!!!