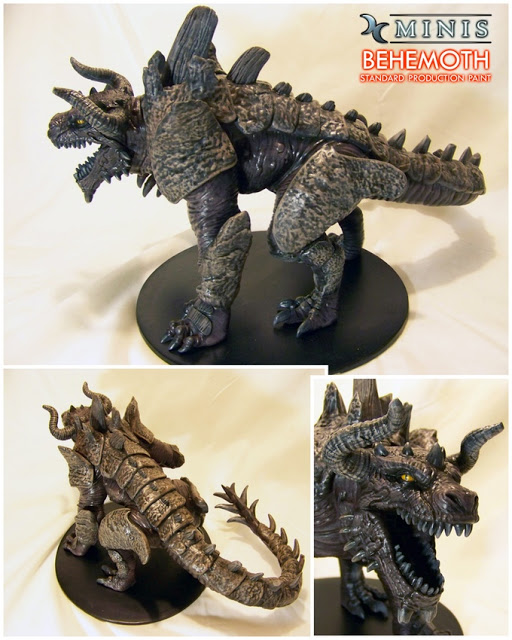 Approximately 4 weeks ago I wrote a Frostgrave post that mentioned a friend’s Kickstarter – The Behemoth by Dungeon Crawler Minis. I wanted to give a quick update to my readers on how that project went. In the end, Gifted Vision did not make it to their goal – instead they made it about 3/4s of the way to their goal. Since then, Jey has decided to try and Kickstart the project again.

This time, he has painted models of the Behemoth posted along with a video showcasing the size of this Behemoth. This model looks huge and can be purchased as either a pre-painted or un-painted miniature! All of the following images in this post are from Gifted Vision’s Kickstarter pages.

This time, I think Jey really has a good chance of breaking through his funding goal and getting this miniature off the ground. Already, the project reached over 50% of its funding goal and there are still 32 days left to the campaign at the time of me writing this article. It was actually near the end of the last Kickstarter attempt that pictures of the product started to appear. Before then, the campaign was relying on concept drawings / 3D renderings and written descriptions to get across that this product is cool and huge. With product shots now showcasing the model, I believe that this Kickstarter will be much more successful than the previous attempt.

In the interest of full disclosure, I would like my readers to know that this is not a sponsored post; however, Jey does run in my group of local gamers and I would like to see him and his project do well. It is pretty exciting to see someone that you know taking the courage to put themselves out there and try to bring something really cool to market. To see the campaign for yourself, check out this link to his new Kickstarter.

I hope that you enjoyed reading this post and below are some more pictures of the product being Kickstarted.