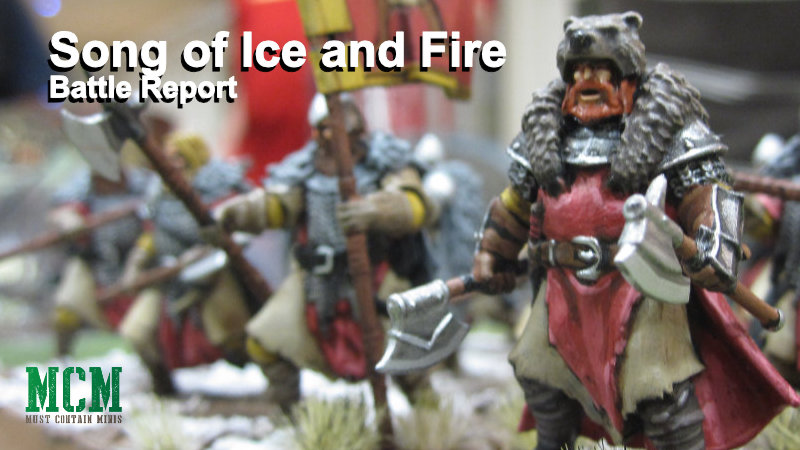 Now, let’s get into the Battle Report.

I pulled up to the gaming table on the left and had the army below to work with.

The miniatures for A Song of Ice and Fire look great. Check out this unit lead by The Mountain on my side of the table.

To start, I moved up my forces up aggressively while keeping my cavalry a little back. The idea was that once my main lines got close to the enemy that my cavalry would bust through and start taking out enemies in close coordination to the main force.

At this point, I took a few more close up pictures. These are nice miniatures for sure.

Back to the Battle…

The time arrives and I unleash my Cavalry to devastating effect.

Back to the Ice and Fire Battle Report

At this point, things seem really in the Lannisters’ favour. A group of Lannister Spearmen make advances towards some Stark Infantry. The Starks outmaneuver the Lannisters and hit them on their flank.

The Mountain’s unit takes out the Dire Wolf. The Starks’ mounted unit then takes out what is left of the Mountain’s men. In desperation, I rush my Cavalry into the Full strength unit of Stark Infantry. The Cavalry hits hard!

The Lannister’s strike back and below is the final picture of the game. You can see that the Lannisters are in slightly better shape, but I am not so sure that they would win if they continued.

Hopefully you enjoyed this battle report of the first time that I played A Song of Ice and Fire. Overall, I really enjoyed the game, and find that it has a board game type feel.

Again, I played this at Hotlead 2019 at one of the participation game tables. The event runs again this year March 20 to 22 in Stratford, Ontario, Canada. I will be there.

If you liked this post, be sure to check out my Showcase post showing off the work of Derek and Lauren Hall.