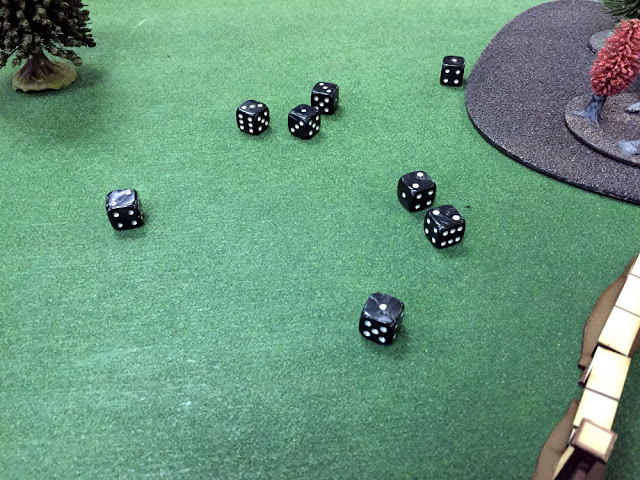 …Yep, that is pretty much how the entire game went.

Now this was my second game in the Bolt Action Tournament Series at Council Fires 2016. This is the same tournament as what I wrote a Battle Report about earlier. We rolled to be on the same table as before, but this time, I was the defender in a different scenario. This time we played Surrounded and my opponent was Jeremy.

My forces were the exact same as in the last game…

I believe his force was all rated as veterans.

Given the size of Jeremy’s units, I figured that this game would be a blood bath for my forces. My key strategy out of the gates was to take out his Sherman to eliminate his anti-tank capability and go from there. For my deployment, I placed a full sized platoon at the base of the building in the middle, an observer on the second level, a five man squad on the third floor and a five man infantry squad just outside of the building in a Universal Carrier. Jeremy’s first wave came on as pictured below.

With a nice grouping like that, I called in an artillery strike, but the artillery missed its mark and floated off the table. It would have been a nice hit if the dice were on my side.

At the top of turn two, I brought in a Recce Universal Carrier to flank his side of the table.

Jeremy walked away as the victor in this game. In this scenario, the win conditions are that one force has to kill two more units than the other side. Jeremy lost no units while I lost 5 (2 Universal Carriers, a Flame Thrower Team, a PIAT Team, and my Lieutenant). Overall, it was a good game, but I think I should have played more aggressively. It is kind of a risky game on my part in that I have just one squad big enough to take on an American squad in a toe-to-toe assault.

I also encountered the issue that my dice just weren’t rolling like they should. I had a lot of really bad rolls through out this tournament series. It is a good thing that I mainly play for fun.As an interesting side note, Jeremy owns Forbes Hobbies (the store that sponsored this tournament) and also happens to be the very guy that sold me my dice. I wonder if he hexed them before I even bought them.  🙂

For those somewhat local to Cambridge (Ontario, Canada), Forbes Hobbies is looking at doing a tournament in late January in their store. Tentatively, the date is set for Saturday, January 28 (2017) and the games are to be with 1000 Point Painted Armies. It would be great to see gamers from the London, Toronto, Hamilton and Niagara areas make it out to this event. Of course, be sure to check with the store before just showing for a tournament.  🙂