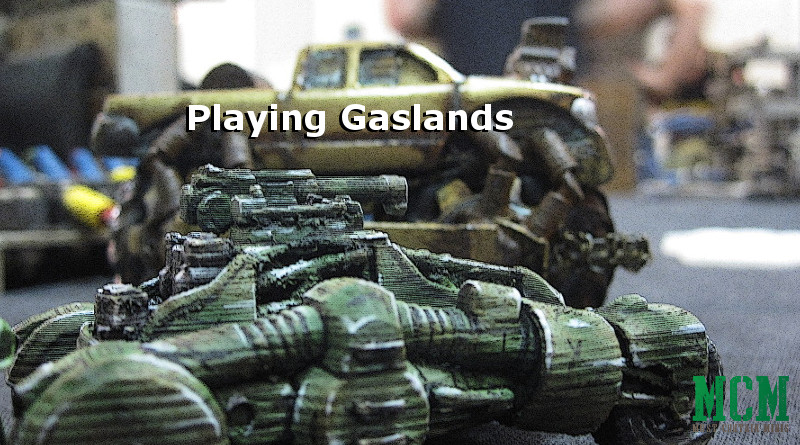 This past weekend at Ragnarok XP (a local Convention), I gave Gaslands a try. Gaslands should ring a bell for you as I have wrote about the game before on this website. It is an extremely affordable miniatures game by Opsrey Games. Today’s post is a Gaslands Review and Battle Report.

If you follow this site, you will already know that I like this game. One of the things that I like best about the game is its value. It is so affordable to get into! You can get all-in with just the rule-book and some matchbox cars. Of course, you need some dice too, but outside of that, you are set to go!

Other pros that the game has going for it is that it is fast and easy to play. Plus it also has campaign rules.

It has been a while since I last read the book. When I learned the rules originally, I just played solo games in my basement to test the game out. I didn’t publish any Battle Reports or a full out review of the game. Although I did not publish a review, I was not shy about sharing my favourable opinion of the game. Now that I got a few turns in a group environment under my belt and have read the rules a few times, I feel more comfortable giving a full review.

At Ragnarok XP Dave Garbe of Wargaming Tradecraft ran a demo of Gaslands. The pictures in this article are mine, but the table and miniatures are his. Like me, Dave likes to introduce new people to the hobby and different games. I have been a long time fan of his website for painting inspiration and blogging advice.

As a note… I decided to do something different with the pictures in this post and make them a little more cartoon like for fun.

For those of you that don’t know, Gaslands is a post-apocalyptic vehicular combat game. You take part as a team leader that hires a group of cars (and drivers) to participate in televised Death Races. The big prize is a chance to get off the post-apocalyptic planet of Earth and move to the much nicer colonies of Mars. It’s a simple story, but it gets you into the action.

In a regular game, you spend 25 to 100 “cans” to buy your team’s cars and equipment. A standard game of 50 points will likely get you two to three cars depending on how you upgrade them. If you are getting into the campaign system (or just want to add more flavour), you can add sponsors to the game. Sponsors give your team different perks and benefits. One of them, for example, can purchase tanks and helicopters for their team. Another sponsor (the Warden) runs the prison system. The Warden’s prisoners drive weaker cars that the audience loves to see explode!

For the demo Dave ran, I played as a single vehicle. That vehicle was a giant Monster Truck set up as a “Monster Cycle” with just two wheels.

Having read through the rules twice in the past, I was already familiar with the game. That said, I forgot a lot of the rules (symptom of reading so many systems), but they came back very quickly. My friends at the table with me had not read the rules. They picked up the game very quickly too. We were running the game on our own by the end of the first turn (four phases in our case).

The Most Complex Rule…

The most complicated thing for people to get their minds around (at least for us) was the idea of Gear Phases within a turn. Every turn there are 6 Gear Phases. In Gear Phase 1, all players in first gear get to play. Most players will gear up while they play. In Gear Phase 2, all players in Gear 2 get to go. Then in Phase 3, all vehicles in 3rd gear get to go. This goes on for 6 phases and at the end of the 6th Gear Phase, the turn is over. Then you go on to the next turn starting with everyone in Gear 1. In a way, it felt like you get up to six turns in a turn. 🙂

Once you get your head around the concept in the paragraph above, the game is very easy.

In continuation of the Gear Phases, vehicles have a top gear. The truck I ran for the demo maxed out in fourth gear. That means that gear phases five and six were completely blocked off to my vehicle. The highest gear I could shift into was four.

Like X-Wing, movement is done through templates. Unlike X-Wing, you do not have to pre-plan your movement. In Gaslands, you choose your movement template at the start of your activation for the Gear Phase. The gear you are in limits which templates you can choose. You place the template, roll your handling dice and the result of those dice can alter the way you move. Sometimes for the better, and sometimes for the worse.

For weapons, the number of d6s in the book determines how many six-sided dice you roll. You roll vs a target number (4+). Every 4+ is a hit, but 6s count as two hits. The target may evade looking for 6s. Each 6 cancels one hit, and they get to roll one die for every gear they are in. Someone in fourth gear gets four evade dice. Collisions between vehicles work in a similar fashion with some differences.

Overall, the game is very easy to learn and lots of fun. Dave Garbe did a great job running the demo and that certainly helps.

For anyone wondering, my opinion of the game remains the same. It is easy to get into, fast and fun. The best part for me is that this is the most affordable game I can think of for anyone interested in miniatures. Buy the rules, some toy cars and you are off to the races! To make the value even better, Osprey Games currently offers four free expansions to this game on their resources page. That is a lot of game for a very low price!

I highly recommend it for anyone that might want to get into post-apocalyptic vehicular combat or that just wants a fun and affordable game.

In the interest of keeping my readers informed, I believe that there is a revised and enhanced hardcover copy of the rules coming out later in the year. That said, if you want to get your hands on the original rule-set, that is also currently still available. The original is the version that I played at this convention and it was a lot of fun! The link below is to the enhanced version.

That concludes my Gaslands Review, now let’s take a look at some of the action from the Demo Game.

Highlights from the Death Race Demo…

Getting a game of Gaslands in has been on my to-do list for a very long time. In this section of the review, I will be talking a little bit about the demo game at Ragnarok XP.

Dash from the Gate…

First off, I got to the table late, but Dave took me in anyhow. My friends Dave, Randall and Carl were just finishing up their first turn. Dave quickly briefed me on the rules and I was off to the races in my “Monster Cycle!”

At this point the little green car between my Monster Cycle and the Hummer disappeared. Turns out it was a hologram (a way to explain Carl out of the game as he had to leave for a while). With the car out of the way, the Hummer drove up further. I performed a hairpin turn and rammed right into him. The turn caused no damage to my vehicle (other than gaining a few hazard tokens) but gave Dave (playing the Hummer) some hazard tokens and five damage. His vehicle has a total of 12 hit points – so he was hurting but far from dead.

In the rules of this scenario dictate that weapons do not activate until you pass the first gate. In the turn ahead, all three of us pass that gate. Unfortunately for me, my only weapons is that I am good at running other vehicles over.

Taking out the Hummer

Meanwhile, the Hummer went out of control after too much fancy driving and flipped. It then got stuck in first gear. With me in fourth, I saw my opportunity to run the vehicle over again. Being that Dave was in first gear, he could not activate during gear phases two, three or four, while my Monster Cycle could!

This ram caused more damage and left the Hummer with three hit points.

Sadly, both Dave and Randall had to go at this point. I stayed behind for a while and chated to the game host, Dave Garbe. The game is a lot of fun and I would have liked to have keep going. Oh well. Perhaps next time.

I had a lot of fun going through the Gaslands Demo with Dave Garbe. Thanks goes out again to Wargaming Tradecraft for him setting up and running this table at Ragnarok XP in Waterloo, Ontario, Canada. Thanks also goes out to Osprey Games for the review copy of Gaslands that they sent me some time ago.

Again, I highly recommend Gaslands for anyone that finds it interesting. The game is quick, fun and affordable.

Hopefully you enjoyed this Gaslands Review and partial Battle Report.