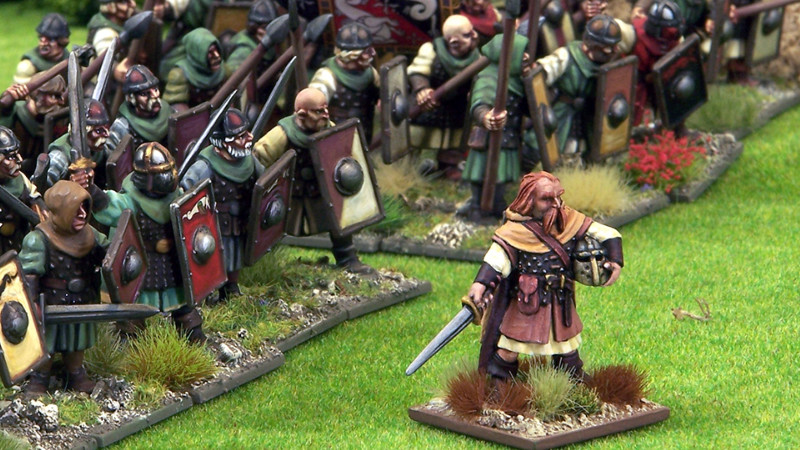 In this post, we are going to take a look at the armies of Oathmark as presented in the core rule book of the game.

For those that do not know, Oathmark is a Kingdom building mass scale miniatures wargame by Joseph McCullough and published by Osprey Games. Must Contain Minis also has other articles about Oathmark. Be sure to check those out for more on the game. My most popular Oathmark post to date looks at the basic infantry models of the game.

In this post, we pay specific attention on the armies and units that you can field in Oathmark. Although this article is not a review of the game, I categorized it as a review because it will give you a really good idea of the units you can take in the game and the differences between the races.

For those that don’t know, the Kingdoms in the core rule book include Dwarf, Human, Elf and Orc/Goblin.

As a note, special thanks goes out to Osprey Games for sending me a copy of the rules for review.

Inside the rulebook, players are encouraged to play in one of two ways. The first way is for each player to choose one race from the book and keep their army selections to just that race. The second way is by creating a Kingdom. The Kingdom method allows you to build your own allowable units for the game. Which regions you choose to house in your Kingdom define which units you can hire in your army.

This second way is what appeals to me most because I like campaign system games. In the second method, you design your own kingdom. You get to decide which territories your Kingdom will contain. Those territories (or terrain features) dictate which units you can take in your army.

It is worth noting here that while Oathmark has its own line of miniatures, you can also use whichever line of miniatures you like best. It is miniatures agnostic but their miniatures look great too. I especially like their dwarfs and humans. Now, let’s talk about Kingdom building.

A beginning Kingdom contains 10 terrain spots. In the core book, each race has 9 terrain types of terrain available to them (except the Dwarfs who have 8). This means that if you concentrate on just one race, you can have access to all of their units right out of the gate.

Now, some of those terrain units give you access to a limited number of units, so you will want to select multiples to add to your ranks. For example, you can field up to 12 Ogres total in your army. A rough hills terrain element lets you take 6. To get the full 12 Ogres in your army, you have to take two sets of rough hills in your Kingdom. This takes away from the other options that you can select because you lose a slot to max out your Ogres.

In Oathmark though, all the races know how to get along for the most part. You are battling against kingdoms, not the specific races. Humans don’t hate Orcs here just like Elves don’t hate Dwarfs. What maters is who’s Kingdom do you belong to. You are encouraged to make your Kingdom how you want and to have it contain more than just one race.

While your human generals may not be as effective at leading a unit of orcs, you can gain access to a plethora of units by mix and matching.

The Armies of Oathmark

The Armies in Oathmark take on a very “Lord of the Rings” feel. There are no crossbows (or guns), but all races have access to bows. Most of the core options between races are very similar. Every race has access to Soldiers, Spearmen, Archers, Warriors, Linebreakers, and Militia of some sort. So, what are the differences?

In the section below, I go through the four armies and outline the advantages and disadvantages of each races’ core troops and make mention of their unique units.

As a note, if you are playing in a campaign game where you build a Kingdom, you can get access to any races’ “unique” units if you take in the right lands into your Kingdom.

Weaknesses: Slowest movement rate of all armies. No access to cavalry.

Unique Units: Indrik (wooly rhinoceros), Eachy (a large regenerating humanoid creature that can walk on land or water), and Barghest (giant horse-sized dogs that can vanish and reappear).

Weaknesses: The highest cost in points. No access to indirect fire weapons (catapults).

The Goblin and Orc Units

Strengths: Cheapest units in the game points wise. All melee units have Charge (1), which makes it easier to hit the enemy when attacking.

Weaknesses: Tied with Goblins for the worst activation (moral) values.

Unique Units: Wolves on their own, wolves as mounts, Trolls, and Knucklers (enormous amphibious serpents with a poisonous breath attack).

In the Armies Of Oathmark, there are a number of creatures that do not align with a specific race.

These creatures are available to all who choose the proper terrain piece in their Kingdom. This list includes Gargoyles, Bodachs (magical fey creatures that generally take the form as old men), Surmas (six legged serpents that can turn enemies to stone) and Dragons (with or without wings).

Drawing it Back Together

There you have it – the strengths and disadvantages of each race in Oathmark by Osprey Games. Again, this post covers just the units and races in the core rule book.

If you choose to play a single game where you each select a single race, this post will give you a good idea to expect from each army.

If you choose to play by Kingdom building, hopefully this article will help you decide which race to focus on (or if this is a game you want to explore further). What terrain types you choose for your Kingdom dictates what units you can field in your army. If you lose those lands in a campaign game (more on that later), then you can still recruit the troop type from that land but they take a small penalty in their activation value (moral).

That said, I don’t think there would be any issue if you buy the terrain element of the race that allows you the unit and field a human model (but using all of the elf stats and special rules). In fact, the rules allow you to build out your Kingdom like this so you can get the units you want. Why not go with a proxy and use the models you want too?

Hopefully you enjoyed this deep dive looking at the Armies Of Oathmark. Personally, I think this is a good start, but wish that the book also covered the Undead. It looks like the living dead will be covered in the second expansion, so here is hoping.

Right now, there are two expansions planned for the game and listing on Amazon. The first is Battlesworn and it is supposed to look at expanding on your game heroes. The second is Oathbreakers. I really want to take a look at that one. Oathbreakers looks to add in the the forces of the dead and also expand even more on the development of characters in the game.

The official lines of miniatures for the game come from North Star Military Figures. Thanks goes out again to Osprey Games for sending me this book for review.

For more on Oathmark, be sure to check out my Oathmark section and my article about WYSIWYG armies in Oathmark. Don’t forget to also check out my review of the game’s core rule book.