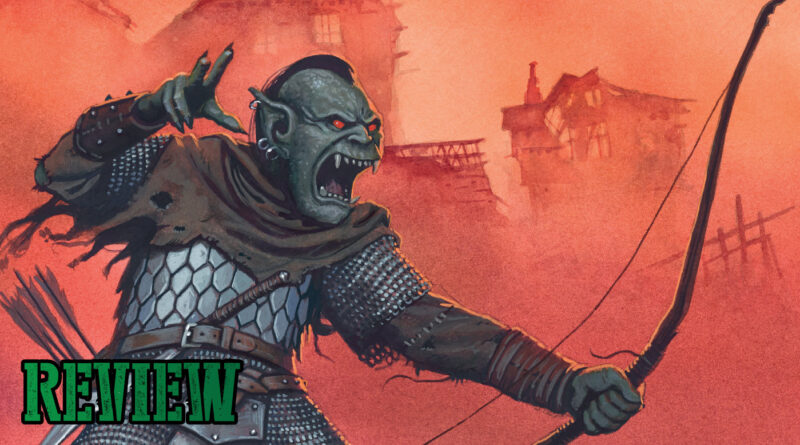 Oathmark is a game that I waited for with high anticipation for a very long time. Was it worth the anticipation? I think so. Osprey Games recently released this game by Joseph A. McCullough. Joseph also happens to be the author who also wrote Frostgrave. The publication date for Oathmark was pushed back a few times. During that time North Star Military Figures released figures for each faction ahead of the games’ release. Join me in this Oathmark Review to learn more about the game and my thoughts on it.

Before starting, I want to thank Osprey Games for giving me permission to use images from the book, and for sending me a review copy of the game.

I would also like to mention that Must Contain Minis has a number of Oathmark posts already to help you learn about what to expect from the game. Be sure to check out those posts after you read this review. Some of the posts of interest include a discussion of Kingdoms in Oathmark, a deep look at the armies in the core rule book, and a very detailed post on how to equip your armies to make them WYSIWYG in Oathmark.

With all that out of the way, let’s get in on this Oathmark Review.

First off, the production values in this book are excellent. I did notice one formatting error that I have to bring up though. On page 44, someone placed a picture over the last sentence of a paragraph. That is a little frustrating to find while reading through the book.

As for page 44, I did some internet research and found exactly what it is supposed to say straight from Joseph McCullough’s Social Media comments. The missing line states…

You must also move any other units that are in the way, just as with regular combat.

The above quote is from Joseph McCullough in the Facebook Group called “Oathmark Players’ Page.” I am pretty sure that they will fix this error in future printings of the book. In fact, I have a sample page with the text corrected. See below. As a note to explain the text on the image, you play Oathmark using 10-sided dice.

With this comment out of the way, I want to say that the artwork is awesome and I found very few other errors. A small thing here and there, but not much else.

Now, let’s talk about the units in the game.

How to Base Your Models

Oathmark is designed to be a “bring the models that you have” type of game, and the game is meant for 28mm miniatures. That said, there are some rules to unit composition.

The game expects your models to be based on 25mm bases for your regular sized infantry, 25mm by 50mm for your cavalry and 50mm bases for your large figures. 50mm by 100mm bases are reserved for your biggest miniatures in the game. It doesn’t matter if you use round or square bases. The official miniatures come with square bases, but I plan to base them on rounds because I plan to use them for other games too (like Frostgrave).

Below are the rules for the number of figures you can base in a unit and what size of bases they get.

I think some people might be turned off by the 25mm base requirement, as many other systems use 20mm bases. That said, I think it is a small problem to have. Rather than re-basing your figures, just toss them on larger movement trays, or go with 20mm bases if your opponent is cool with that. I certainly would not make my opponent re-base their army just to conform to the rules above.

As this is a mass combat game, you will find benefits to taking larger troop sizes for your infantry models. The maximum number of troops of one type that you can take is four and the maximum figures in a unit is 20. This means that you can field no more than 80 of a single model type. For most this won’t be a problem.

Now, let’s get into some of the rules.

I found the activation method in this game less frustrating than Dragon Rampant. You roll against your Activation number. If you pass, you can perform your full action (two actions). If you fail, you can still do a partial action. In Dragon Rampant, you don’t get to go at all and you lose your turn.

Activation passes back and forth until both sides run out of units to control. To determine who goes first, you roll for initiative. You do this with two dice. If one player rolls doubles, a random strange event happens. If both players roll doubles, then a catastrophic event occurs. These optional event rules give the game a little addition of flavour and randomness.

Once units come into combat, both sides fight. You will need to determine how many dice to roll. How many dice you roll is based on the front rank of your unit and the combat dice of each regular model in that rank.

You then calculate your target number to hit. A number of factors go into determining this number. Your fight skill, your opponent’s armor value, your number of ranks and other factors adjust your to hit target number.

The next three steps include rolling the combat dice, determining the number of hits and applying the hits to remove casualties. I included a sample page of those rules below.

As a note, this game plays on D10s and the most dice that you will ever roll at anytime is 5.

If either side takes casualties, then that side has to take a moral test. The unit that scores the most hits against the enemy then gets a few options in what is called the “pushback” stage.

Shooting works out very much the same way (but without pushback).

There are a number of advanced rules for players to take the game up to the next notch. Personally, I am going to try to get into the advanced rules as soon as I start playing, but that is just how I roll. Now, let’s take a little look at some of the advance rules in this Oathmark review.

Advanced rules in Oathmark mostly include rules for characters. We are talking about Commanders, Spellcasters and Champions. When you sport a character, you can choose to fight with the entire group that the hero is in, or with the hero alone. When you go with the hero alone, you get to use the hero’s statistics and the models in the unit essentially become his (or her) hit points. Unlike other games, heroes are not super powerful. While you might choose to fight with your hero alone, there will be plenty of times that you will be better off using the fight stats of the unit they are in instead of fighting individually.

Below I included one of the pages about characters in combat and commanders.

Now, I will say that Commanders are very expensive in terms of points, so you will have to make sure you use them to the best of your ability. There are also options for you to split and join your troop units together if you wish. That is kind of cool.

Reading along, there are also rules for Monsters, Artillery and Magic Items after discussing characters.

The campaign rules I already somewhat covered in my other posts. Basically you build a kingdom by selecting what lands your kingdom contains. Those lands dictate which units you can buy for your army. You can mix races too if you have the proper lands in your kingdom. If you want a human army with goblin allies, you can do that.

As you battle, you work your way towards the enemy’s capital. If you take their capital, you win. As you take their lands, the enemy loses some of their abilities for the correlated units from those lands. They can still use those units, they are just not as good until they take the proper lands back.

If you are interested in how the different races play, and how to build your models as “What you See is What You Get,” Must Contain Minis has articles for you!

First off for this Oathmark Review, I want to say that this book was an enjoyable read. It is a great book with high production values. I really like the combat rules and love that the game comes with campaign rules. There is not much “fluff” to the system, but I was never a fan of game “fluff” anyhow. I just want to roll dice and play games.

One thing this game does not have is “buckets of dice.” I like that they run the rules on ten-sided dice, but the most you will ever roll at a time is five. For me, that is a small minus because I like lots of dice. On the flip side, limiting the number of dice to five will make the game run faster.

There is some math to determine to “hit target” numbers and the points for your army, but nothing that would be a deal breaker for me.

The difference between the races is subtle, but it works. I would have preferred to see more than just four races in the core rule book. This is not a game that will fit every army you have from other games as WYSIWYG. That said, proxy in the models you like for this game. If you have a whole bunch of Halfling miniatures, substituent them in for Goblins, Humans or Dwarfs. Perhaps you have Lizardmen. There are no rules for them here, but proxy them in as Orcs. These are narrative games and it is really up to you and your opponent on how to play.

Oathmark comes with the right amount of tension for a combat game and the heroes do not seem overpowered. It will be interesting to see how the planned expansions effect the system. I, for one, am looking forward to collecting more Oathmark books and models.

The rules to the game are fairly simple, but at the same time complex enough to include decent rules for ranks and flanks. I am a fan.

If you like campaign rules and want to check out a new fantasy mass combat system, Oathmark is worth a look. The game comes across as properly balanced and I really like that there is a campaign system. On top of there being a campaign system, Osprey Games and North Star Military Figures are throwing some money behind this game too. There are already two expansions planned for this system (I can’t wait for Oathbreaker) and there is a growing collection of plastic miniatures specifically for this game.

All of this is very exciting and I can’t wait to see what else the two companies have in store for this Oathmark. If you get in on this game, don’t forget to head to Osprey Games’ Resource Page to pick up a copy of the latest play aids including the quick reference pages.

Thank you for joining me in this Oathmark Review.

I would like to quickly thank Osprey Games for sending me a review copy of Oathmark. I really enjoyed reading this book cover-to-cover.

Oathmark is available through many excellent suppliers including Osprey Games and North Star Military Figures. If you want to pick it up here, and support Must Contain Minis, we have affiliate links to DriveThruRPG and Amazon.

7 thoughts on “Oathmark Review – A Look at the Core Rules”