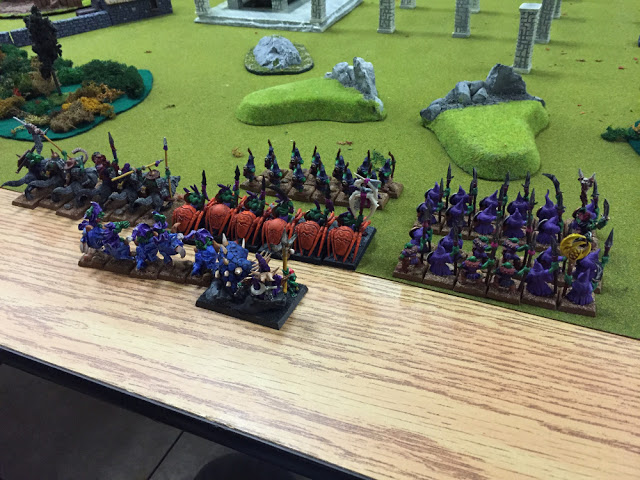 Recently, I played a game of Dragon Rampant at a convention and was it ever fun! Waiting for us at the table were 6 armies (Lizard Men, Orcs, Goblins, Ogres, Middle Earth [Lord of the Rings] Orcs, and Wood Elves). Quickly I sat at one of my favourite fantasy armies – the Goblins.

This is not a specific Mission from Dragon Rampant, but rather a custom scenario designed by our Game Master to get multiple people engaged with the rules at once.

At the start, I was a little overwhelmed with the army sheet when I noticed each unit had 10 stats. When the Game Master discussed the stats and what they meant, it didn’t click for me right away, but once we got playing, my understanding came very quickly. Of those 10 stats, three of them are actually activation values. These activation values were something that I had not seen before in other game systems.

The Quick Lowdown of the Rules

On a player’s turn, the player selects unit to activate and makes an activation roll. If the roll succeeds, the unit does what the player wants. If the roll fails, the player’s turn ends. For Activation Stats, there are three different values (Attack, Move and Shoot). The lower the value, the easier it is to take that action. For example, my Light Riders had an attack of 7+, a move of 5+, and a Shoot of 6+. To take the named action, the player needs to roll two dice and get that value or higher. Right away, this adds an interesting dynamic in that there is now strategy on what to activate first and a fear of having to give the turn over to the opponent. Do you do what is easier for your models first? Or do you activate what is most important first (even though it might be a tougher roll)?

For now, I will focus on the narrative game that unfolded before us using Dragon Rampant by Osprey Publishing. This game was hosted at Council Fires 2016. At the end of the article, I will switch back to discussing the rules and my initial thoughts of them.

The Wolves Step it Up

Unfortunately, this is where this game timed out.

According to the Game Master, I believe one of the Orc Armies won for captured villagers, but bragging rights were also bestowed upon the Lizard Men on the Left side of the table and Goblins on the right side for max aggression and battlefield domination.

Right off the bat, I can tell my readers that this is a game that would be best enjoyed as an engagement between two armies. There was a fair bit of downtime because there were so many players. That said, the GM did a fantastic job achieving his goal in introducing us to the basic mechanics of the game. We all caught on very quickly and were able to run much of the game on our own within a couple of turns.

My Thoughts on the Game System – Dragon Rampant

Personally, I found the activation system intriguing and enjoyed the simplicity of the game. As stated earlier, each unit gets one activation a turn. When a player decides to activate a unit, they roll two dice and compare the number rolled to the related Activation Value. Back to the example of a Light Rider, those values are 7+ to attack, 5+ to Move, and 6+ to Shoot. This means that certain units have a greater propensity to activate for certain actions. This is an element that I really liked, but it is also a feature that I cursed a turn or two when I was only able to move one or two units. One round, I didn’t even manage to activate one unit. That sucked, but I figured that is just my troops having a hard time following commands during the fog of war.

The battle system was fairly easy and enjoyable. It involved rolling target numbers on a certain number of dice. Each target number matched or exceed counted as a hit to the target. Count the number of hits and for each time that number matches the armour value of a unit, it takes a wound. Back to my Light Riders, they have an armour value of 3. For every 3 “hits” that the opponent rolled, one model is removed. Units attack at Full Strength or Half Strength so number crunching is easy as a unit loses models (Wounds).

I found this game so much fun that I found myself wanting my own copy of the rules. Osprey Publishing was more than kind and sent me a copy when I asked about the game.

Update: February 20, 2018. For those interested, Rebels and Patriots is another iteration of this core rule set with some alterations. If you are interested in a similar game in a different setting, we have a Battle Report and First Impressions Article for the game.