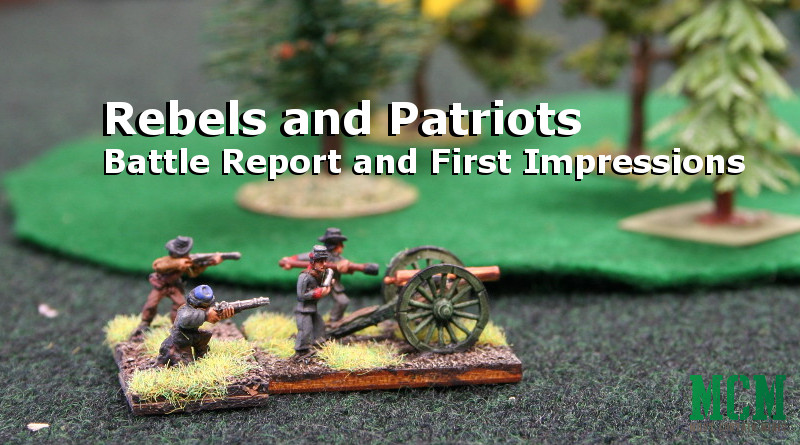 A couple of weeks ago, I received a copy of Rebels and Patriots from Osprey Games. Thank you very much Osprey for sending this book along to me for review. In this post, I give my first impressions of the book and present a battle report that went down at a local gaming club. Now, let’s quickly discuss the book.

Rebels and Patriots is the 23rd book in Osprey Games’ blue cover wargame title. I’ve said it before, and I will say it again – the value of Osprey Wargames is unbelievably good. This is especially true for their blue book series. If you like collecting or reading rule-sets, this collection is great. Generally, $20 can get you an interesting rule set with great artwork. That value is hard to beat!

Now, let’s talk about Rebels and Patriots. This book covers pretty much every black powder conflict in North America from Colonization to the Civil War. These conflicts include the…

That is a lot of conflicts covered by a single set of rules.

Rebels and Patriots is intended for company sized skirmishes, ambushes and escort missions. In fact, there are 12 different missions in the book. For game play, you are going to need 40 to 60 models a side along with a four-foot by four-foot table. It is recommended that you play using miniatures based on 25mm bases (that is how most of my 28mm stuff is based), but you will see in my Battle Report that the guys used 15mm miniatures with 2 to 3 figures per stand. To determine casualties, they used markers and removed the base once the set number of models on the base have been taken out of battle.

In this game, you follow the adventures of your Commander. He can gain experience as he fights. Every time he ranks up, he gets a random trait. 36 traits are provided in the book. An Officer starts as a Second Lieutenant and can gain four ranks to become a Major. Once the rank of Major is exceeded, the officer will retire from Rebels and Patriots as he will now focus on larger battles. As in some other games, the Officer represents you on the Battle Field. Keep him safe, but keep in mind that he leads by example so be courageous too!

The rules themselves I won’t get too far into with this post. I will save that for a future post. Suffice it to say that if you are familiar with any of Daniel Mersey’s rules, you will recognize the mechanics in this book. It is very much like Dragon Rampant and other books by him with some modifications.

On to the Battle!

Vidal Bairos (The Union) and Tony Stapells (The Confederates) met on the field of battle in this not so civil American Civil War conflict. The mission they would play is “First Clash at Lament Ridge.” In this mission, there is an objective marker in the middle of the table (they used a distinctive die), and the goal is to hold the marker for the most turns while causing casualties to your opponent and avoiding casualties yourself. The game goes to a minimum of 8 turns with a variable finish turn so you don’t know exactly when the last round is until the game ends.

Both sides brought their forces to the table. The Union came in with a mix of Regular soldiers with a few elites. Meanwhile, the Confederates brought a stronger army with all Veterans to the table.

The Confederates brought the Canon (pictured in the cover image of this article) as well as 2 units of veteran infantry, a unit of Calvary and an officer. A force of 34 miniatures total – again we have an extra model on the table representing the officer, but in the game he is simply supposed to replace a model within a unit rather than being an extra figure.As you can see, the Union out numbers the Confederates. The soldiers’ ranking affects how easily they activate and, as the two guys played the game, we learned that the difference of “one” makes a big difference in determining the activation result. Some of the Union soldiers disobeyed a lot of orders because they were not as disciplined as the Confederate veterans.

Right off the top of the game, the Confederates man-handled their cannon to get it in a better position and advanced some of their troops.

On turn two, the Confederates are actually the first to try to take the hill. Remember, whomever is within three inches of that marker the most turns by the end of the game gets extra points towards victory.

Taking of the Ridge

At this time, things are looking pretty good for the Confederate Army in holding this important vantage point.

Sadly for the Confederates, holding the ridge does not prove to be as easy as being the first to its summit. In fact, the officer rolled badly a couple of times for his unit activations. To activate, you roll two dice and aim to get a 6+ after modifiers. If you roll double 6s to activate, something good happens. If you roll double 1s, something bad happens. The Rebel Officer failed twice and rolled the same result each time. He crapped his pants twice. From the book… “Brown trousers! Your Officer acts without boldness and loses 1 Honour from his total score in this scenario. You will read about this incident in the newspapers within a week.”

While the Confederates were in the lead, these accidents puts them at a disadvantage for when the game is scored at the end.

With their reserve unit at the base of the hill, the Confederate force re-takes the top of the ridge.

Now, you can’t see it in the picture above, but the Confederates still have an artillery piece by the edge of the forest on the far left. It has been firing shots as much as possible, but their aim has proved to be especially bad today.

The game ended as a victory for the Union Soldiers. I must admit that at turn five, I didn’t think they would be able to pull out a win, but they did. They earned more points than their enemy for kills and units left alive at the end of the game. They also held the hill in some miraculous way longer than the Confederate soldiers.

Again, it did not help that the Confederate Officer had two embarrassing accidents during the course of the battle. Soiling his pants twice made him lose two honour (points) for the game, which help solidify the Union win.

Hopefully you enjoyed this Battle Report and First Impressions Article of Rebels and Patriots.

Overall, this game was very quick and could likely be played in an hour by people that know the rules and don’t slow down game play to take pictures. The rules are simple and familiar in that they are alterations to Daniel Mersey’s other games. The core mechanics remain the same. The book itself covers many conflicts and could be of interest to many collectors due to the variety of battles that you can do with the book.

Vidal Bairos (The Union) and Tony Stapells (The Confederates) had a lot of fun playing the game and I enjoyed watching the action. They personally liked the Officer traits in the game and it would be interesting to see what new talents the Officers learn as they progress through a campaign. Thank you to both Vidal and Tony for letting me write this battle report.

Disclosure: Osprey Games sent Must Contain Minis a copy of Rebels and Patriots for Review.