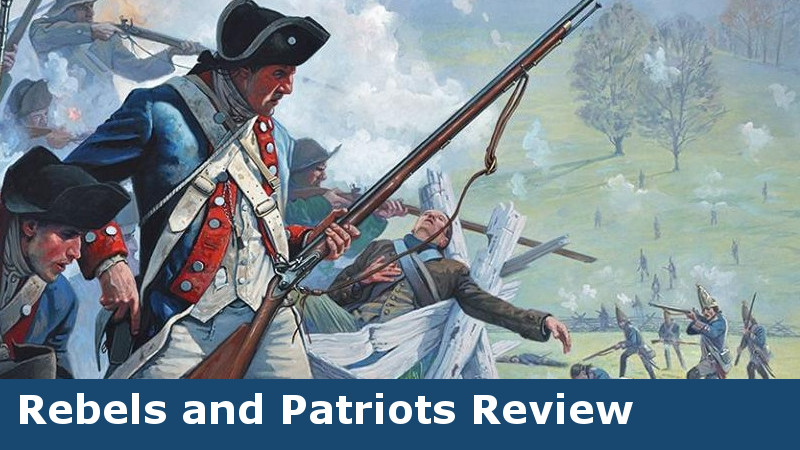 Please note that the pictures within this post are used with the permission of Osprey Games. Osprey Games also sent me a copy of Rebels and Patriots for Review.

What Miniatures Do I Use?

Like pretty much all of Osprey Games other systems, Rebels and Patriots is miniatures agnostic. Use whatever miniatures you have. The rules are also scale neutral. Use whatever you have – 28mm, 20mm, 15mm, whatever you and your opponent have available. Now, they do have recommended base sizes, but were able to play the game well with different bases than those recommended in the book. As far as number of miniatures, you are looking at 40 to 60 models a side to play this game.

What Conflicts Does Rebels and Patriots Cover?

This game covers a wide variety of conflicts in North America. Below is the list.

That is a lot of conflicts covered by a single set of rules.

As a note, one of the guys at the FLGS says that he believes that these rules could be used for European Conflicts during the same time period too. I would agree with him.

The Fourth in a Series…

Rebels and Patriots happens to be the fourth iteration published by Osprey of the Lion Rampant Ruleset. That’s right. The same core rules also run Dragon Rampant, The Pikeman’s Lament and Rebels and Patriots. Now, this game was also influenced (and co-authored) by the Author of The Men Who Would be Kings. This makes for a fairly good and refined book.

Of the books above, I have played Dragon Rampant and enjoyed that experience. Theme wise, that would be my favourite of the series. That said, I like the rules within Rebels and Patriots more so than those in Dragon Rampant. Daniel and Michael made a number of changes to the rules from previous versions. The first thing that I noticed was the use of target numbers and flow of turns.

Changes from other Iterations

I am not going to go through all of the changes between the books, but I will outline the ones that I found significant. If you feel that I missed some important ones, please add onto this post in the comments section.

The flow of turns is a big change. In Dragon Rampant, you roll two dice and try to score equal or higher to your activation number for the particular action. Once you fail that roll (or you use all your units) the turn passes over to your opponent. This made for a nice feeling of having some units better at fighting, shooting or moving than other units. It also made for a feeling of “fog of war” and some frustration if you rolled bad on the first few units. There was nothing worse than rolling once, seeing that you failed and having your opponent get a whole new turn.

In Rebels and Patriots, the authors did away with that unforgiving rule. This time, everyone tries for the same activation number, but certain things will give you bonuses (or minuses) to the roll. If you fail, the unit you rolled for misses its turn and you move on to the next unit until you have tried to activate everything. This really does feel a little more fair (even if you liked having your opponent miss their turn due to a single bad dice roll).

The other big change from Dragon Rampant and Rebels and Patriots is that Rebels and Patriots sports a better fleshed out Campaign System with leveling up for your commander. That’s right, you get to track experience and roll for traits for your officers in Rebels and Patriots. I think that is pretty cool and any game that has a well done campaign system is already halfway there to winning me over.  🙂

Another big difference is the ability to form Close Order and work within a formation. I have not played Pikeman’s Lament, so I don’t know if that game had it or not, but in Rebels and Patriots you can get your men in order and volley fire. When you do this, facing matters. Outside of Close Order, the game is much freer and facing does not matter. This gives the game a little bit of Rank and Flank versus Dragon Rampant.

Setting Up Your Officer

I really like it when miniatures games contain some RPG like rules. I like leveling up characters between games and like it even more when I can pick and choose my crew. You get that in Rebels and Patriots to an extent. In this game, you follow the carrier of your officer.

As you can see, each trait gives you an actual in game bonus or penalty. Pretty cool. Here is hoping that you have good rolling. I am of mixed mind about random traits. I always prefer to pick mine out so I can create the exact character that I want. That said, there are plenty of more people out there that like the random aspect.

Once you start playing, your character levels up and gets more rolls on the traits charts.

One of the great things that I find about most Osprey Games is that their artwork is phenomenal. Rebels and Patriots is no different. You get great artwork throughout this book sourced from related titles in Osprey’s Historical lines.

That said, you do get more original artwork in Dragon Rampant, but I like the pictures of the miniatures in Rebels and Patriots better and Rebels and Patriots takes on a more serious feel than Dragon Rampant. If you buy this book, you can expect to be treated to a number of illustrations from the various conflicts that this book covers. These illustrations all seem to be sourced from Osprey’s historical books, which is okay with me.

As a note about the rules, when you roll double sixes for the activation test, you don’t just pass the test, but also get a random boom to help you out in some fashion. Likewise, if you roll double ones on an activation, something bad happens. This negative effect can range from your men firing on their own troops to your officer losing Honour because they soiled their pants. This leads to some interesting story telling during your games.

This book contains a total of 12 scenarios that you can play through. Better yet, you can string them together in a campaign and level up your officer. Rather than going through all of the scenarios, I figured that I would post one of the scenarios here. This is the full scenario for the Bridge to Victory.

From it, you can see that you are playing on a 48″ by 48″ table. All of the scenarios play on this size of table, but they do recommend a 48″ by 72″ table for multiplayer games. The Honour Points are basically experience points for your Commander. Whenever you reach a certain threshold, you level up your officer and get a new trait.

All of the scenarios focus on smaller engagements in larger conflicts.

Wrapping up the Rebels and Patriots Review…

Overall, I like the Rebels and Patriots rule set, even though I prefer playing different periods. While this book focuses directly on the conflicts in North America, I am pretty sure that you could easily use the same rules for skirmishes in Europe during the same time period.

The rules are light and easy to learn. If you already know the other rule sets related to Lion Rampant, you are even further ahead in learning this game. There are some nice changes here versus the other rule set and overall the book is well done.

For the $20 American that this book costs, it packs in a lot of value.

Hopefully you enjoyed my Rebels and Patriots Review. My goal of this review is to inform my readers more about the game and allow them to make up their minds on whether it is a system that they want to pursue further.