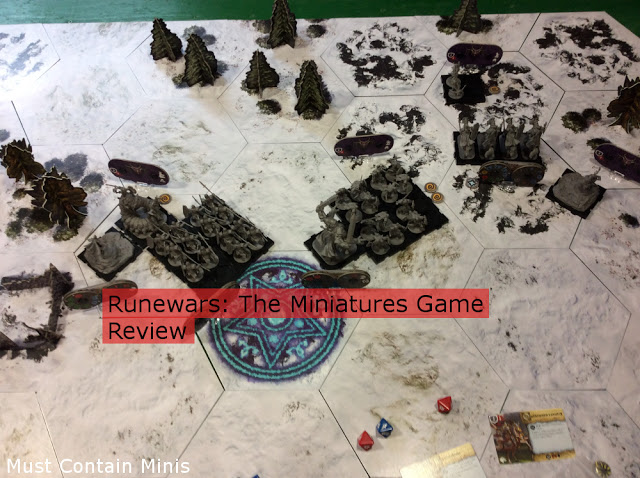 In the last days of March, Asmodee sent me a copy of Runewars: The Miniatures Game by Fantasy Flight Games. Originally I had planned to do an unboxing article, but many people also got Runewars at Adepticon so instead, I decided to take my time with this game.

This review focuses only on my thoughts of the game. It does not go deeply into the mechanics of the game or how to play. It does go into what I consider good and bad about the game.

For those that do not know about Runewars: The Miniatures Game, it is a fantasy miniatures combat game that uses mechanics similar to X-Wing and Star Wars Armada. The game itself is very good, and players familiar with the concepts in either of the above two games should be able to grasp this one fairly fast.

The miniatures in this game are okay. Plenty of other companies make nicer figures. As far as putting them together, most of these miniatures are two to three pieces. Earlier, I did two scale comparison articles about the game that you can check out with the links below.

While it would be quite easy to take the miniatures from this game and use them in other games (such as Dungeons and Dragons), it would take some work to proxy models from other games into Runewars simply because of the way the bases snap into their movement trays.

Game play wise, Runewars is great – but not the type of game that will satisfy all gamers. It’s more complex than X-Wing but less complex than many other games on the market. It actually has the feel of a board game crossing over into a miniatures game. The reason it feels like a board game is because it has tons of tokens, dials, and templates. In fact, this game has 9 movement templates and a “Command Tool” gadget for every unit on the table.

The core box comes with four pieces of 2D terrain. Honestly, I think this game works better with 2D terrain than 3D terrain simply because of its reliance on movement templates.

There are also three books in this boxed set. The books are titled “Learn to Play,” “Rules Reference,” and “Lore Guide.” The “Lore Guide,” I looked through but did not read thoroughly. I am not a huge fan of fluff and I am already familiar with Fantasy Flight Games’ Runewars universe through their other games. The artwork in that book is fairly nice. The “Learn to Play” book is geared to beginners and very easy to use. The actual quick start rules are just 14 pages long with lots of images. The “Rules Reference” book is also quite useful. I found myself flipping through a few times while playing for more advanced rules. The Reference book is 22 pages long and well indexed.

The rules I found very easy to grasp and I think anyone already familiar with X-Wing, Star Wars: Armada, or Descent should be up and running in this game without much difficulty. A lot of the concepts and terminology in this game comes from those games.

For those that want a flavour of how the game plays, below are two links to Runewars Battle Reports.

I found both armies in the starter box to be fairly well balanced. Without upgrades, the Core Box comes with 96 points of Waiqar (undead) and 99 points of Daqan (humans). With upgrade cards, it is easy to carry a side up to 110 to 120 points. 200 points is considered to be a standard game in Runewars. This means that you and a buddy will each have a complete army if you split two starter boxes of Runewars. That means that a total of $200 can get two players each a complete army. That isn’t too bad of a price point for a miniatures game, but most people will not stop at just two starter boxes.

Each unit has an expansion box that comes with different unit cards (adding to what is already in the core set). This gives an advantage to someone that expands by buying small unit boxes instead of two cores. Meaning that the starter box is just that, a start (or introduction) to the Runewars: Miniatures Game. If you want to be a competitive player, be prepared to buy individual units.

At Must Contain Minis, we don’t assign scores in our reviews. This absence in scores is in recognition that what one person likes, another may very well not. I would not be surprised at all if some of the aspects that I listed in my “Good” list would actually go in the “Bad” list for someone else. Likewise, what I dislike might be enjoyed by someone else. I hope that you will be able to look at my summary and make up your minds about the game on your own.

Runewars is a game that I like very much, but falls into the “not right for me” category. The reason for this is not game play, but rather because it is a larger scale than I am after. At this point in my life, I am very happy playing Skirmish and low model count games. Anything 6 to 50 models a side seems to be my sweet spot. The army that I would want for Runewars would contain roughly 80 models at 200 points.

It would cost me just over $200 American to get to that point level (on top of the starter box). I am the type of person that would want to collect an equal sized force for the other side in case I ever met someone that wanted to try the game but owned no army. That would put my cash outlay to get fully into Runewars up to about $400 American for two 200 point armies. One could start with a cheaper option by buying a second starter set. That would give two 200 point armies for roughly $100 American over the first core box set.

Now lets be honest, $100 to $300 over the cost of a starter box is not terrible for a miniatures game army. It is fairly reasonable depending on what you are comparing the cost. That said, I would rather use that money to buy into, and test out, a few other rulesets.

The sales model for the game also makes me a little leery. The model looks similar to X-Wing and my forces in X-Wing are not competitive because I did not keep up with buying every miniature to get the best cards.

As far as game play is concerned, I like Runewars. It is a nice system that is fun to play and easy to teach. It is fiddly and I wonder at times if it is gimmicky with the dials, but it is effective and enjoyable. If you are an X-Wing fan, I think this would be a fair fantasy based replacement for that game. It is a little more complex with plenty of similar mechanics.

It will be very interesting to see where Runewars goes as new units are released.