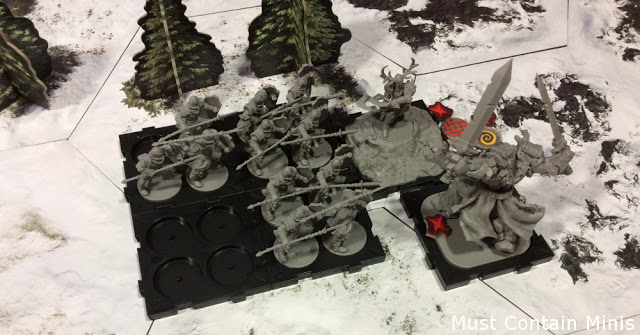 Recently, I played my first game of Runewars by Fantasy Flight Games.

Now let’s go back to the start of this action. Before this final (and desperate) fight, we had both sides set up the board. The box comes with some area terrain, but chose to use some other terrain instead.

For the mission, we went with the complete and total elimination of the enemy’s army.

Below is an image of how the field looked after deployment.

Once you deploy, you use the dials to “program” what each of your units will do for the round. On the left side of the dial is the action and to the right is the bonus or adjustment to make to that action.

After the actions are “programmed,” players go through the action dials in order from low to high. In this game, both sides advanced their forces right off the top with the Daqan Cavalry rushing in perhaps a little too quickly.

On the other side of the table, the Human Leader (Kari) takes a shot with her bow at the Carrion Lancer but fails to damage the creature.

Back to the other side of the table and the Cavalry charge the enemy.

Over on the other side of the table, the Daqan Cavalry continue to push hard into the Waiqar Archers.

On the next turn, my Cavalry mopped up the Archers and the Waiqar Hero (Ardus) slams into the rear of the Cavalry.

At this point, the game is not looking good for the Waiqar. At the same time, I was a little nervous because my Cavalry was near dead.

The Heroes in this game are super strong and durable. The two exchange blows and eventually Ardus defeats Kari. Not to give up, the Spearmen and Golem charge in on Ardus!

The Daqan win this hard fought battle. Near the end, when I had three units left to my opponent’s one, I thought the game was mine. The degree to which victory changed during the last rounds of the game surprised me. Ardus is truly a monster in hand-to-hand combat. He bested Kari, killed my Golem, and eliminated my Cavalry. He took out every unit in my army except for the Spearmen.

Overall, this was a fun battle and I like how the rules work. For those wondering, the terrain I used for this game are TerraTiles by RAINN Studios. The Blue Rune Star in the middle of the board looks great for Runewars, but is a Kickstarter exclusive – it is not in the retail version of the box.

Special thanks goes out to Asmodee for sending me Runewars. I plan to publish one more Battle Report of the game before posting my review.