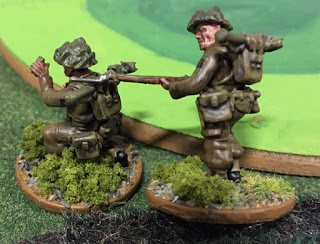 Today’s post is a reflection and general discussion of Bolt Action in my Area. Last night I went to my favourite local gaming store in Cambridge, Ontario, Canada, and I was really impressed with what I saw.

11 Bolt Action players were at the store. Not bad at all. I do my best to get to this store one to two times a Month to get in a game. In the past, there were usually 2 to 3 players when I got there. On a good night we would have 6 players all there for Bolt Action. Last night, there were 11. That is awesome!!!

Like many, I use the store as a social venue as well as a hobby and gaming location. The group at Forbes Hobbies is fairly relaxed and laid back. Most of us hung out and chatted rather than diving into a game. To be honest, we have more terrain to build for Bolt Action to enable more simultanious players. No one wanted to play Bolt Action on a 40K table. At the 28mm WW2 tables were 4 young adults / teenagers enjoying the game. It is really encouraging to see younger players getting engaged with Bolt Action. One of them even had tulips on his Sherman. I don’t know if the Tulips have rules yet, but they were cool to see.

While they played, us others chatted. One of the big topics was Konflikt ’47 and what everyone thought of the concepts regarding the game. This store (Forbes Hobbies) is very well stocked with Konflikt ’47 products and I would love to get a chance to try my Bolt Action Brits out against someone’s Konflikt ’47 army. I don’t mind crossing over and trying out the game that way. The German Starter army for Konflikt ’47 looks awesome and the Americans look even better. It will be really interesting to see what models are in the Konflikt ’47 British and Russian Starter Boxes. One friend, wanting to start a Zombie Horde right away, asked me about sending him a scale comparison between Mantic Games Zombies and Warlord Games Bolt Action Figures. I did a post in response to that Zombie Request last night in case others on the Internet were interested in the same question.

Aside from Konflikt ’47, we also chatted about an upcoming event that is extremely exciting. Council Fires 2016 is currently looking for Game Masters to host tables at a Convention in Brantford, Ontario, Canada for October 21 to 22. Council Fires is looking to fill up to 100 tables with games. If you are interested in hosting a table, please get in touch with them. I plan to go for the 22 to attend the Bolt Action Tournament. After the youngsters finished up, Dave and I took a table for a 500 point game while some of the others built terrain for the upcoming tournament.

If you are in the Cambridge, Ontario area, check out Forbes Hobbies. They have a great inventory for both Bolt Action and Konflikt ’47. For those closer to London, The Game Chamber also heavily supports Bolt Action. It would great to see the local gaming community keep expanding.