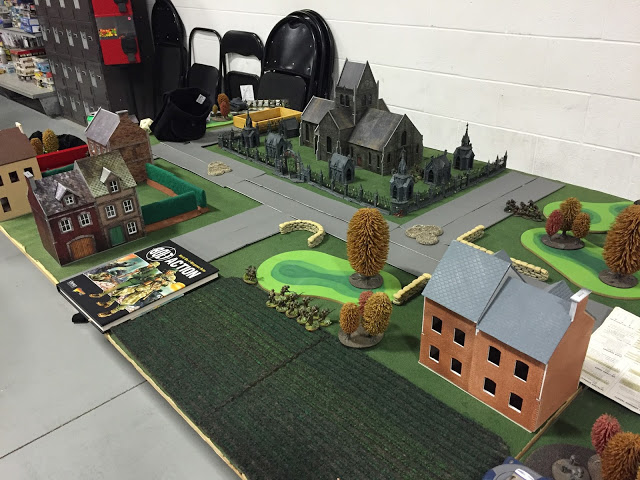 On Monday night, I got in a small game of Bolt Action with my friend Dave. The table was set before we got to the store, but we added some sandbags from my collection for extra cover. For mission, we chose Maximum Attrition.

For Forces, I played the British and Dave the Germans.

It is interesting that both sides chose to bring a vehicle to a 500 point game. The Otter posses a good threat to infantry with a turreted lmg and minimal threat to the tank with a hull mounted +2 Anti-tank rifle. The Panzer posed just a little bit more of a threat to the Otter with heavier armour but still just a +2 bonus to penetration with its main gun. The British did not realize at the time, but this panzer would pose a serious threat to his infantry as its HE round roll a d6 with +2 penetration. The effectiveness of the light howitzer was learned during the game when it opened fire on some British infantry.

It would have been nice to finish the game, but we got distracted talking about an upcoming Bolt Action tournament this October at Council Fires. If the game continued, the Brits would have turned around the Otter to fire at one of the German Infantry squads, assaulted the Panzer with the nine man squad (all equipped with Antitank Grenades), and peppered the closest Infantry squads with bullets using the remaining three units. It looks like the Germans were setting up to assault the British troops. and they were hoping to pull the Panzer up to take a rear shot at the Otter. At this point, I think it could still have been anyone’s game. In the end, each side killed one unit – so the game concludes as a draw.
Happy Gaming Everyone!!!
Tags: Battle Report, Bolt Action, Forbes Hobbies

Combining Conan with Frostgrave: Painting Up Conan The Boardgame (by Monolith)