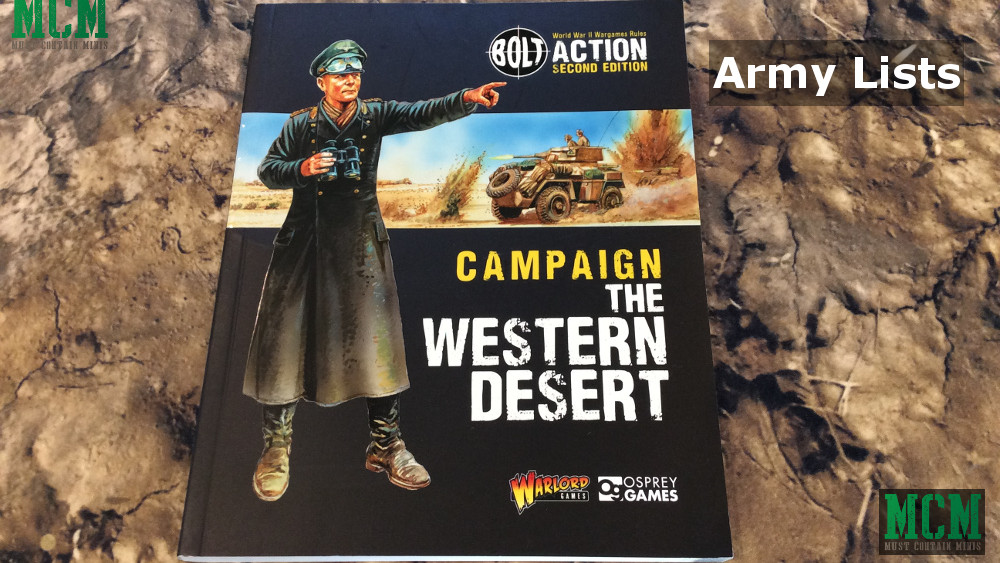 I don’t know about you, but one of the things that I like to do when I receive a new book is to check out the new army lists and units within. In this post, we take a look at some of the army lists in Bolt Action: Campaign: The Western Desert.

Before discussing the lists though, I want to let you know that I am very impressed with this book. Coming in at 168 pages, it is the biggest campaign book that I have received to date. Reading through, I am happy with the amount of history presented and the scenarios in the book.

In the Interest of full disclosure, Osprey Games sent me Bolt Action: Campaign: The Western Desert for review purposes. Thank you very much for that.

Also… Aside from the title image above, all images in this post are from Warlord Games’ Website.

Now for some history about myself.

When I first encountered the game Flames of War, I really wanted to collect a Desert Army. The desert armies caught my eye because they were so different from the World War 2 history that I knew at the time. I knew about the end of the war, but not so much late or mid-war. What caught my eye the most about the desert units was the SAS jeeps and trucks of the Long Range Desert Group (LRDG).

I never did get to start that collection.

Now I see Warlord Games putting out this their Desert War models for Bolt Action and they have my interest. I want to build a LRDG army. The desire is there – time and funds might be a different matter though.

Let’s take a closer look at the armies in the new Bolt Action: Campaign: The Western Desert.

The armies in this book are intended to be balanced against their counterparts in the same book, but they are also intended to be somewhat balanced for Open Play. As such, you will find that some of your raiding patrols can grow larger in size than what may have been historically accurate. I am okay with that.

While it should be somewhat balanced for Open Play, I will keep in mind that if you take a group of six jeeps with no real anti-tank assets against a late war platoon, it likely will not end well.

One thing I noticed about the force selections in this book is that they are different than in the others. There seems to be more of a leaning to mobile forces here.

Typically, your armies in Bolt Action follow the formula of 1 Lieutenant, 2 Infantry Squads, 0-4 extra Infantry Squads, 0-1 for each Special Weapons Team, 0-1 Artillery Guns, 0-1 Armoured Cars, 0-1 Tanks and whatever Transports you need. This book breaks away from that formula. There are still armies that follow it, but there are also many armies that do not.

These changes in the formula add to my excitement for the book. The nations in The Western Desert includes… Britain (and the Commonwealth), Germany, Italy and the Free French. In this post, I am going to focus in on the British and German lists as these are the nations that I play.

Britain and the Commonwealth is my nation of choice when I play Bolt Action. As I mentioned above, there are a couple of lists each for the LRDG and for the SAS in this book. Australian, South African, New Zealander and Indian Armies receive separate optional National Characteristics that can be taken in the place of the regular National Characteristics if you wish.

Aside from LRDG and SAS forces, the book also contains Infantry lists, and a number of mobile lists. Some of the mobile lists focus on the Rolls-Royce, Morris CS9 and the older tanks from this period of the war. My personal favourite for the desert tanks is the Grant. By the way, Warlord Games released a new plastic set of infantry to go with the campaign. A picture of the British 8th Army Sprue is below.

Some of the lists even let you take an extra 25-pound gun if you take an artillery selection. Pretty cool in that you can get a lot of guns to the table.

Now, let’s focus in on one of the Long Range Desert Group lists. This is one that I would love to build.

This list can take a little more work yet, but it gives you 6 Trucks, 1 Jeep, 2 Infantry Squads and a Mortar Team to bring to the tabletop. Against a similar force or infantry platoon, it should do well. Versus a tank platoon? Good luck!!! There is nothing here aside from a .50 Caliber, an Autocannon and Anti-Tank Grenades with any penetrating power.

Regardless, I think this would be a cool list to play and get to the table.

Now, let’s take a look at the Germans.

Like the British, the Germans also receive a new plastic infantry kit for The Western Desert.

There are some really interesting lists in this book for the Germans. My favourite is the DAK Anti-Tank Gun Platoon. This Force Selector will be a nightmare for any tank commander to encounter. There are two of these lists, and in them you can take up to 4 Anti-tank guns (2 of them can be 88mm Flak Guns), up to 3 LMG Teams, 1 Amoured Car, 1 Tank and 1 Infantry Squad. All Infantry and artillery needs transports though. This list can really shake things up for a different type of game.

The Germans have access to a number of mobile lists and can generally take tanks up to Panzer IIIs and IVs.

Overall, these are pretty interesting lists and I would really like to give them a try some day.

So far, I have been really enjoying Bolt Action: Campaign: The Western Desert. There are some great army lists in here. As a heads up, most of these lists are mobile and you need to have transport options for each of their infantry squads and artillery pieces. That said, there are also lists that do not need transports.

The history and missions in this book are also so far pretty good, but I have not yet completed reading them.

Hopefully you enjoyed this quick discussion of Bolt Action’s The Western Desert.

Just a reminder to the readers of this website, you can help support Must Contain Minis by buying products through our Affiliate Links. We have affiliations with DriveThruRPG, the Wargame Vault and Amazon.

If you buy from any of these sites after following a link from this site, Must Contain Minis gets around 5% of the purchase value to help fund the site.

Thanks for your continued support!