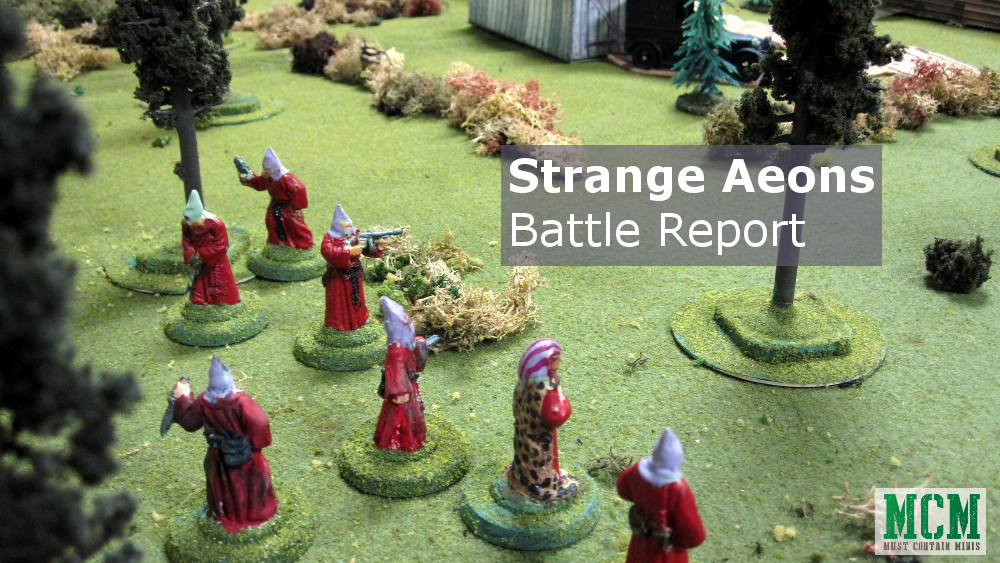 For a long time, I wanted to try out the game Strange Aeons. Sadly, every time I saw it at a convention, it always filled before I got to the sign up sheet. I finally got to try out the Strange Aeons (version 2) at Broadsword 5. This post is a Battle Report of that game.

Lembit Tohver acted as the game master for this demo and I had a fun time giving it a try.

I wrote about Von Unaussprechlichen Kulten before.

As a quick note, the Strange Aeons 2 game is the same gaming engine as what Von Unaussprechlichen Kulten runs on. How anyone remember the name of that game, I do not know.

What I played at Broadsword 5 was Strange Aeons 2. If you are interested in either game, be sure to check out the Strange Aeons’ Website.

In this demo game, every player (there were four), got a different gang of cultists. The abilities and spells were slightly different between the groups. Below is the group that I lead.

In this group, I had a Magus (who knows mysterious spells), a Leader (armed with a pistol), and five cultists. Two of those cultists carry pistols, one a hunting rifle, one a shotgun, and one unfortunate soul brought just a knife to this gun fight.

The other groups were similarly armed with some differences. One group had mutations already from their dark god. Another had a priestess with more powerful spells than my own. It was nice to see that the groups were evenly matched yet different in this demo game of Strange Aeons.

The mission in this battle was simple. Enter an abandoned farm under the cover of darkness, find some ancient artifacts to help your cult communicate with the dark gods of Cthulhu and get out. Your leader and Mage had to survive and you lost points for losing people. You also had to be off the board after a set number of turns.

The table looks pretty good and shows that you can get a really good effect with paper terrain.

To start, my group gathered in the woods under the cover of darkness. Unannounced to them, three other cults would come to the same abandoned farm in search of artifacts for their dark gods. Those gods are most likely connected to Cthulhu of course, but all the groups worship in their own ways.

With my main character almost completely taken out at the top of the game, I was wondering if it would be time for me to find another gaming table to get in on another game. Fortunately for me, things improved from here.

The yellow Priestess possesses awesome powers and proves herself a force to be reckoned with (even on her own).

Notice that the yellow group made their way to the chicken coups in the backyard of the house. The blue cult moved along the board undetected to the others (remaining out of line of site). Their location, the chicken coups. Why would their be Cthulhu related items in a chicken coup, I do not know – but that was where they were searching.

My group mostly stayed out of site and searched for artifacts in the garage in car. We tried starting the car, but it would not work. My guess is that it was out of gas. We found a couple of objects. Due to heavy fire (and fear), my group never left the safety of this area.

The blue cult and mutants also found a number of artifacts in the house and barn.

Meanwhile, yellow focused more in engaging in battle rather than finding objects. I don’t even know if yellow found any artifacts, but in the end yellow won because they were the only group to clear off the board in time. Their Priestess and Leader also survived the ordeal.

My group did not clear off in time and neither did the other two factions. Congratulations to yellow!

Everyone paints at different abilities and I really like seeing painted miniatures on the table. Lembit’s collection features the official miniatures for Strange Aeons. These are minis I had not seen before and I wanted to include some close up shots of those miniatures in this post.

Playing new games is something I always enjoy. I just love going to local conventions like Broadsword and getting in on a participation game or two of games new to me. Special thanks goes out to Barnaby Ore for organizing the Broadsword Events and to Lembit Tohver for allowing me to take pictures of his minis and trying out this game.

By the way, great table Lembit. Love your use of paper houses and scatter terrain to make up a really nice looking board.

Just a reminder to the readers of this website, you can help support Must Contain Minis by buying products through our Affiliate Links. We have affiliations with DriveThruRPG, the Wargame Vault and Amazon.

If you buy from any of these sites after following a link from this site, Must Contain Minis gets around 5% of the purchase value to help fund the site.

Thanks for your continued support!