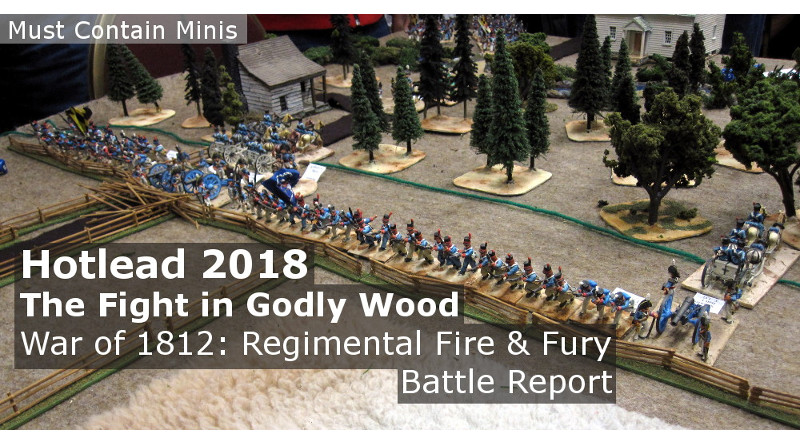 At Hotlead 2018, I got a chance to try out a game of Regimental Fire & Fury. This is the Battle Report of that game.

This was a game for two to eight players. Six players showed, so the breakdown was three players per side.  I played as one of the British commanders.

“Eye-candy” pictures of the miniatures from both sides of the battle are at the end of this Battle Report.

Below is the game description from the Hotlead 2018 Website…

As far as background, we were given a little more than the text above, but not too much. Each side broke off to discuss their plans.

The Plan of Attack

Our group came up with a simple plan, which to us seemed obvious and sure to work. With a total of four sections, we decided to advance three of them straight onto the enemy while outflanking them with the fourth. The Americans planned simply to brace for impact and hope for quick reinforcements.

We rolled initiative and the British went first.

Below is a quick look at the American positions the British needed to breakthrough.

With no fear, the British advanced. In Regimental Fire and Fury, you roll for your command ability each turn. That roll determines what orders and distances you can move for the turn. Unfortunately for me, my rolls were pretty bad so my flanking troops moved slower throughout the game than they should.

Although our approach did not end as we hoped, we had to charge. If we did not, the enemy’s reserves would soon arrive.

The Americans form up faster than expected and the British start taking heavy losses.

The middle units sustain heavy loses and my forces take their turn at the charge! Notice that the unit beside me has been pushed back and is in disorder.

The Downfall of the British

At this point, it was all or nothing and the British Casualties started piling up.

While the center line pulls back, my units push forward trying to achieve a flanking maneuver.

The Americans end this Battle Report as the victors. While the Americans hold in this alternate version of history, in the real history, the American forces retreated after inflicting heavy casualties on the British. If you want to know more about the actual history of this encounter, research the Battle of North Point.

As promised, check out the “eye-candy” pictures of the battle below.

Overall, I had a lot of fun playing this game. Eric Ritchie did a good job of introducing six new players to the rules of Regimental Fire & Fury (by Fire and Fury Games) and I got to learn a little bit about History in the process. Normally, this is a game I would have never been able to play if it was not for great local gaming conventions like Hotlead. It is really something special to be able to go to one of these special events and try out a large number of different games on great looking tables.

After the game, Eric briefed us on the events and let us know that we tried to tackle the problem in a similar way to how the British army did back in the day. They also went for the open field and hoped for a flanking maneuver and were slowed down by a swamp. It shows that it is all the more important to actually scout the land before pressing your attack.  🙂