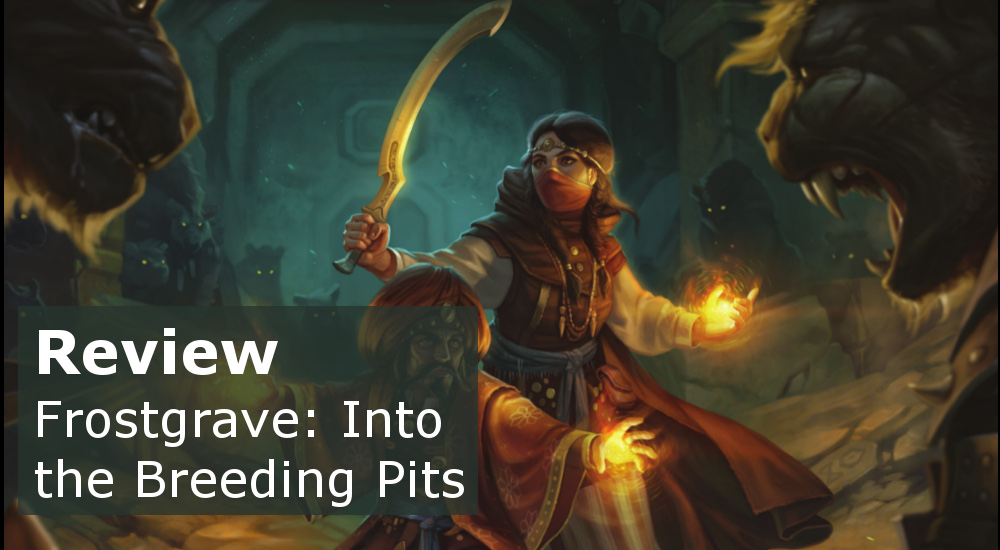 When Osprey Games published Frostgrave, they put out an excellent product. Into the Breeding Pits is their second expansion to Frostgrave, and this post is a review of that book. I purchased this book sometime ago at a local convention.

Into the Breeding Pits

Into the Breeding Pits introduces several new elements into Frostgrave. These elements include rules for underground exploration, traps, new spells and scenarios.

Whether above ground, or in the Dungeons, this book gives rules on doorways, ceilings and darkness. It also introduces the concepts of traps. Traps add a lot of randomness and fun into the game.

A trap gets set off if someone rolls a “one” for initiative. This also acts as a balancing mechanism of some sort as rolling low means that you will not usually go first in combat. Below is a sample page out of the trap section of the book.

As you can see, these traps add something different to the game. The person that springs the trap gets to choose the figure that it springs against. You then roll a d20 against a chart and use the trap listed with that number. The result often makes for an interesting story and lots of laughs around the table.

Some of the traps are effective, some are ineffective, but they are all potentially bad to the target. If you want to use traps in Frostgrave: Ghost Archipelago, there are rules for traps in the second issue of Spellcaster Magazine.

There are also rules for finding secret passages. Unlike traps, these are set off when someone rolls a natural 20 for initiative. This boon allows the player to move a figure through “dead space” and walls in caves and dungeons. It is a neat way to gain some extra movement.

This book comes with new spells and a new advanced Wizard type – the Beastcrafter. The Beastcrafter class allows the Wizard to better Control Animals and to have more Animal Companions in their warband. If they take the Beastcrafter class far enough, they can pick up one animal trait to help them in their adventures. I honestly like this Wizard Class more than the option of Forging Pacts with Demons in the Forgotten Pacts book, but everyone will have their own opinion on which is better. The Beastcrafter option is best suited to Witches (due to its reliance on Animal Companions), but could be taken by any Wizard.

Into the Breeding Pits brings five new scenarios to the game. In one scenario, you are in a Dungeon where the walls keep moving. In another the caverns are hit with a massive influx of water that moves around treasure and figures alike. There are also the three other scenarios that I have written Battle Reports for on this site. Those scenarios include…

For these scenarios (and others in the Into the Breeding Pits setting) there are modified rules for Random Creatures.

Like all the other books, Into the Breeding Pits contains new Magic Items and Bestiary. Some of the cool new treasure items include Armour for your Bear Companions, an Iron Collar for one of your Canines (a good excuse to model armour on a Dog / Wolf miniature) and the Book of the Bone Binder (which makes it so your Zombies don’t crumble apart between missions). For bestiary, there are Hyenas, Minotaurs, Hydras, Devourers and Gnolls. Of course there are more new creatures, but I am not going to mention every single one of them.

The description and art work for the Gnolls I found especially interesting. Below is the write up of how Gnolls came to existence in the Frostgrave world.

When the Gnoll miniatures came out there were a lot of people that really liked them, and a lot that did not. I fall into the category of those that like them. I do not currently own any in my collection as funds are limited, but I really like the artwork and direction that they took on these figures. They are exactly how I envisioned Gnolls back in my early days with Dungeons and Dragons.

What do you think of the Frostgrave Gnolls? Let us know in the comments section below.

This quick review is a write up of what players can find in the book Frostgrave: Into the Breeding Pits.

I personally really like the book and even used a Beastcrafter Wizard as a playable Warband in some of my demo games of Frostgrave. The rules add new dimensions to the game and are perfect for people that want to reuse their 2D and 3D terrain from Dungeons and Dragons (or Pathfinder or whatever other RPGs they play) in a Miniatures Game. The traps took a little bit of time to grow on me, but eventually I found myself using them in games outside of the Dungeon for some crazy antics.

As with most of Osprey’s Miniatures Games, the price on this book is hard to beat and in my opinion, the quality is well worth the price.

Hopefully this quick look of Frostgrave: Into the Breeding Pits will help you decide if you want to add this book to your collection.

If you like our site and want to support what we do, you can help by purchasing items through our affiliate links. If you do, a small portion of each purchase will go to helping us make more content for this website.

Frostgrave is available through both Amazon and DriveThruRPG.

If you prefer PDFs, check out the files on DriveThruRPG.

DriveThruRPG is also excellent if you are after very affordable Paper Terrain for your wargames.

Memoir 44 – The Perfect Game for the Holidays

How I Used The Army Painter on my Enlightened