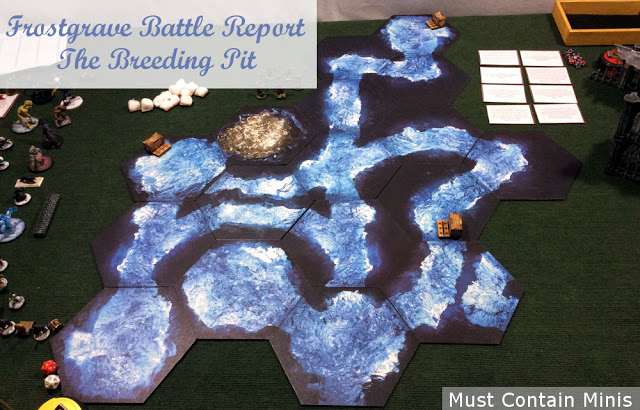 A while ago, Dave, Randall and I played a three game campaign day of Frostgrave: Into the Breeding Pits. This Battle Report is of our second game.

Just as in our last game, we used the TerraTiles: Tundras and Wastelands set as our terrain. This time, we used the tiles as a dungeon. Here, we used three stair cases and one cave entrance (front middle of the picture) as the entrances and exits to the dungeon.

We used the same warbands as the last game with slight improvements to our stats and spell casting abilities. The scenario we played this time was “The Breeding Pit.” In this dungeon based scenario, new wandering monsters appear every round. We house ruled, as in the last game, that the Crumble Spell could create entrances through the cave walls to other areas. We played with all of the optional rules.

As far as treasure layout, we set up the treasures as below. Each red dot on the map represents a treasure. One of the three treasures on the left Dave created with a Reveal Secret spell.

For a refresher, below are pictures of the warbands from our last adventure.

Now back to “The Breeding Pit.” Below is an image of the agreed upon deployment zones.

Right off the top, the Undertaker was very aggressive. He sent his first group out for the treasure immediately to his left and cast Crumble on the nearby wall to create an entrance to the treasure on the bottom left (in Beorncrom’s area). On his Apprentice’s turn the Apprentice cast Crumble on the cave wall in front of him to create an entrance to another area of the caverns.

While the Undertaker goes for the closest treasures, so to does his opponents.

The Undertaker proceeds into Beorncrom’s area and finds his split force over-powered. Beorncrom and the Undertaker make a pact to call off the fight and to allow Beorncrom to take the three treasures in his area.

Having conceded the bottom left treasure to Beorncrom, the Undertaker doubles his efforts to take the treasure in the middle of the table. Meanwhile, a new monster enters the board every round. The first (and only) casualty of this game is the Undertaker’s Zombie near the centre treasure.

With so many creatures in the middle of the table, Sister Beatrice decides not to make a move on a second treasure. She instead withdraws her warband with just one treasure. Sadly, a Snow Leopard enters the battle right in front of her exit.

All three of the warbands exit the map without much fighting. There were no casualties (aside from a single, throwaway, Zombie in the Undertaker’s warband). In fact, there was almost no player-on-player conflict. Sister Beatrice stayed out of the battle while the Undertaker and Beorncrom reached a truce. No side took a casualty (the Zombie does not count).

While there was limited player-on-player battles, the game system itself challenged the Undertaker’s warband specifically. Both Beorncrom and the Undertaker make it off the board with three treasures a piece. Sister Beatrice was happy to exit with just one treasure without any incidents.

Overall, this was yet another fun game of Frostgrave. The players spent their experience to level up a couple of stats and better their spell casting. The Undertaker specifically took another level in fight and learned Flash (figured it made thematic sense since he is carrying a lantern).

Having played so many games with combat oriented Wizards, I was finding it pretty refreshing to play with three “non-combat” focused wizards. The deadliest spell any of the Wizards has is Furious Quill. Although there were no casualties in this game, the same would not hold true for the next…

Other Articles of Interest…

or DriveThruRPG. Must Contain Minis has affiliate links to both and if you purchase from either of those stores after using one of the links on this site, a portion of the sales goes to supporting Must Contain Minis at no extra cost to you.

Must Contain Minis has a Sales Affiliate Relationship with Amazon, RPGNow, DriveThruRPG, and the Wargame Vault. This article includes affiliate links. If you visit them from one of the above sites with a link through this page and make a purchase, a portion of the sales goes to supporting Must Contain Minis at no extra cost to you.