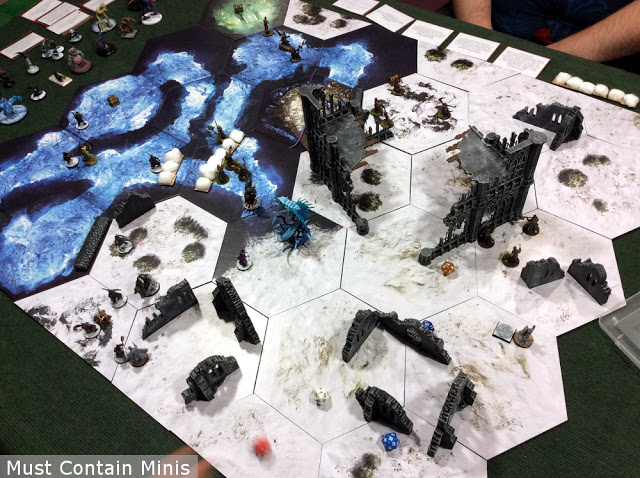 Recently, Dave, Randall and Jacob got into a three player game of Frostgrave. For this game, they played the Mating Season Mission of Into the Breeding Pits. Below is a picture of the table in play.

In Mating Season, three Giant Devourers look to mate. They are peaceful creatures until anyone of them are injured. At that point, all three monsters become hostile and will attack the closest warparty. For Wizards just starting out, these monsters would prove to be more than a match.

Below are our warbands.

On thing that I like and was surprised by was that none of the players took attack focused Wizards. The Undertaker didn’t even take the spell Bone Dart. Crazy!!!

Below is a picture of the table before the start of the game. For this mission, we had the left side of the table as a fairly open winter ruins scape, while on the left we have a cave system.

We ruled that “thin walls” of the caves could be breached using the spell “Crumble.” We also used the optional rules for traps. Good or Bad, Dave rolled a lot of ones for initiative – giving him the ability to spring a lot of traps on the other players.

We also ruled that the cave had two natural exits. One at the mouth of the cave in the middle of the table and the other in the top right (picture above) where the cave exits the map. Before starting the game, we placed treasure. Only two were placed on the snow part of the board. The rest would be in the caves.

The players then determined their starting corners. None would start in the caves.

We deployed our forces and smack dab in the middle of our deployment zones would be a Devourer. 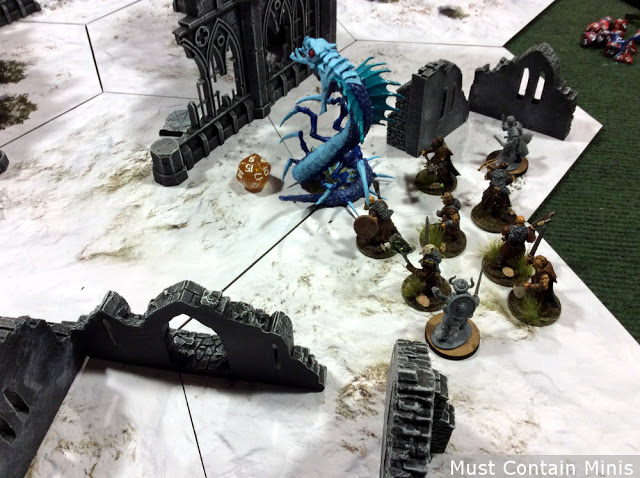 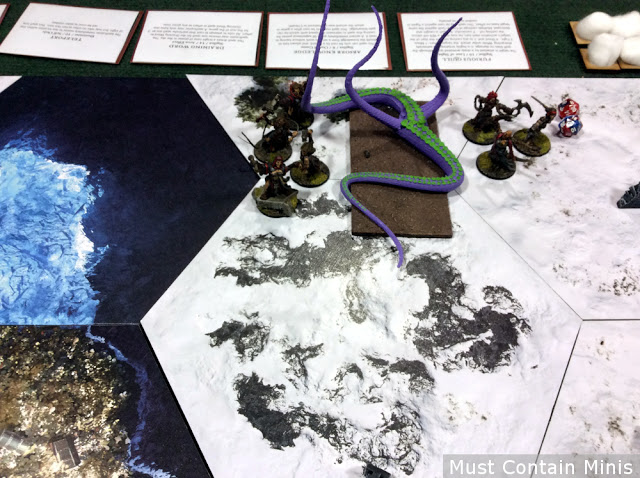 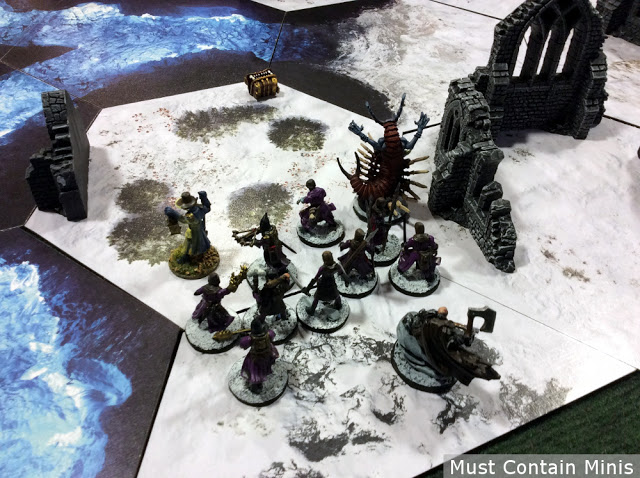 We all joked about being the first to attack a Devourer, but no one had the guts to actually do so. Both the Undertaker and Sister Beatrice started the game by trying to create new entrances to the cave system with the Crumble spell. Neither succeeded on the first turn.

During round two, all of the players enter the caves. Beorncrom was already in the caves, but without support. His soldiers continue to march into the cave entrance. Sister Beatrice casts Crumble and moves half of her force into the caves. The Undertaker also enters into the caves but much more tactically.

Beorncrom rolls a one for initiative and chooses to spring a trap on the Undertaker’s Marksman. An axe springs out of the cave all and is stopped by the Marksman’s armour. That was close!!!

The Undertaker continues to proceed very tactfully. He has two thieves making off with treasure and a wall of soldiers protecting them. He casts Fog to obscure the actions of his force.

Beorncrom would not let the treasure go without a fight. His Assassin makes it close to a Treasure Hunter but is met by a Templar. Dave learns, out of game, that it is not a good idea to take a character meant to gain up against targets into a fight without support.

The Templar smashes the day lights out of the Assassin.

At the top of the round Beorncrom rolls another one for initiative. He targets the Marksman and a pit appears under his feet. The Marksman manages to jump out of the way. In future pictures, that pit is represented by a white business card. Why do all of the traps keep picking on this guy!!? Better him than my Wizard!

The Marksman activates with the Wizard and takes aim at one of Beorncrom’s soldier. Snap, the soldier suffers a fatal shot from a crossbow bolt!!! At the same time, the Undertaker casts “Bones of the Earth” on the soldier that took out the Javelineer.

At this point, the Devourers reach the breeding point and begin with what comes naturally. Satisfied with his treasure haul (and experience earned), the Undertaker starts to flee the board and so too does Sister Beatrice’s warband.

This is pretty much how the battle ended. From this point, the forces of Sister Beatrice and the Undertaker exit the table while Beorncrom tries to cause some damage to both parties as they exit. No real damage is caused and the Undertaker’s warband is the big winner of the day. Sister Beatrice (who was allowed to roam the board without much opposition) also pulled in a good haul of treasure.

What a fun game this was. We had an awesome time playing on this board and got in two more battles for future Battle Reports.

For those looking for more reading, below is a list of Reviews and Showcases of Products used in this Battle Report.