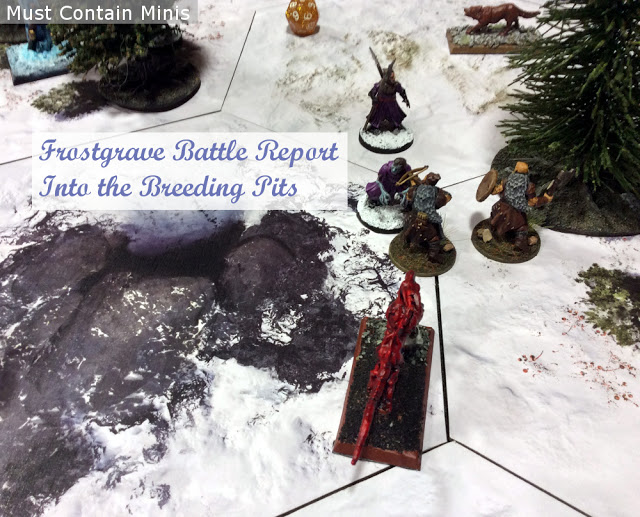 In this game, we used all of the rules from Into the Breeding Pits and played the scenario “The Rats in the Walls.” In this scenario, rats spawn whenever a treasure is picked up (rather than rolling for Random Encounters).

Above is a picture of the game in play, but let’s wind back to the start.

To begin, we set up the table very generically using TerraTiles. There are rivers on the table, but we played those rivers as standard terrain with no effect on movement. This is the most open table on which I have ever played Frostgrave.

This Battle Report is the third from a three game campaign day that Randal, Dave and I played some time ago. We used the same Warbands, yet again, and the links to the previous games are below.

As with the previous games, Randal played a Sigilist (Sister Beatrice), Dave played an Illusionist (Beorncrom the Quick), and I (Jacob) played a Necromancer (the Undertaker). From the previous game, we improved our Wizards and spells, but made almost no changes to the warbands. The biggest change of note is that the Undertaker invested in Kennels and bought a War Hound.

We placed treasure around the table and then diced off for deployment. For the zones, the Undertaker deployed in the middle tile at the bottom of the board, Beorncrom deployed on the middle tile to the left and Sister Beatrice deployed at the top middle tile of the map.

Obviously, my thieves would make a rush for the closest treasures.

I must say it is a lot of fun and an interesting challenge to play a game were none of the Wizards took effective attack spells. Here, Sister Beatrice uses her deadlieset attack spell (Furious Quill). Furious Quill causes a magical feather pen to materialize and attack the target by tickling and annoying the enemy.

If we had of taken a lot of attack spells, an open table like this would be suicide for all that venture forth to collect its treasures.

Meanwhile, Beorncrom is in a terrible situation. He is under the influence of Furious Quill, too close to Sister Beatrice’s warband, and, to make maters even worse, the Undertaker’s Apprentice cast Bones of the Earth on him. Bones of the Earth creates skeletal hands that grab the victim and keep the victim in place until they are destroyed.

In the next round, Beorncrom is almost killed and concedes his treasure to Sister Beatrice so he can escape with his life.

This time around, there were a lot of deaths around the table. Many of the soldiers that went in, would not make it out. The Undertaker spent most of his gold at the end of the game just replacing the people that he lost.

Overall, this was a fairly fun game and a neat way to end the night. The rats weren’t too tough, but if you don’t get the right rolls, they can be deadly.

It will be a lot of fun to continue on with this campaign in the future.

If you want to help support Must Contain Minis, be sure to check out the links below. We have affiliate relationships with Amazon, Wargames Vault and DriveThruRPG. If you buy from one of those webstores after using the links on this site, a portion of the sales goes to supporting Must Contain Minis (at no extra cost to you).