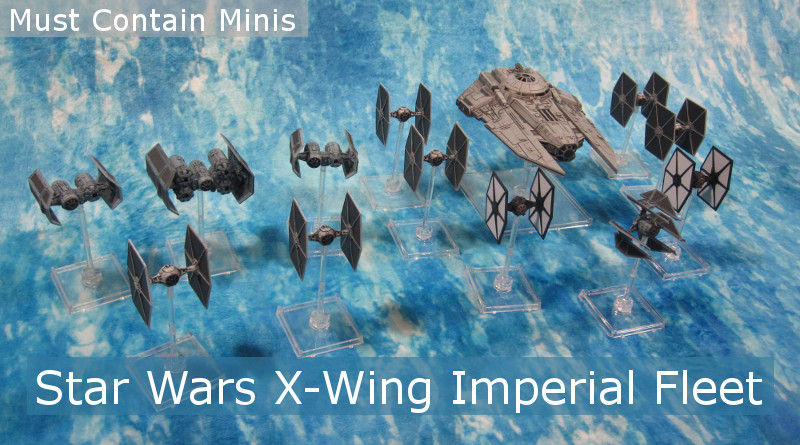 In this post, we take a look at my Imperial Fleet, or, at least, what was my Imperial Fleet for the X-Wing Miniatures Game. Since then, I sold off this collection to help generate funds for photography equipment.

When I started collecting X-Wing, I focused on my Imperial forces. That was my army of choice whenever I played a game, be it casual or tournament based. The game itself is really good and if you want to know more about my thoughts on the game, check out my post about my Rebel Collection (also since sold). Although I sold off my collections, I took a number of pictures of the models before doing so. This post contains many of those pictures. If you like Star Wars, there is definitely eye-candy in this post for you.

As I stated earlier, my favourite force in X-Wing is the Imperials.

Generally, I liked running one large ship (like the VT-49 Decimator) with an escort of TIE Fighters.

Whether the Decimator is a better ship than the Millennium Falcon or YT-2400 Freighter is up for debate. I flew it because I liked the aesthetics of the ship. It also drew a lot of fire away from its accompaniment of TIE Fighters (typically three to four in a 100 point list).

This was my ship!!! Whenever I could, I took it in my games. I know that X-Wing is about the spaceships, but I really like this one!

This ship flies like a tank and acts as a mobile firing platform with a 360-degree arc of fire. You can take many upgrades too, but I seldom took them aside from crew-members.

The most basic fighter is the TIE Fighter. It is quick, agile and many of them can be taken in a force. It lacks shields and longevity, but as an Imperial player, you are hoping to use them in a swarm to overwhelm your opponent. Their numbers are their protection.

The TIE/Fo is a newer model of the TIE Fighter from the Star Wars Movie, The Force Awakens. Sadly, I can’t say too much about this ship as I barely used it in the game.

At first, I thought the two ships (the TIE Fighter and TIE/Fo Fighter) were the same miniature with different paint jobs, but, if you look really closely, the models are different too.

This one is another one of my favourites. With 6 Hull points, they held up surprisingly well in dogfights. I like the weapon options that these ships can take, but without the right cards, those ordinances cost too much to make their points back from. Still… It is a great looking ship.

This is one ship that I really wanted to own, but barely used once I added it to the collection. That said, it had a special ordinance card that I used to make my other ships better.

I am sad to say that the TIE Defender was one of my biggest disappointments in the X-Wing Miniatures Game. If you ever played the old PC game TIE Fighter, this ship was the best. In X-Wing: The Miniatures Game, this ship sucks!!! Its maneuverability is too predictable to any experienced opponent and it costs too many points for what it brings to the fight. Later, another ship set was released that made these ships better, but I didn’t want to spend more money on it just to get a few cards. If you are wondering what box set has cards to make the TIE Defender better, it is the [amazon_textlink asin=’B019HWSRZQ’ text=’Imperial Veterans’ template=’ProductLink’ store=’mustcontainmi-20′ marketplace=’US’ link_id=’364f799b-412a-11e8-ad36-97e84f8e8aff’] Expansion.

Hopefully you enjoyed this quick showcase of what was my X-Wing Imperial Collection. Personally, I think that the game of X-Wing by Fantasy Flight Games is fantastic. Unfortunately, my play-style did not fit with the local scene so my collection sat unused on the shelves for a couple of years. If you haven’t already checked out my Showcase post about my Rebel Fleet, take a look at it too. The pre-painted ships look great and photograph nicely. 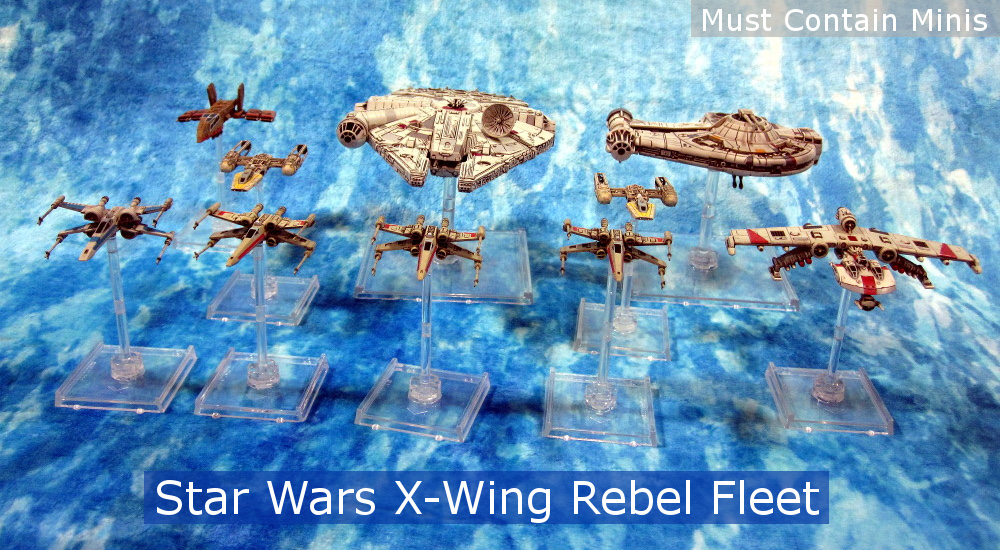 For readers wondering what I used as a background in all of the photos above, I used a Cigar Box Battle Plush Mat. Their mats make absolutely awesome backdrops for miniature photography and even better gaming surfaces for your battle tables. This one in particular is their #105 “Oceans” Mat and it reminds me of the atmospheric battle in Star Wars: Rogue One. Feel free to check out their online store. Their mats are really quite something nice!

Hopefully you enjoyed this showcase article of my Imperial Fleet for X-Wing.