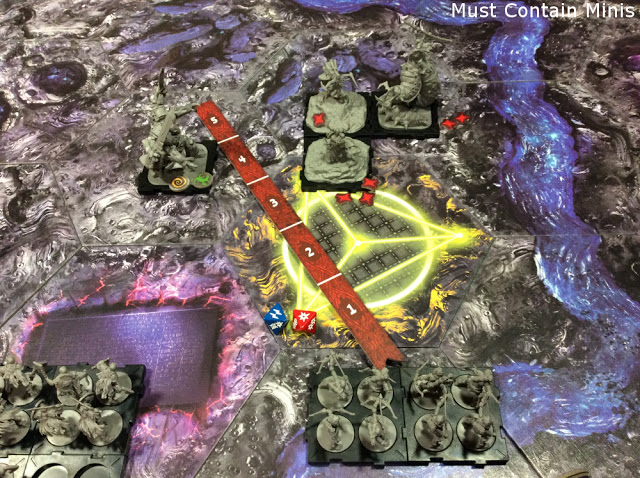 For my second game of Runewars: The Miniatures game, I switched armies and tried the Waiqar. Thanks goes out again to Asmodee for sending the core set to Must Contain Minis.

When we last played the game, we played with just the base units and no upgrades. This gives a slight advantage to the Daqan. Even so, the game ended close with the Daqan winning by just one unit. This time, we added in the upgrade cards and pointed out the armies so that they would be equal.

Deployment went similar to last time. As the Waiqar, I deployed my infantry block to the left with Ardus nearby and the Archers slightly behind him. A little further to the right, I deployed my Carrion Lancer with the intention to pull off a flanking maneuver. My opponent deployed on the far side of the table with all of his units in a line. The backdrop terrain on this battle are called TerraTiles. We used them as non-interactive terrain.

Off the top, everyone advanced their units quickly. We were both eager for combat.
The action would start strong in the second round.
The Cavalry strike back on the Reanimates and kill 3 of their units. The Carrion Lancer then charges in on the Spearmen.
To start the next round, Ardus proves how much of a monster he is in melee combat. He kills 8 Spearmen in one strike and then his Carrion Lancer buddy finishes the job.

Overall, this was another enjoyable game of Runewars.

In my first game, I played the Daqan, and in this one, I played the Waiqar. Both times I managed to win. To me, the forces seem balanced, but Ardus (Waiqar) and the Rune Golem (Daqan) are both monsters in close combat.

I hope that everyone enjoyed this Battle Report.