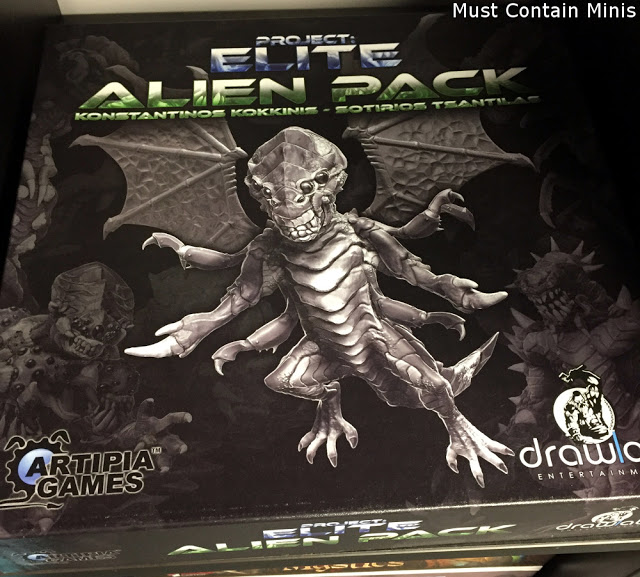 Now here is a game that I wanted to try for a long time, and I got to play it this weekend. My buddy James owns it (along with most of the expansions) and broke it out for his Birthday Party!

When James told me that this was the game that he would like to play, I was excited! A Miniatures Board Game… Check! A co-operative game… Nice! Highly rated by Tom Vasel… Fantastic! Great artwork… I am in!!!

Then James mentioned that it is a “Real Time Strategy Game.” In my mind, I was looking for my coat and walking out the door. I had terrible visions of playing “Perpetual Commotion” with my wife. I suck at speed based games! Since I was sticking it out, I gave the guys the heads up that I am not fast and might not do well at this game as a result.

I got to pick out my character and I will mention again that the artwork is really nice. I chose Bus.

Then I saw the miniatures… Again, I was heading out the door in my mind.

Seeing that Bus was not great in detail, I checked the other minis.

Back to the cards, I equipped Bus with a close-ranged Projectile Gun and a Rocket Launcher.

Overall, this was an extremely fun game. I was surprised with how much I enjoyed the game because I was very scared about the “real-time” component. For the duration of the game, I was standing and heavily involved. It is great how quickly and excitingly Project Elite pulls in its’ players. All around the table, everyone had a great time. James (the Birthday Boy), Kevin (the Boss), Jennifer and myself all celebrated in our victory!

I found that Project Elite plays with the feel of a Tower Defence game on a PC or Mobile App with objectives added. The enemies keep spawning and you have to frantically stop them from reaching and overrunning your bunker.

The heroes in this game are super-powered and can kill plenty of enemies a turn. While we did take some damage on our side, no-one died.

For me, this game was extremely fun, but it is not one that I would add to my collection. That said, if anyone ever asked, “who wants to play Project Elite,” my hand would be one of the first to shoot up in the air. This is a great game. I was amazed with how much I was drawn into the action and excitement. If my readers ever get the chance to try this game, I recommend that they test it out. I loved it!

Given the price this game is now selling for on EBay and the GeekMarket, I would recommend that only the most dedicated fans actually look into purchasing Project Elite. The last prices I saw were $200 for just the base game or $400 for the whole collection. Both of these were previously used copies. One could buy a lot of other games for that same amount of money.

I just saw that CMON plans to come out with a Kickstarter for Project Elite. If they follow through, there is an opportunity for those that missed the original game to pick up a similar version for a more affordable price. Also, the preview artwork they have posted already looks better than that in the original game and I bet the miniatures will be better too!