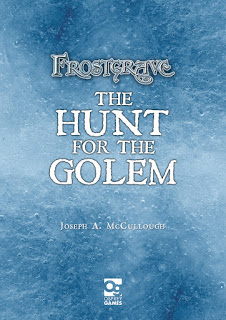 Being the first mini-expansion for Frostgrave, The Hunt for the Golem did not push the boundaries of what was established in the core rules of the game. Instead, this supplement gives a great campaign to play through and some new magical items. Personally, I really enjoyed playing through this campaign and have posted a complete Battle Report of the Adventure in an earlier post. There are five new magical items in this expansion and all of them relate to the construction of Golems.

This supplement I would recommend to any group with an Enchanter focusing on Golems. It was a lot of fun and I am glad that Osprey gave these smaller expansions a try.

I am really looking forward to Osprey publishing these PDF supplements in the upcoming Frostgrave Folio. This book is slated to have extra content in addition to the four previously released PDF Frostgrave mini-expansions.

If you are interested, be sure to watch North Star Military Figures for an upcoming promotion. They plan to do a Nickstarter type campaign with bonuses for pre-ordering the book through them.


The best way to get the Hunt for the Golem is through the Frostgrave: Folio book. It is also still available through various online services such as DriveThruRPG.