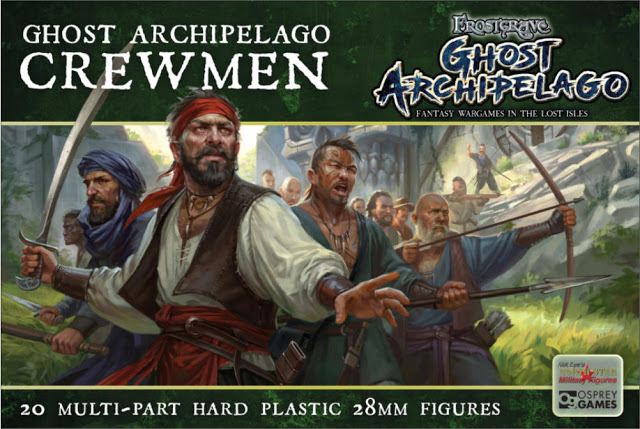 Osprey Publishing sent me an advanced copy of the rulebook, and, shortly after it arrived, I jumped ahead to read the options for crew composition. Today, I am going to look at the crews players can expect to take in Ghost Archipelago.

First off, in terms of crew (warband) members, the games are not equal. In the original Frostgrave, you can hire whomever you want whenever you want. If you want a warband with 8 knights, you can do that.

In Ghost Archipelago, that is not the case. There is a statistical equivalent to a knight (who counts as a specialist), but you are limited to hiring just 4 specialists in your crew at once.

The stats of a Standard Crewman are basically the equivalent to a Thug from the original game with the added bonus that you can choose his or her weapon. The weapon may be a Hand Weapon, a Two Handed Weapon, a Staff, or a Hand Weapon and Shield.

Notice that ranged weapons and armour are not part of the kit that a Standard Crewmember may select. To get those items, you need to hire a specialist or put the items on your Heritor. For me, this means that many of my higher level Frostgrave Warbands would not be allowed in this version of the game as I hired too many ‘specialist’ type characters. Depending how you look at it, this limiting of forces could be either a positive or a negative. From my perspective, it adds an additional balancing mechanism between low and high level characters that I like.

Another advantage of adding Standard Crewman to the game is that it allows a mechanism to always allow 8 members in a crew. In the original game, if you had a few warband members die and could not afford to replace them, you had to play the next game without them and hope that you make enough gold on that next mission to hire whom you need to replace. This problem gave a big benefit to other warbands that kept their characters alive. In Ghost Archipelago, you never have to worry about that problem.

Standard Crewmen are always present. If one dies or is taken out of action, there is another crew member on your ship willing to take his or her place. Likewise, if a Specialist dies (or is taken out of action for a battle), a standard crew member is more than happy to take their place until you are able to go back to port to hire another specialist (or when your specialist is healed). A nice little game balancing feature if you ask me.  🙂

For specialists, most of the warband member options from the original game are present with new names, plus there are some new options like the Pearl Diver (who is amphibious) and Hunter (who receives a fight bonus vs Animals).

Using the optional rules in the first issue of Spellcaster magazine players can add specialists even more specialist options. The specialists that magazine brings to the game are armed with muskets, blunderbusses and pistols. While these black powder weapons are not a part of the official Ghost Archipelago setting, I fully intend to use them for my games.

Osprey Games and North Star Military Figures has been absolutely awesome in creating figures for their Frostgrave games. The above pictures are of the new plastic crew boxed set that comes out through North Star’s current Nickstarter. I have a box of these guys on order for myself.

I also like to proxy in miniatures from other companies into my Frostgrave games. When I received the French Bundle for Blood & Plunder from Firelock games, I fully intended to make the figures pull double duty as a crew in Frostgrave: Ghost Archipelago. Unfortunately, due to the prevalence of fire arms, the French boxed set would not be usable as a basic crew in Ghost Archipelago. There are too many figures armed with guns. Likewise, many of the Frostgrave Warbands that I run in the original game would run into the same problem.

That said, the figures from the Blood & Plunder Spanish starter set would be acceptable as a Ghost Archipelago crew (preferably, but not necessarily, using the optional rules for black powder weapons). I also found that the figures that I bought for Flint and Feather and the figures that come with the Conan Board Game both would work well as proxy crews for Ghost Archipelago. All of the plastic kits from the original Frostgrave game would also work well for the new game as long as you build the right quantity of standard crewmen.

Outside of my above selections, there is no shortage of what brands of miniatures one could use as a crew in Ghost Archipelago.

Overall, I am very excited about this game and am really looking forward to it coming out. The Nickstarter has also been hinting about the next three plastic boxed sets that we can expect for this game. So cool!!! The snake-men are the figures that I am most excited about outside of the generic crew box.

I hope everyone enjoyed this quick article.