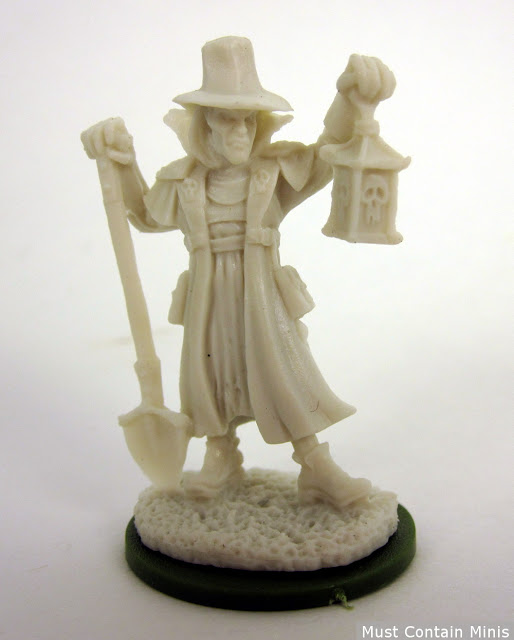 Today’s showcase is that of a Townsfolk Undertaker by Reaper Miniatures. I believe that I picked him up from RAFM Miniatures.

This is a nice looking miniature.

My paint job does not do him justice, but I wanted to go forward with this post anyhow to serve as a learning lesson to some of my readers (who might be just starting out) and as an interest piece for those more experienced with miniatures.

It started out very well. I followed my standard procedure of base coat, wash, and highlight. When it came to the highlighting though, I applied too much yellow while trying to achieve a lighting effect.

Because I have so many other projects on the go, this is the state in which he will remain.

Please feel free to leave behind constructive criticism that could help me or my readers. Try not to be mean as it can scare some people away from the hobby. Part of Must Contain Minis’ Mission is to encourage miniature gaming in general. One way to do this is to show that not all miniatures have to be painted ‘perfectly’ for us to enjoy our hobby and the games we play.

Now, let us take a look at the miniature that I painted….

For the most part, I am happy with how the model looks from the back. The lighting effect is subtle enough and nothing is too glaring other than perhaps the yellow lining on his left pocket.

A sharp-eye will pick out that there is a small air bubble under the left shoulder pad. I am not 100% sure what caused that bubble. I did rush this model because I wanted to use him in a game the very next day. Perhaps the bubble is from using the paint too thickly or maybe they were introduced when I shook my paints before using them. If you know what could have caused that bubble / hole, please leave a friendly comment below and suggestions for how to avoid them in the future.

Now lets look at this model from a couple of different angles.

In the pictures above, one can see that I went too heavy with the yellow in trying to create a lighting effect. In the past, I have done a very similar technique to good effect. The difference is that above I lined the yellow highlights instead of just dry brushing. As a result, not enough of the original pigment shows through. Check out my British Major below. The effect worked much better on him because the yellow is more subtle. I also added a picture of my Necromancer Apprentice from Frostgrave as I am really happy with the shading on that model and the glowing effect that I added from the gem. For the gem’s effect, I used the same technique, but with a different colour of paint.

Other Minis I Painted

While my Undertaker did not turn out as good as my Major or Apprentice (pictured above), he is still perfectly acceptable to use on the tabletop. In fact, I used him this weekend as my Necromancer Wizard in Frostgrave.

He looks just fine with the rest of his warband.

My Undertaker has already seen use in a new Frostgrave campaign and I plan to potentially use him in the new Frostgrave: Ghost Archipelago. This figure would also be great in Role Playing Games like Dungeons and Dragons or Pathfinder. What games could you envision using him in?

If you are wondering how I painted the Undertaker, below is a list of the colours I used.

As I stated before, that is where this model will finish. I have other projects to keep me busy. Let me know in the comments below if you have any tips or techniques that you would like to share with myself and my readers.

If you wish to help support Must Contain Minis, we have a sales affiliate relationship with DriveThruRPG and the Wargame Vault. If you make a purchase from either of those sites after using one of the links on this site, a portion of the sales goes towards supporting Must Contain Minis.